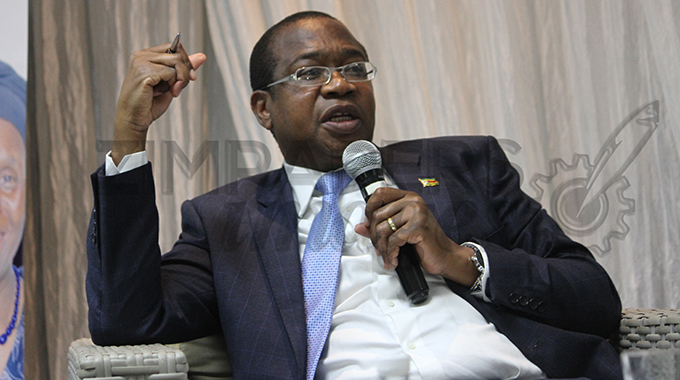 Tawanda Musarurwa
Senior Business Reporter
The modest reduction in Zimbabwe’s gross domestic product this year of minus 4,5 percent due to Covid-19, will be counterbalanced by growth of 7,5 percent next year as the Zimbabwean and global economies cope with the pandemic, the Treasury has predicted.

“In 2021, the economy is predicted to recover from a projected contraction of -4,5 percent in 2020 to a growth of 7,4 percent, driven by consumption (2,6 percent) and investment (5,8 percent) improvements,” said Finance and Economic Development Minister Professor Mthuli Ncube yesterday.

Launching the 2021 Budget Strategy Paper in Harare, a document expected to guide wider consultations on the upcoming 2021 National Budget, the Minister said: “The recovery in consumption is mainly anchored on expected stabilisation of inflation through ongoing policy interventions which should aid restoration of purchasing power of consumers.

“Employers including Government will continue to review wages and salaries in line with inflation developments and budget capacity to restore eroded incomes as the economy recovers.”

The 2021 Budget Strategy Paper marks the transition from the Transitional Stabilisation Programme, which is coming to an end this December, paving way for the longer term National Development Strategy from 2021-2025.

The stabilisation programme was designed to sort out the major structural fiscal and monetary problems inherited by the Second Republic, with success now seen in stable market-driven exchange rates and resulting low monthly inflation.

With the fundamentals fixed and distortions removed, the Government can now switch to rapid economic growth based on real increases in production.

“Accordingly, the 2021 Budget Strategy Paper (BSP) constitutes a valuable tool, meant to guide consultative discussions and sharing of ideas on national priority policies, programmes and projects for the forthcoming 2021 National Budget,” reads part of the document.

“Under the theme “Building Resilience and Economic Recovery Post-Covid-19”, the Budget Strategy Paper focusses on strengthening the economy to withstand any potential climatic (drought, cyclones, floods, pests) and macro-economic shocks, as we focus on attaining inclusive and sustainable growth towards Vision 2030.”

Monthly inflation is now falling to almost trivial levels and this will be seen in revised annual inflation predictions with the 12-month rate by year-end now expected to be 134 percent, down from the initial prediction of 300 percent.

This is a result of the high monthly inflation recorded in the last five months of last year fall out of the calculation to be replaced by trivial monthly rates already seen and predicted for the rest of this year.

Annual inflation measures the rise in the cost of living over the previous 12 months. With monthly inflation rising steadily from February last year until July this year, when it peaked at 35 percent, the running 12-month figure also rose in line with the monthly rates to a peak of around 837 percent.

But since the introduction of the foreign currency auction system, which has brought about macro-economic stability, high monthly figures from August and September last year have already been replaced by very low figures from the same two months this year, which in turn has seen the resulting annual inflation figures falling to almost 660 percent.

Even the 134 percent now predicted by year-end will be largely due to the rising monthly figures between February and July this year, after an anomalous very low January figure.

“The slowdown in inflation will be attributed to deepening of the foreign currency auction market which is expected to sustain exchange rate stability,” said the Minister.

“Reserve Bank of Zimbabwe is also expected to continue to curtail growth in money supply, which is one of the major drivers of inflation.”

The foreign currency auction system has brought about price stability as a good number of retailers and service providers are now utilising market-based pricing, and this is being reflected in recent inflation trends.

The stability has been predicated on the fiscal discipline of the Second Republic with Government living within its means, that is what it collects in taxes, instead of wild borrowing and then printing, in later years printing digitally, extra money and thus driving up money supply without corresponding increases in production.

The month-on-month inflation rate in September 2020 was 3,83 percent, reinforcing the dramatic fall seen in August, when it had fallen to 8,44 percent.