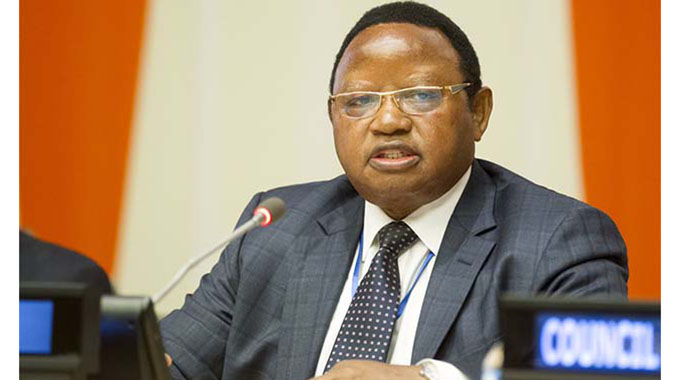 Foreign Affairs and International Trade Minister Ambassador Fredrick Shava will use his diverse background in labour, business, politics and diplomacy to help Zimbabwe fulfil its economic diplomacy agenda aimed at boosting the economy and international relations.

The overall aim is to facilitate economic and commercial exchanges between Zimbabwe and strategic partners, while also positioning local businesses to increase exports to a diversity of markets and attract sustainable investments from strategic countries.

Ambassador Shava, who was a Cabinet Minister in the 1980s and has been a senior diplomat in his lengthy public service, yesterday told an inaugural interface with editors from local and international media organisations that the media was critical in the attainment of his ministry’s mandate of promoting economic diplomacy, and the national vision of an upper middle income economy by 2030.

“I hope we can use this time to get acquainted and forge strong partnerships as we all seek to promote and protect the interests and image of Zimbabwe and its citizens,” said Ambassador Shava. “I am hopeful that together (the ministry and media) we will be able to correctly and rightly re-position our country within the broad community of nations.”

Together with his team, Ambassador Shava said he will strive to attain the set goals and objectives of the National Development Strategy 1 (NDS1) and would ensure his ministry “fully contributes” to the achievement of Vision 2030. To achieve the objectives, Ambassador Shava’s vision is to continue promoting President Mnangagwa’s foreign policy directives that he laid down in November 2017. The main pillars are of the directives are that Zimbabwe would be a friend to all and an enemy of none; that the country would pursue a policy of affirmation, engagement and re-engagement; and that Zimbabwe is open for business.

“In broad terms, the ministry’s strategies will include, but not be limited to increasing global visibility, building strong alliances at both bilateral and multilateral levels and boosting attractiveness by building a positive image to the outside world,” said Ambassador Shava.

Ambassador Shava intends to “build on the significant gains” registered in the past two and half years, which have seen some countries adjusting their views on Harare. The Foreign Affairs ministry plans to vigorously pursue its responsibilities that include enhancing Zimbabwe’s reputation as a reliable economic, trade and investment cooperation partner, and promote the country as an attractive tourism destination.

Further, the ministry plans to promote and expand Zimbabwe’s exports of a diversity of goods and services to a variety of markets, and to promote and facilitate foreign direct investment (FDI) into many sectors of the economy, including infrastructure development projects.

It was critical to reverse the downward trend in FDI inflows, and the ministry will ensure all its work contributes to the attainment of national economic development objectives, and strengthening Zimbabwe’s relations with the international community.

“Zimbabwe needs to reclaim its pole position of contributing significantly to intra-Africa trade. To achieve this, we will need to tap into the preferential market access opportunities we have in Africa under SADC, COMESA, the Tripartite Free Trade Area, and the African Continental Free Trade Area,” said Ambassador Shava.

“We also need to fully take advantage of duty-free access to markets in Europe and the UK. Focusing on export growth will enable us to offset the negative impact of sanctions to a greater extent.

“The 10 percent annual growth in exports that had been set before the coming in of Covid-19 can still be achieved at sectoral level. As such, the Ministry will support ZimTrade to achieve that.”

Government will also engage the diaspora, which contributed to economic development through remittances of over US$1 billion last year.

Zimbabwe National Editors Forum chairman Mr Dumisani Muleya said the decision by the ministry to engage the media was a “positive narrative”.

“That is what a responsible Government does,” he said.

Mr Muleya implored Government to take advantage of citizens’ hospitality to promote tourism, and leverage on endowments such as the Victoria Falls.

Veteran journalist and media consultant Mr Cris Chinaka said journalists should be factual in their coverage of news, and called on the Ministry of Foreign Affairs to continue engaging the media.