‘Economy has potential to recover’ 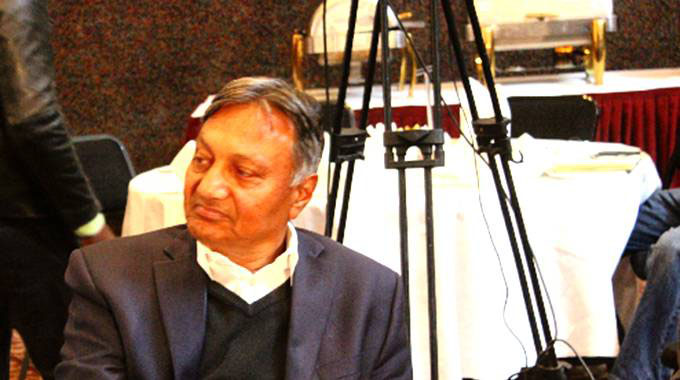 Africa Moyo Senior Business Reporter
TANGIBLE economic turnaround would be witnessed this year if Government remains steadfast in dealing with the twin terrors of fiscal deficit and the failure to implement proper foreign currency management systems.

This was said by prominent academic Professor Ashok Chakravarti in an interview yesterday.

Already, Government has set in motion plans to address the fiscal deficit side following the introduction of sweeping measures to curtail excessive Government expenditure.

Some of measures including sacking over 3 000 youth officers, effecting a 5 per cent salary cut for top Government officials and a moratorium on the importation of brand new service vehicles for Cabinet ministers and heads of parastatal.

Prof Chakravarti said the economy has great potential to recover this year if it solves its “two major problems”.

“There were two major problems that the economy was facing recently and if those problems are addressed, the prospects for economic transformation in 2019) would improve,” said Prof Chakravarti.

“Problem number is fiscal deficit and it has not been dealt with by the previous Government. However, the new dispensation and the new Minister of Finance (Professor Mthuli Ncube) are making serious efforts to deal with high Government expenditure and fiscal deficit.

“In fact, you will notice that in the last three months of the year, the deficit was close to zero. So that is very positive, they are dealing with that problem.”

Unrestrained expenditure by the previous administration has seen the country’s debt — both domestic and external debt — ballooning to about $18 billion. This has resulted in most international finance institutions declining to extend lines of credit to the country, which would have been critical in reviving the manufacturing, mining and agriculture sectors.

On its part, Government has embarked on a policy stance to gradually reduce the budget deficit to single digit level, and targeting 5 percent of GDP for 2019 and 4,1 percent next year.

The budget deficit is further expected to come down to 3 per cent in 2021.

Consistent with the national blueprint, the Transitional Stabilisation Programme (TSP), the 2019 Budget places emphasis on “living within our means by instilling fiscal discipline and rationalising expenditures in order to create additional financial capacity for funding developmental expenditures and enhancing delivery of public services”.

“As a first step, Government has decided that effective January 1, 2019, a 5 per cent cut on basic salary, be effected for all senior positions from principal directors, permanent secretaries and their equivalents up to deputy ministers, ministers and the Presidium.

“This is also extended to basic salaries of those in designated posts in State-Owned Enterprises (CEOs, executive directors and equivalent grades), including Constitutional Commissions and grant aided institutions,” said Prof Ncube in his 2019 Budget statement.

Government is also standardising or aligning remuneration including benefits for Constitutional Commissions, to remove inequity and disparities.

Prof Chakravarti said the second problem, which requires urgent attention, pertains to “monitoring the foreign exchange and cash side”.

“Like in Nigeria, it’s open, everyone knows and on a daily basis the price is fixed and the parallel market is dealt with. This is my recommendation,” said Prof Chakravarti.

Zimbabwe is battling a serious foreign currency shortage, which has seen delays in the processing of foreign payments, resulting in intermittent shortages of some key products such as fuel and cooking oil. Illegal dealers are keeping a tight leash on foreign currency exchange rates and willy-nilly increases the rates, resulting in wanton price increases.