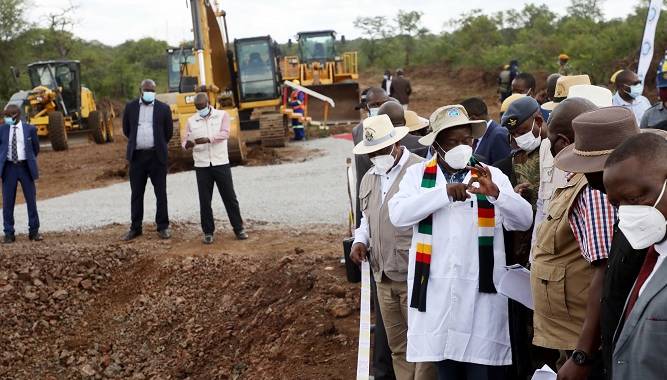 PRESIDENT Mnangagwa has said his administration will bring to fruition the over 100 years plan of bringing water from the Zambezi river to benefit the Matabeleland regions through the connection of the Matabeleland Zambezi Water pipeline.

The President was speaking during the commissioning of the Epping Forest Boreholes augmentation project and the ground breaking ceremony of the Gwayi-Shangani pipeline on Thursday.

The Epping Forest project was completed after Treasury availed $205 million towards resolving the water situation in Bulawayo where $130 million was used to rehabilitate and drill 30 boreholes in Nyamandlovu.

Government also allocated $535 million towards the commencement of work on the 245-kilometre  Gwayi-Shangani to Bulawayo Pipeline. whose completion is expected by December 2022. On completion, the pipeline will have the capacity to convey  an excess of 160  000  megalitres of water to  Bulawayo annually, a development that will improve the water and sanitation requirements of the city.

President Mnangagwa said the projects were a culmination of Government’s commitment to providing a permanent solution to Bulawayo’s perennial water problems.

“The Matabeleland Zambezi Water Project was identified way back in 1912 as a long-term solution to the water challenges faced in the Matabeleland North, Matabeleland South and Bulawayo Provinces. This project will become a reality during this Government.

“The first stage of the project, which is the construction of Gwayi-Shangani Dam, is already underway and on-course with a total of $4.5 billion allocated for the project in the 2021 National Budget, the dam will be completed by December 2021.

“The completion of these independent but inter-linked projects will ultimately spur economic production, productivity and growth as well as permanently resolving water challenges often experienced in the region,” said the President.

On the Epping Forest augmentation project, President Mnangagwa said they were a culmination of hard work and close collaboration between the Government, inclusive of ZINWA and the city of Bulawayo.

“This event thus attests to the power of a shared vision, unity of purpose and hard work,” said the President.

Speaking at the same event, Minister of State for Provincial Affairs and Devolution for Bulawayo Metropolitan Province, Cde Judith Ncube said the projects signaled a new era for Bulawayo, which has been going through its worst water crisis in recent years.

The Gwayi-Shangani dam pipeline will consist of two pipelines with a diameter of 1,2 metres with a capacity to convey up to 440 megalitres of water per day to Bulawayo.

It will have six booster pump stations at Gwayi-Shangani dam, Good luck, Ngamo, Umguza, Igusi and Nyamandlovu and will be discharging into a water treatment plant situated at Cowdray Park. The pipeline will have off-takes for irrigation and other uses along the way.