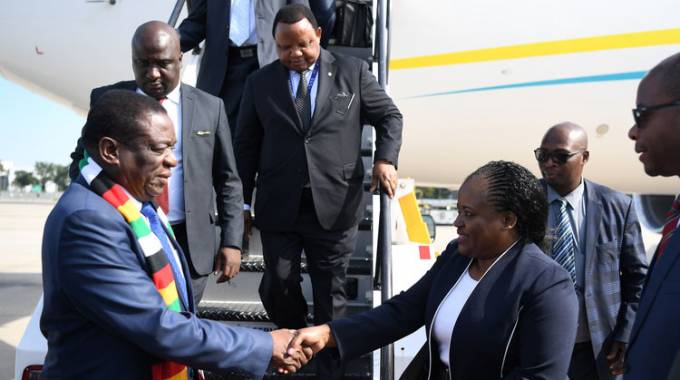 President Mnangagwa arrived here yesterday for the 74th session of the United Nations General Assembly, where topical issues that include climate change, renewable energy and environmental sustainability will be discussed.

He was met at John F Kennedy International Airport by Zimbabwe Permanent Representative to the UN Dr Fredrick Shava, his deputy Mrs Kumbirai Taremba and senior staff at the mission.

He is expected to deliver his address during the high-level General Debate this week, where he will continue to push for the removal of sanctions.

US-based December 12 Movement yesterday marched near the UN Permanent Mission denouncing sanctions imposed by the US against Harare.

It waved the Zimbabwean flag and placards urging Washington to act.

The movement said it would not relent until the illegal embargo had been removed.

The 39th Sadc Summit held in Tanzania last month resolved to set aside October 25, 2019, as an anti-sanctions day and escalate the lobby with the UN.

The General Assembly will bring together governments, the private sector, civil society, local authorities and other international organisations to develop ambitious solutions in six areas that include global transition to renewable energy, sustainable and resilient infrastructures and cities, sustainable agriculture, management of forests and oceans, resilience and adaptation to climate impacts, and alignment of public and private finance with a net-zero economy.

In his address to the nation before leaving for New York, President Mnangagwa said Zimbabwe would also discuss issues surrounding climate, as the country is still grappling with the effects of Cyclone Idai, which affected the country, Mozambique and Malawi, and the effects of climate change-induced drought.

“We thus have a direct interest in discussions and decisions which the nations of the world take on this very matter, which blight our prospects and retard the attainment of SDGs,” he said.

The issue will come under discussion tomorrow.

“I want to hear about how we are going to stop the increase in emissions by 2020, and dramatically reduce emissions to reach net-zero emissions by mid-century,” he said.

In recognition of the way young people are pushing for international action to stop climate change, a Youth Climate Summit was scheduled for yesterday.

All countries have made a commitment to achieve universal health coverage by 2030, which includes financial risk protection, high-quality health care services and access to safe, effective, quality and affordable essential medicines and vaccines.