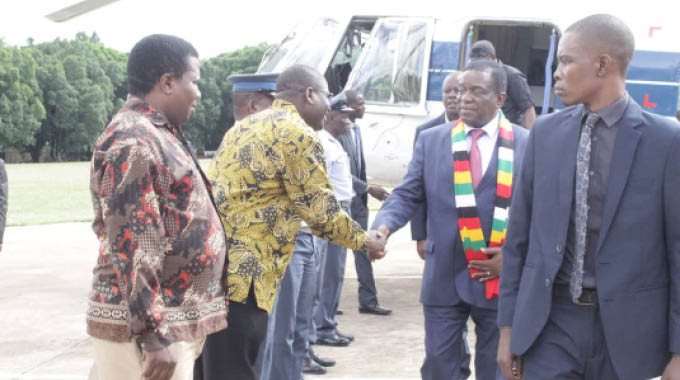 PRESIDENT Emmerson Mnangagwa today headlines the third annual National Thanksgiving and Dedication Service at the Zimbabwe International Trade Fair Grounds in Bulawayo, where he will join thousands of congregants in prayer.

The President arrived at the State House in Bulawayo yesterday afternoon aboard a helicopter and was met by service chiefs.

The church service is being organised by the Faith for the Nation Campaign — an inter-denominational grouping of local churches.

It is a platform where believers meet the country’s leadership to intercede for the nation.

Faith for the Nation Campaign chairperson Reverend Andrew Wutawunashe said the President was expected to outline his vision for the nation, so that the church prays for it.

“The National Thanksgiving and Dedication Service is an annual event which was inaugurated by the President in 2017, to be a time when we shall meet, on a platform of Faith for the Nation Campaign, so that we can have a thanksgiving for the nation as well as a prayer of dedication for God’s blessing for the following year,” said Reverend Wutawunashe.

“We do it as an inter-denominational group where all churches are welcome and the leadership of various sectors of our society like business and commerce, politics, chiefs and the general citizens attend for prayer and dedication for the nation.”

The event will be held under the theme: Counting our Blessings: Let us, through Home-Grown Unity, Affirm Work and Pray to Achieve our National Vision.

He said the service would be held at the Trade Fair grounds Hall 4 and everyone was free to attend.

The President, said Reverend Wutawunashe, would be given a platform to address people of faith about his plans for the coming year.

“One of the reasons we need the Head of State to attend is because that is a platform for him to explain to the nation the gains for which we can say ‘thank you’ to the Lord and spell out the challenges and vision for which we can pray for,” he added.

“In a way, as the church, we are making a statement that whatever disputes may be in the nation, we should be looking inwards to work for our own unity and resolution of whatever needs to be resolved.

“We feel that the culture of dialogue and communication with the President is the right direction and the unity of the nation has to be home-grown.”

Reverend Wutawunashe said prayer was one way the country could deal with the challenges it faced.

“When we say ‘affirm’ (in our theme) we are speaking to people who are detractors to the progress of the nation,” he said.

“This is because the vision that we have been given, specifically Vision 2030; the efforts that are being made to regularise our economy and develop into an upper middle-income economy may be painful, but there are signs of something good which is coming.

“The signs of a good and working economy are already there.

“But the problem is that the noises that are being made in the nation are as if the nation is not going anywhere. We are saying let us affirm together that vision, work to achieve it and let us pray so that we achieve our national vision.

“The Bible tells us that without a vision, people will perish. We have a President who has given us a vision, which is forward looking and inspiring. If only it could be affirmed and people stop opposing it for the sake of adversarial politics.”

He said business leaders and chiefs will also address the gathering, while musical groups such as Vabati VaJehova and Family Voices will provide entertainment.