ED heads back to Manicaland 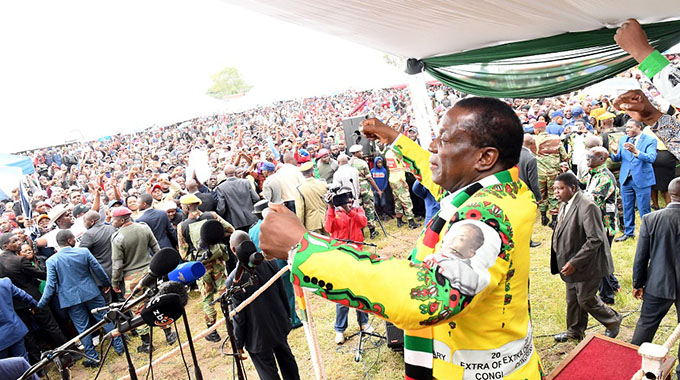 Felex Share Senior Reporter
President Mnangagwa heads back to Manicaland today for the ground-breaking ceremony of a 16 000-seater multi-purpose sports centre to be built in Marange. The Zanu-PF President and First Secretary will also use the opportunity to address the revolutionary party’s supporters in the area.

He was in the same province last Saturday where he addressed mega-rallies in Mutare and Buhera.
The rallies saw Zanu-PF flexing its mobilisation muscle with the Buhera rally held at Murambinda Growth Point being attended by over 30 000 people.

At the rallies, the President laid out his vision for the country in the next 12 years.
The rallies dwarfed all gatherings which had previously been held by the Nelson Chamisa-led MDC-T faction.
Mr Chamisa was at Murambinda two weeks ago where he addressed a handful of people.

Though many had framed the President’s meetings as an election campaign rally judging by the massive turnout, President Mnangagwa said the Zanu-PF campaign juggernaut was still to take-off.
He said he was on a mission to assess economic projects in the province.

“I can confirm that the President is visiting for a ground-breaking ceremony of some sports facility in Marange at St Noah School.

“It is a programme under Cde Kazembe Kazembe (Youths, Sports, Arts and Recreation Minister).
“They have targets in the ministry in terms of putting up sporting facilities for young people and this facility is one of those targets under sports development for the youths.”

Cde Kazembe weighed in: “St Noah of Marange are building a 16 000-seater multi-purpose sports centre and the President is going to officiate at the ground breaking ceremony. We have already initiated the construction of a low-cost tennis court which I commissioned.”

Cde Madiro said after the ground-breaking ceremony, President Mnangagwa would then address Zanu-PF supporters since the country was in an election period.

Zimbabwe is expected to hold harmonised elections by the end of July.
“Given that wherever the Head of State and Government goes or the leadership of the party visits, it is our duty to mobilise people to go and welcome the President,” he said.

“We are on the ground mobilising people to receive President Mnangagwa for the youth programme. Mind you, we are in an election period and this is not going to be an ordinary mobilisation.

“We are doing this massively so that the people get to know and hear for themselves the message from the President.”