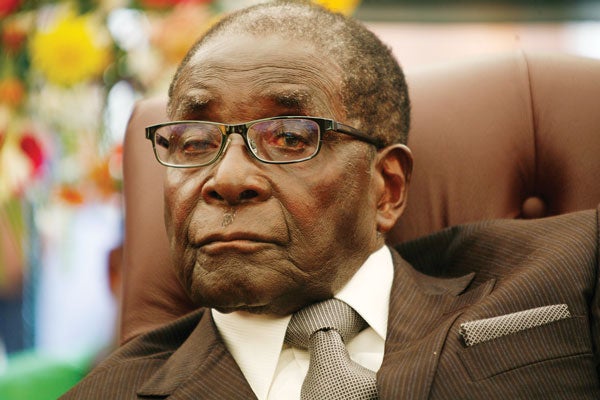 THE late former President Robert Mugabe has won his last fight from beyond the grave and will now be buried at his rural home in Zvimba in what is seen as an embarrassing snub to his successor Emmerson Mnangagwa.

Mugabe, Zimbabwe’s founding father, had been expected to be buried at the National Heroes’ Acre in a specially-constructed mausoleum, but the family, which had kept his body at his Blue Roof mansion since its repatriation from Singapore, where he died on September 6, got their wish.

His body was taken to Zvimba yesterday under police and military escort ahead of a private burial at the weekend.

The rural burial is seen as a snub to his former aide Mnangagwa and the military who kicked Mugabe out of office in a coup in November 2017.

Former First Lady Grace Mugabe has been leading a spirited fight in her husband’s corner even after Zvimba chiefs, led by Chief Zvimba, had insisted that he be buried at the national shrine amid allegations that they had received some money to push that position.

Information permanent secretary Ndavaningi Mangwana last night confirmed the latest development, saying the burial of Mugabe in a glass mausoleum had now been called off as the family opted for a traditional burial.

“The family of the late former President R G Mugabe has expressed its desire to proceed with his burial in Zvimba. In line with government policy to respect the wishes of families of deceased heroes, government is co-operating with the family in their new position,” he said.

Government will now stop the construction of the mausoleum because it is now of no use, Mangwana said.

“Why should we continue to construct it? What for? I have not yet communicated with the Public Works department, but at least it won’t be constructed for now,” he said.

“Bob died on the 6th of September 2019. What we have in the coffin are his remains, bury them where you want. Let’s stop this whole grandstanding with the body as if the old man will walk again. We all loved him, but he is gone forever. Allow the former President to rest in peace,” he tweeted when the news of the Zvimba burial broke out.

There was drama at the Blue Roof after the family called Doves Funeral Services for the hearse to come and collect his body.

Sources alleged Doves then alerted a government minister, who called family spokesperson Leo Mugabe, registering his displeasure at the family’s decision after earlier agreeing to have the former leader buried in a mausoleum at the National Heroes’ Acre.

“Leo Mugabe told the minister that there was nothing he could do because the family had agreed to have him buried at his rural home. He said he stood guided by the family’s decision,” a family source said.

The minister is said to have threatened not to process a burial order for Mugabe, but the family insisted they already had the burial document for Mugabe and nothing could change their final position.

Leo confirmed to NewsDay that Mugabe, who died at the age of 95, would be buried in Zvimba. “It’s true, but can you call me after 45 minutes,” Leo said, but was not picking calls thereafter.

It was after the government minister’s call to Leo that some police details went to Blue Roof to block the family from taking the body off to Zvimba until government finally conceded defeat and issued a statement that it would now respect the family’s wish.

Last Friday, Grace kicked out chiefs from her Blue Roof mansion after accusing them of trying to connive with government to use her former husband’s body for personal gain.

On Monday, South African opposition Economic Freedom Fighters leader Julius Malema gave a brief of what was in the offing when he accused President Emmerson Mnangagwa and his government of trying to ride on Mugabe’s legacy by burying him at the national shrine and defying his wishes.