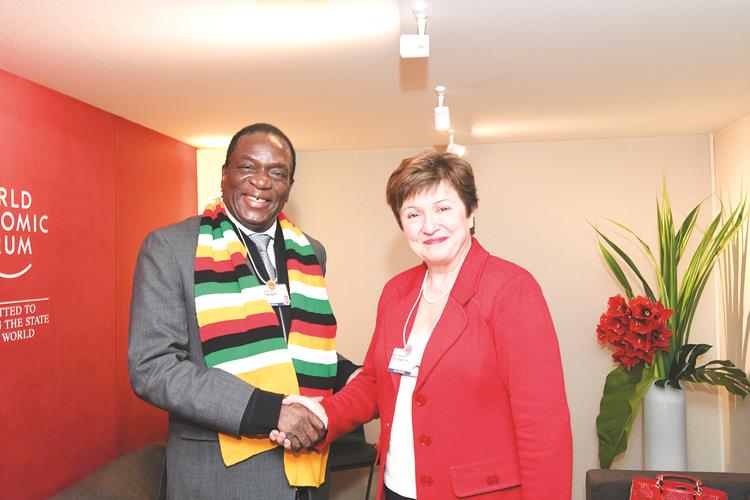 From Happiness Zengeni in DAVOS, Switzerland—
President Mnangagwa yesterday held high-level meetings with top officials from the world’s top multilateral financial institutions on the sidelines of the 48th World Economic Forum (WEF) as he continued with his drive to re-engage with the international community. He met top officials from the International Monetary Fund (IMF), World Bank (WB) and the African Development Bank (AfDB).

She commended the President’s efforts to work towards normalising the country’s re-engagement with the international community. “International Monetary Fund (IMF) Managing Director Christine Lagarde today met with President Emmerson Mnangagwa of Zimbabwe on the sidelines of the World Economic Forum in Davos. 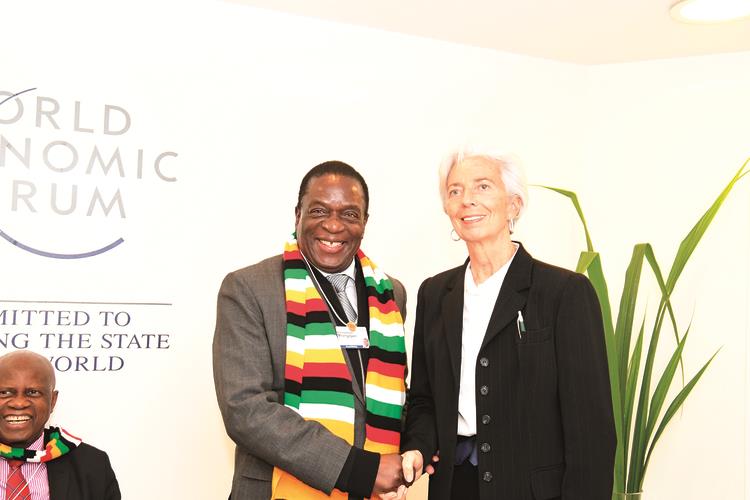 “Madame Lagarde welcomed President Mnangagwa’s commitment to stabilising the Zimbabwean economy and working towards normalising the country’s engagement with the international community. She reiterated the IMF’s commitment to continue to support Zimbabwe as it addresses its economic challenges,” IMF said.

President Mnangagwa also met AfDB president Dr Akinumwi Adesina, with the AfDB boss saying the meeting was excellent. The two discussed several areas of importance to President Mnangagwa. “It was fantastic to meet with the President and I did commend him for the reforms he has put in place. We as the African Development Bank have always been there for Zimbabwe and continue to be there for Zimbabwe.

“We discussed several areas of importance to the President. Agriculture is very important to him, to create jobs and revive rural economies.

“We discussed his interest with regard to infrastructure development in terms of rail development, road development and connecting Zimbabwe to the ports, Beira Port and all of that. The President also mentioned his keen interest on the issue of tourism to make sure that we revive tourism.”

Further, Dr Adesina said they also discussed job creation for the young people of Zimbabwe, as well as the issue of Zimbabwe’s AfDB arrears clearance. The AfDB president said President Mnangagwa showed dynamism, passion, focus and commitment to addressing the issue of arrears to the bank.

“And obviously, we also discussed how to push forward on macro-economic stabilization for Zimbabwe and the whole issue of how we can create more incentives for a better environment in Zimbabwe.

Overall, it was a very excellent meeting, I was very encouraged. We discussed so many things with the President and I am sure that with his dynamism and focus, passion and commitment, Zimbabwe will succeed.”

Further, the President held discussions with officials from the Investment Corporation of Dubai, a State-owned holding company that can be characterised as a sovereign wealth fund owned by the government of Dubai, United Arab Emirates.

On the economic front, Mr Charamba said President Mnangagwa briefed President Berset about amendments to the Indigenisation Act, availability of minerals for investors, tourism and manufacturing.

Nestle Zimbabwe, whose headquarters are in Switzerland, has invested close to $30 million in the past 6 years for refurbishment and upgrading of its cereals and milo plants and equipment to increase production

The President also suggested that Switzerland could use Zimbabwe as a dairy products distribution hub the same way Nestle has done with New Zealand. He also briefed the Swiss leader on the legislative measures Government is taking to make the country more investor friendly.

Mr Charamba said President Mnangagwa told his counterpart about Zimbabwe’s unique economic situation. The fact that growing exports was critical for Zimbabwe; that it had abundant minerals, but was a net exporter of raw commodities and net importer of critical consumables.

President Mnangagwa, said, Cde Charamba, pointed out that it would be critical if the European country assisted the Southern African nation to value add its produce. President Mnangagwa highlighted the point that Zimbabwe’s greatest potential lay in attracting foreign investment into mineral resources.

He told his counterpart that the country had the world’s second largest platinum reserves after South Africa, and a host of other minerals like diamonds, coal, nickel and chrome.

Mr Charamba also said President Mnangagwa stressed the point that that his Government would put emphasis on dialogue with investors “so that we get to know which areas are of concern to investors that may have escaped our attention and that there was readiness to engage with a view to effecting the necessary legislative adjustments”.

“(President Berset) said they would support Zimbabwe. In terms of the issue of sanctions they are aware that former President and his wife, some service chief and of course ZDI were still in sanctions and that these sanctions were being reviewed periodically,” said Mr Charamba

“President Berset said with development back home there was a positive disposition within the European Union (EU), which is the furthest he went in signaling that they will be supporting Zimbabwe.”