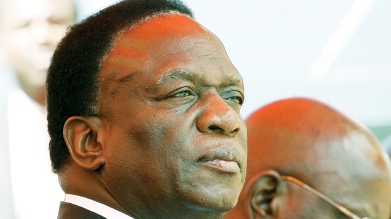 HARARE – “Given the mood within the government workforce and the country at large, it would be wise for the government to abandon its bully tactics and take the demands of the workers seriously to avoid situations that could bring chaos into the country. Threats and other forms of intimidation, as seen coming from some sections of the Zanu PF party, are misguided and unhelpful to the government,” the Standard advised.

“Mnangagwa needs to take charge and make bold decisions including dealing with the currency crisis to take Zimbabweans out of this misery.”

This advice makes as much sense as advising the farmer to bolt the stable door when the proverbial horse has already bolted!

Yes, the worsening economic meltdown is causing serious suffering and deaths amongst the millions now living in abject poverty. The economic situation is so bad there is a real danger of the country descending into social and political unrest and chaos.

But here is the crux of the matter; while there were many things Mnangagwa could do and should have done to revive the country’s comatose economy after taking over in the November 2017 coup. The tragic reality is he has done very little and, worse still, he has done many bad things too. He had his many golden opportunities to save Zimbabwe and he has wasted them all.

Mnangagwa started well with his “Zimbabwe is open for business!” call. After decades of the usual anti-business rhetoric and laws from Mugabe, here was a Zanu PF leader keen to create a friendly economic environment to attract local and foreign investors.

But given that Mnangagwa had been Mugabe’s right-hand man for donkey years, it is not surprising that the investors held back to see if Mnangagwa was the democrat he claimed to be. The acid test was whether Mnangagwa would keep his promise to end corruption and hold free, fair and credible elections.

In 2016, Mugabe admitted that nation was “swindled” of $15 billion in diamond revenue.

He never arrested even one swindler or recovered a penny.

A year after the admission, the then Finance minister Patrick Chinamasa, told Parliament that government was receiving 1/6 of the expected tax revenue from the diamond mining, thus confirming the looting was still taking place.

It is now over a year and still not even one diamond swindler has ever been arrested and not one dollar of the looted billions recovered.

The wholesale looting is still taking place to this day!

When it came to polls, Mnangagwa contemptuously dismissed those calling for the implementation of the democratic reforms necessary for free, fair and credible as barking dogs.

“Zanu PF ichatonga! Igotonga! Imi muchingovukura! nokuvukura!” (Zanu PF will rule! And rule! Whilst you (calling for reforms) bark! And bark!) Mnangagwa boasted on many occasions. This is music to the ears of his Zanu PF coup plotters and hardliners.

So rigging the July 30, 2018 elections was to Mnangagwa and company, phase two of the Operation Restore Legacy.  However, by blatantly rigging the elections Mnangagwa confirmed that Zimbabwe was still a pariah State.

He could not have done more to scare away local and foreign investors he had been wooing with his “Zimbabwe is open for business!” call.

It is all very well to advise Mnangagwa “to take charge and make bold decisions including dealing with the currency crisis”.

Bold decisions can change the political reality that Zimbabwe is a pariah state. And as long as Zimbabwe remains a pariah state there is no hope of any meaningful economic recovery.

It is for us, ordinary Zimbabweans, to make our bold move. We must demand the full restoration of our freedoms and basic human rights including the right to a meaningful say in the governance of the country. We must demand that only those with the people’s democratic mandate to govern Zimbabwe will govern the country.

We all know the root cause of Zimbabwe’s economic meltdown and political paralysis is the de facto Zanu PF one-party dictatorship.