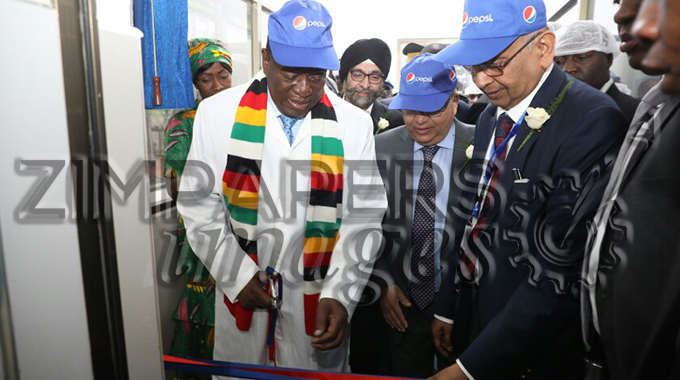 Zimbabwe’s economy is on the right path and Government continues to craft policies to protect investments, while creating an environment for business to thrive, President Mnangagwa has said.

He said this while officially opening the second phase of Varun Beverages’ manufacturing plant, installed at a cost of US$20 million, in Harare.

Varun Beverages is the world’s second largest franchise (outside the US) of carbonated soft drinks and non-carbonated beverages sold under trademarks owned by PepsiCo.

It produces brands that include Pepsi, Mirinda, Mountain Dew, Sting and Seven-Up, among others.

President Mnangagwa said the Government would continue opening up the economy for investors.

“We are moving in the right direction by opening up and allowing protection of investments in Zimbabwe and creating economic space for business to thrive and those who have talent among us should be allowed to exercise that talent.

“This investment feeds into our national Vision 2030 and complements milestones committed in the 2020 National Budget, gearing for higher productivity, growth and job creation, especially for women and youths,” said President Mnangagwa.

He commended Varun Beverages for the confidence it had shown in the country through continued investments.

“In 2018, I commissioned a US$30 million bottling plant and today, I congratulate and applaud Varun Beverages, for establishing yet another state-of-the-art plant and additional production lines with a total (value) of US$20 million.

“This additional investment shows the continued trust and confidence Varun has in doing business in Zimbabwe. My Government will continue to create an enabling environment to ease the convenience and cost of doing business and ensure that the country is a safe, attractive and competitive investment destination.

“This drive is already bearing fruit, with the World Bank acknowledging Zimbabwe as one of the top global improvers in 2019.”

The World Bank named Zimbabwe as one of the “top 20 improvers” in Doing Business 2020 following key regulatory improvements in five areas, which include starting a business.

“As such, the long-awaited ZIDA Bill was passed by Parliament on Wednesday this week. This will go a long way in facilitating investment and the frameworks contained therein are aimed at increasing the convenience of those who would want to invest across all sectors,” said President Mnangagwa.

He urged local businesses to take advantage of Government’s engagement and re-engagement policy to find partners who were eager to invest in Zimbabwe.

The President urged the company to fully exploit opportunities availed by the devolution policy which Government is implementing.

“I call upon you and other investors to take advantage of Zimbabwe’s geo-strategic location to develop vibrant export strategies. Sadc, Comesa and the African Continental Free Trade Area are markets in which Zimbabwean-produced products must have a strong presence.”

“We are very happy to announce that we added three production lines besides the first PET (polyethylene terephthalate) line,” Mr Jaipuria said.

He said his company employed over 1 000 people while 1 500 women had been empowered through the allocation of vending trollies.

“There are 20 000 retailers and vendors who get Pepsi products across Zimbabwe. The happy 22 000 families benefited directly and indirectly from Varun Beverages.”

Varun Beverages has become the biggest beverages supplier in the Zimbabwean market, with a strong presence in the remotest parts of the country.