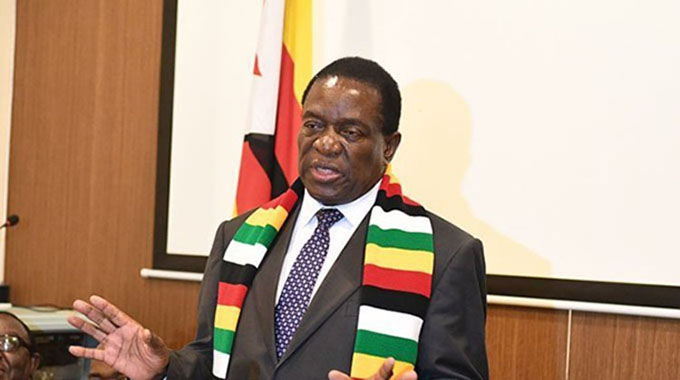 President Mnangagwa made the remarks while addressing the Zanu-PF National Women’s League Assembly in Harare on Friday.

The Head of State and Government said the extended support for women’s community projects, which will mainly cover rural areas, will benefit all women, regardless of political affiliation.

“The women’s league has proposed to embark on many projects particularly in the rural areas. I fully support that initiative,” he said.

“In the Ministry (of Women Affairs, Gender and Community Development) there is department for community development. I want to see our budget allocating more funds for that department.

“These projects should not only assist Zanu-PF party members, but all the women in their respective communities.”

President Mnangagwa added: “Let the young man and young girls at that level be made busy. How do you make them busy? They must start projects and demand support from Government. Projects designed to develop not only their well-being but the community, then it is easier for us to channel resources which change the lives of that people at that level.”

The President encouraged women to participate in devolution programmes, saying development should start from the bottom tier of society.

He said Vision 2030 was unattainable without support of the people in the rural areas.

The President implored women to think big when embarking on community projects so that they can eye export markets.

He said his administration supported honest work and urged the women to shun corruption.

President Mnangagwa said he was agreeable to a request made by the Zanu-PF Women’s League to expand the Presidential Inputs Scheme, which provides free agriculture inputs to communal farmers.

“Your leaders have also requested that under the Presidential Input scheme, we provide free inputs for soya beans, wheat and sunflower. I am going to engage with Minister Perrance Shiri to see if we can come up with solutions to respond to your request,” he said.

Speaking at the same occasion, Zanu-PF Secretary for the Women’s League, Cde Mabel Chinomona, said the organ fully backed the decision by the Youth League to call for the investigation of individuals named for alleged corruption.

“As women, we support what the youth did. We know other people who were named are complaining. That is why there should be an investigation. As a result, there is nothing for them to worry about,” she said.

“We would also want to commend you President for the decision to constitute a commission of inquiry into the allegations.”

Cde Chinomona, who is also Senate president said the Zanu-PF Women’s League was behind the President and wants him to represent the party as its Presidential candidate in 2023.