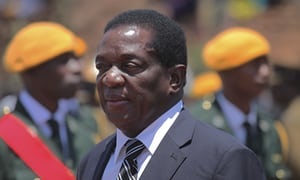 In a surprise move which betrays anxiety about President Emmerson Mnangagwa’s safety, authorities have once again reshuffled his personal security team while also expanding it to include Air Force personnel, the Daily News on Sunday can report.

This comes as investigations into last year’s Bulawayo bombing — in which Mnangagwa narrowly escaped an apparent attempt on his life when an explosion rocked a Zanu PF rally that he was addressing at White City Stadium — have seemingly hit a dead end.

After the Bulawayo incident, the government hastily moved the

76-year-old Zanu PF leader from his modest private home in Harare’s leafy suburb of Helensvale to State House, which had been under-going renovations at the time.

Authoritative sources told the Daily News on Sunday yesterday that Mnangagwa had rejigged his team again, following wholesale changes that were made to the security sector when he first took over the reins from ousted former president Robert Mugabe in November 2017.

The Police Protection Unit (PPU) had traditionally provided the presidium with aide de camps, but this role had been delegated to the Presidential Guard which falls under the Zimbabwe National Army, after Mugabe’s stunning fall.

In the latest changes, Mnangagwa is said to have removed members of the army who had been his aide-de-camps since November  24, 2017.

According to the well-placed sources, Mnangagwa had moved to promote his former security aides to the ranks of brigadiers, before reassigning them elsewhere.

The changes were evident last week when Mnangagwa held a reception at State House for diplomats accredited to the country.

“You will have noticed the new team of aide-de-camps last week who had become part of his close security … and they were wearing suits, except for the uniformed Air Force bodyguards whose presence there may have taken some people by surprise.

“There are always regular reviews of the security of VIPs, and these kinds of changes of security personnel happen after such assessments,” one of the sources said.

Mnangagwa’s spokesperson George Charamba told the Daily News on Sunday that there was nothing amiss about the new changes to his boss’s security arrangements, including the addition of Air Force personnel.

“The commander-in-chief is exactly that, namely for all the pillars of the ZDF (Zimbabwe Defence Forces).

“That means his support team is a microcosm of the arms of the ZDF,” Charamba said.

But it also emerged yesterday that apart from shuffling his team again, Mnangagwa had also added elaborate security measures and protocols which were evident last week at the State House function for diplomats.

Apart from going through body scanners, his own staff — including all security details — now also have to pass the test of sniffer dogs, which have been introduced to vet people around him.

At his rallies, Mnangagwa’s security team has also lately  introduced fences and barriers to keep the party’s supporters as far away from their leader as possible.

Over and above this, the government has also introduced other advanced security measures, including the use of drones at political rallies to protect Mnangagwa and to secure the lives of all attendees.

Mnangagwa narrowly escaped injury when an explosive device was detonated as VIPs left the stage at a Zanu PF campaign rally at White City Stadium on June 23 last year.

Then, he had just finished his address to thousands of party supporters, at the same venue of his penultimate humiliation on November 4, 2017 by Mugabe and his then influential wife Grace.

The explosive device, suspected to be a hand grenade, went off moments after Mnangagwa had just stepped off the stage — seriously injuring one of his deputies Kembo Mohadi and senior Cabinet minister Oppah Muchinguri-Kashiri, as well as a host of other people.

Both Mohadi and Muchinguri-Kashiri were later airlifted to South Africa for specialist treatment.

Mnangagwa, who has survived multiple attempts on his life, blamed the Bulawayo attack on the vanquished Generation 40 (G40) Zanu PF faction — which was involved in a war of attrition with him in the ruling party’s deadly succession wars of the past two decades.

“I don’t know whether it was one individual — I would think it is broader than one person.

“I would think this is a political action by some aggrieved persons,” he told the British Broadcasting Corporation in an interview after the explosion.

Asked further whether he trusted Grace or not, he retorted: “On what basis would I trust someone who was used by a cabal to say things that had no basis?”

The annihilated G40 was, before the military coup of November 2017, locked in a bitter war with Mnangagwa and his supporters for the control of both Zanu PF and the country.