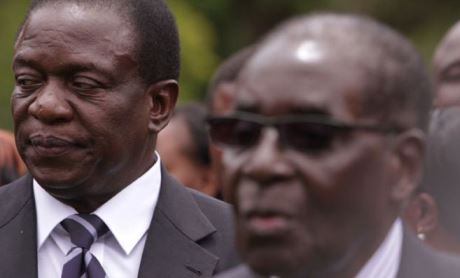 While Zimbabweans had hoped that the fall of former president Robert Mugabe last year would herald a new era, recent events where the State responded viciously to citizens’ protests — killing 17 in the process — has taken them aback.

Analysts canvassed by the Daily News on Sunday said Mugabe’s successor — President Emmerson Mnangagwa — and his administration have remained attached to the 95-year-old teetotaller’s umbilical cord in a classical case of new wine in old bottles.

Political analyst Gladys Hlatywayo said expecting a radical shift to democracy from Mnangagwa who is the architect of Mugabeism — having been the enforcer for the 95-year-old former strongman for more than three decades — is the highest level of political naivety.
“The problem is with people who expected to harvest apples from a thorn tree because Mnangagwa is incapable of reforming,” Hlatywayo said.

During the struggle for independence from Britain in the 1970s, Mnangagwa was assigned to be Mugabe’s assistant and bodyguard, accompanying him to the Lancaster House negotiations in London, which resulted in Zimbabwe attaining independence in 1980.
After independence, Mnangagwa held a series of senior Cabinet positions under Mugabe.

From 1980 to 1988, he was the country’s first minister of State Security, and oversaw the Central Intelligence Organisation, among several other portfolios he held until the November 2018 coup which saw Mnangagwa succeed his mentor. Hlatywayo insisted that because Mnangagwa is leading a group of hardliners that used to, along with him, block democracy on several occasions during Mugabe’s rule, it is next to impossible to reform.
“They have clear footprints on Zimbabwe’s darkest moments, including Gukurahundi and the 2008 massacres.

“They are architects of violence and brutality. What we see today in terms of August 1 human rights abuses and the recent clampdown on opposition and civil society is a continuation of their wicked ways. We must brace up for more State-sponsored human rights abuses. The so-called ‘new dispensation’ is a sick joke”

Another analyst Rashweat Mukundu said Mnangagwa is not only following in Mugabe’s footsteps but has also worsened the culture of impunity whereby the army now brazenly abuses citizens.
“While Mugabe used the police to beat and arrest, Mnangagwa simply uses soldiers in his words to bring order,” Mukundu said.
“That order unfortunately means the death of tens of people and injuries to as many. The new dispensation is a continuation of the past warts and all”.

After nearly four decades as Zimbabwe’s supreme leader — Mugabe routinely unleashed violent youths, war veterans and law enforcement agents to crush dissent.
At the height of his power, he even boasted at one time that he and Zanu PF had “degrees in violence” — in mortifying comments which shocked the world. Mukundu said statements by Mnangagwa last week while addressing a Zanu PF rally in Mwenezi where he threatened to be ruthless with dissent was representative of the Zanu PF thinking under him.

“This statement demonstrates that Zimbabwe has not moved from the past despite attempts by Information minister Monica Mutsvangwa to white-wash Mnangagwa’s statements.
“Those statements must be taken seriously in light of the events of August 1, 2018 and also January 2019 in which tens of people were killed, hundreds injured and others arrested. “Essentially, we have a president who has declared war on his opponents and this does away with the cheap talk on dialogue and Zimbabwe being a democracy. “Zimbabwe is a military state in which the president prides in unleashing soldiers on unarmed civilians and threatens human rights defenders.”

Mnangagwa told his supporters last week at a rally in Masvingo that he is ready to thwart any form of demonstration against his government. “They (the MDC) are planning violence but we would like to say to everyone in the country that if you are against peace, be part of them those who want peace, stay at home, so that we deal with those that want violence. We will deal with them. If you are invited to the demonstrations don’t join them,” said Mnangagwa.
Last month, disgruntled workers downed tools in protests to fuel price hikes and the ever increasing cost of living that has rendered many people’s salaries useless.

To quell the protests, Mnangagwa dispatched the military in a clampdown that was condemned by the western world due to its heavy-handedness as well as reports of rape and torture of unarmed civilians.

When Mnangagwa’s administration came to power via coup in November 20 it immediately set out to win the hearts of the international community which had isolated the country in protest over then Mugabe’s angry mob policies. Mnangagwa has particularly sought to project himself as a liberal by inviting foreign investors to come to Zimbabwe to do business with no strings attached under the “Zimbabwe is open for business” mantra.

However, Mnangagwa has presided over the death of civilians following the August 1 fiasco as well as the violent protests that led to the death of 17 civilians at the hands of the State.
Renowned academic and political analyst Maxwell Saungweme said: “He (Mnangagwa) is not following Mugabe’s footsteps but continuing with what he was doing as his foot soldiers and hangman. He is new wine in old bottle. A new face with an old spirit.”
“You can’t say we are open for business and re-engaging while saying everything to eviscerate the spirit and principles of re-engagement. He is clueless.”