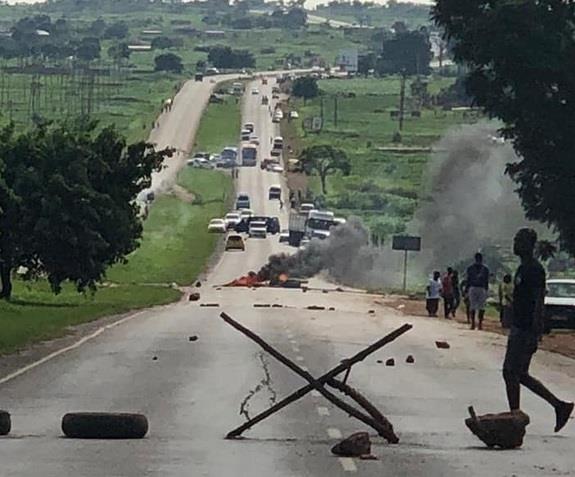 HARARE – A Zimbabwean businessman has urged government to raise wages in a bid to prevent the meagre income of public sector workers becoming a source of anger for citizens.

In a letter to President Emmerson Mnangagwa seen by the Daily News, businessman Frank Buyanga said the hike will preempt “the game by your opposition.”

This comes as thousands of Zimbabweans took to the streets of the capital and the second city Bulawayo on Monday, demanding the government reverse the doubling of fuel shortages and raise wages amid clear indications wages had become uncompetitive in the face of rising costs of basics and transportation.

In the capital Harare, there were boulders blocking roads leading to the city centre and tyres burning along feeder roads in a rare protest against a hike in fuel prices that has stirred discontent over sluggish economic growth and weakening purchasing power.

The country’s largest labour unions ZCTU is leading the three-day stay away to press their case for US-dollar denominated salaries and improved social welfare.

“Your Excellency, our economy can and will be better. It is my firm belief that there are those waiting to see Zimbabwe gets into turmoil and blame you. Mr President, it is my humble suggestion that you increase the salaries of our civil servants with immediate effect,” the letter said.

“This can be communicated at a selected location with all local and international media present. Mr President, Ecuador, Venezuela and Argentina have as an example, Your Excellency, increased salaries of their people in the midst of a devastating economic crisis.”

Last September, the crisis-torn Venezuela government of President Nicolás Maduro increased the minimum salary by nearly 3 500 percent in one fell swoop, and also banned stores from increasing their prices in order to cover the increases in salaries, arguing that it was not necessary.

On the other hand, Ecuador has imposed a government-mandated minimum wage of US$5 680 per annum, and no worker can be paid less than this, with employers who fail to pay the minimum wage subject to punishment by the government there.

In Argentina, the government in November approved a 30 percent median salary increase for public sector workers to reviews to counter crippling impact of inflation.

The letter to Mnangagwa said: “The first thought that comes to mind is what will come of our inflation figures as a state, but I would like to stress that whilst inflation is an evil there may be short term good in inflation. Ours is a man-made crisis, that we will overcome.

“Mr President, with this move you are preempting the game by your opposition. They have indicated that they want to destabilise your leadership through demonstrations but with this, they will be neutralized.”

The letter said the economy is being held hostage mainly by “private sector malpractice” hinging on corrupt public officials “who think it is business as usual as continue with impunity destroying our country.”

“If the government increases the wages of its workforce, the private sector has no choice but to follow suit. This again can be chartered through government or business dialogue. There is an effervescence in the private sector – a gradual but definite shift to dollarise the economy. Mr President, Zimbabwe’s capacity to generate foreign currency through exports, is still low and inadequate to meet demand.”

A quick glance of Zimbabwe’s economic data shows that that amongst Small Medium Enterprises (SMEs) that constitute the vast informal sector, less than 10 percent access foreign currency through official channels.

Buyanga said Zimbabwe is at this immediate stage not ready for dollarisation.

“Your Excellency, this will make it harder for the informal sector and the SMEs to access foreign currency. Whilst dollarisation seems to be the paraded solution do we have the institutional capacity to monitor our financial markets and avert abuse like capital and deposit flights?

“There is need for us, maybe to have short-term measures in place and formulate a broad-based consultative forum which deeply introspects and reflect on Zimbabwe as an economy and where we are with regards to certain key fundamentals; bonds markets, FX markets, cash, equity markets, direct foreign investments, the mandate of our central bank.

“There are various fundamental flows as we relate to these as a geo-economic politic, me and other Zimbabweans both at home and the diaspora will be willing to add value to such an initiative.

“Among objectives will be to come back to yourselves with recommendations which if we are to adopt and incorporate in any future economic blueprint we should prevail as a nation.”

He said urban public sentiments out there was that Zanu PF is not delivering and “this is contra-productive to the concerted efforts you have made to remediate our dire situation.”

“Your Excellency, we are ready to serve our country and we are more that prepared to assist you in all areas of advice and sectorial consultations,” the letter said.

The demands add to pressure on President Mnangagwa to improve the lot of low income workers hardly six months after disputed parliamentary and presidential elections.

He said he was “a sincerely concerned citizen”, wishing to put forth  “humble ideas and concepts which can help us in part overcome the currency issues we find ourselves face with.”

“I have toyed with many ideas which I believe have caused the issues affecting our great nation, but I do not want to dwell on these as I will come across as if I am teaching you about politics, law and history – areas which I know are not only your forte but also that of other distinguished gentlemen who you have appointed to serve in different ministries and state bodies to drive our agenda forward.”

Mnangagwa’s government no longer enjoys strong popular support but is also known for having little tolerance for dissent. Monday’s protests were met with heavy-handedness, with water cannon firing volleys of pepper spray at protesters and tear smoke fired, with two people said to be shot in the clashes.

The Daily News understands the under-pressure government is seriously considering a salary increase probably this week after the exhortations.