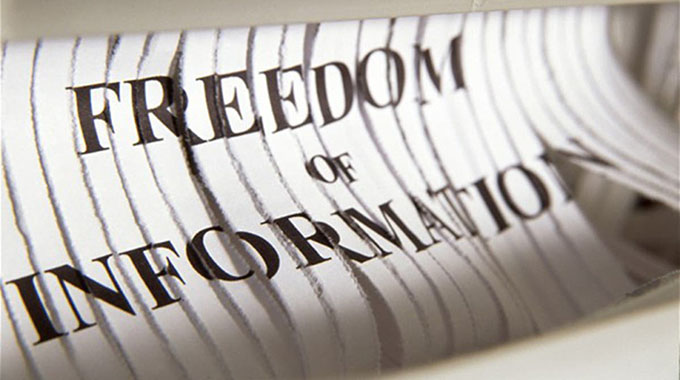 The new Freedom of Information Act is welcomed for two outstanding reasons: On the positive side it does actually give Zimbabweans a right to know a lot of things that they really should be able to find out, and it gets rid of the Access to Information and Protection of Privacy Act (AIPPA) that did neither function expressed in its title.

AIPPA came into the law books during a low point in the First Republic, and was designed to control access to information, control the media and license in an arbitrary way just who was allowed to write or publish.

But it did have one long-term benefit: it made people think. There was a determination when the present Constitution was being written to ensure that any attempt to continue with that sort of legislation, or to replace it with something equally obnoxious, was doomed.

And with the advent of the Second Republic, President Mnangagwa made it clear that something that fitted the Constitution in spirit, as well as the letter of the law, was to be drafted.

This replacement process took longer than some might have expected, not because of a desire to delay, at least in the Second Republic, but because everyone not only wanted AIPPA to vanish, but also wanted the positive rights enshrined in the Constitution to be turned in practical law.

A right is a right, but if it requires expensive teams of lawyers and a multitude of cases in the Constitutional Court to become an effective right, the ordinary person can lose out. For a right to be of use to us and you it must be enforceable and usable. So there was a long process to consult all shades of opinion and then hammer out a clear and transparent legal document that turned a theoretical right into an actual realisable right that anyone could use simply and effectively to get the information they desired within a defined time frame.

A lot of the final drafting was done by a Parliamentary portfolio committee, representing all shades of opinion in Parliament and under the chairmanship of one of the more effective and experienced opposition MPs.

The committee, which used its right to summon policy makers and experts, went through the initial drafts from the overall goals right down to the nitty gritty details.

Most importantly, the committee decided to work by consensus. No one was outvoted on any matter. Each point was debated and discussed until everyone agreed that the result was what was needed and what was wanted.

This is lawmaking at its theoretical finest, and provides an example of best practice that could easily be applied to a lot of other legislation.

The final result, which shot through Parliament without dissent and has now been signed into law by President Mnangagwa, will serve the people of Zimbabwe, rather than impose anything on the people.

It starts with the belief that just about everything in the public sphere can potentially become a matter of the public record, and that everything in the private sphere that concerns enforcement of other rights can be made public. Outside the proceedings of the Cabinet, which are secret in all countries, and the more lurid details in a victim friendly court, any withholding of public sphere information must be backed by a very good reason, and those reasons are carefully listed.

The Constitution does allow some restriction: “Legislation . . . may restrict access to information in the interests of defence, public security or professional confidentiality, to the extent that the restriction is fair, reasonable, necessary and justifiable in a democratic society based on openness, justice, human dignity, equality and freedom.”

For a start every entity in the public and private spheres now needs a designated information officer, who is automatically the head of the entity if no one else is appointed.

The assumption is that requests for information can be granted, with the allowable fees being just for cost recovery, not to make profits or keep people away through high pricing.

But if a request is refused, in whole or in part, then the information officer has to give chapter and verse and the reasons for the refusal. A general statement is no use. And that reply has to be given within three weeks, unless an extension is granted, and even that extension is limited and can only be based on the man-hours needed to compile the information.

By demanding detailed and specific replies in refusals, an aggrieved person has the legal target for the appeal process, which simplifies matters down to a practical level.

If there is a refusal, or if some of the information is “blacked out” like you see in some FBI documents made public in the USA, and the asker is dissatisfied, then there is a right of appeal first to the Zimbabwe Media Commission, which is also being reformed to be truly independent, and then to the High Court.

And once in the High Court it can wind its way up the judicial ladder under court rules.

Practically, this means that an information officer wanting to withhold anything needs to realise that the reasons had better be so good that a judge, looking at them a couple of months later and in the light of some strong legal arguments, will agree that they are “fair, reasonable, necessary and justifiable in a democratic society based on openness, justice, human dignity, equality and freedom”.

That is a strong test that can overcome executive privilege. This new Act thus goes far beyond just a repeal of AIPPA, one sentence in the new law, but establishes just how our constitutional rights can be enforced quickly, simply and, importantly, at the lowest possible cost, so they are practical rights.

It is a whole sea change from the colonial era and from the murky depths that underlay too much of the First Republic.