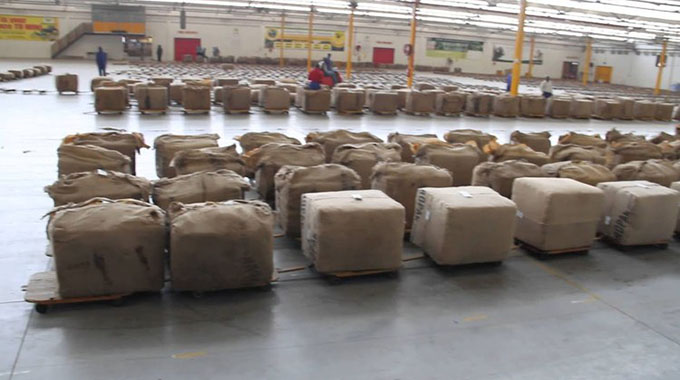 The tobacco selling season was initially scheduled to kick off in mid-March, but was postponed to last Monday. But that, too, was put off because of the two-week extension to the lockdown.

A new date for the start of the marketing season will be announced.

A consistent outcry from tobacco growers has been the prohibitive cost of transport. Therefore, decentralisation of the auction floors for the growers, means a reduction in the cost of transporting the golden leaf to the market.

The cost of transporting the crop to Harare, for example, from the main growing regions in Mashonaland Central, East and West provinces has been one of the factors behind the migration of growers from tobacco to other crops.

One of the positive outcomes of decentralisation will be de-congestion of the auction floors.

In fact, it is a miracle that despite the outbreaks of cholera and typhoid, the tobacco auction floors have not been sites of diseases.

The advent of the global pandemic — Covid-19 — makes it imperative to decentralise and de-congest the auction floors.

Zimbabwe is far from being out of the woods and it is precisely for this reason that the Government extended the nationwide lockdown by a further two weeks to May 3, 2020.

Decentralisation under the circumstances seeks primarily to achieve two objectives. The first is to safeguard the health and lives of people by ensuring that everything possible is done to minimise gatherings where there is risk of exposure to and contracting the virus.

The second is about protecting the production of the country’s major source of foreign currency earnings — tobacco.

While decentralisation is being implemented, farmer organisations must assist in the smooth process of transporting their crop to the auction floors by educating members on booking requirements prior to delivery to the floors.

Farmer organisations need to take a leaf from the Commercial Farmers’ Union (CFU), which created associations at district level designed to strengthen the capacity of their members so they could expand and improve their production.

In this regard, all farmer organisations need to ensure greater involvement of agricultural extension officers in their districts so that they register improved quality crop.

Twenty years after the historic Land Reform Programme, booking deliveries to the auction floors should be standard practice.

In recent years there has been the emergence of private transporters, thinking outside the box and offering services for uplifting the tobacco crop from the farm to the auction floors.

Farmer organisations need to embrace these initiatives because not only do they de-congest traffic at the auction floors, they take off a huge burden from the growers.

In due course, there should be a situation where the grower does not necessarily require to visit the auction floor to see how his/her crop is being sold.

There are precedents in the marketing of cotton and sugar cane.

On the other hand, banks need to be alive to the criticality of disbursing farmers’ earnings timeously thus enabling growers to meet/service their obligations expeditiously.

The payment procedures for tobacco growers this year will be on the basis of 50 percent foreign currency with the balance in local currency on the prevailing interbank rate.

Last year the payment process became a bone of contention with growers dissatisfied with prices as well as the disconnect between the announced foreign currency component due to growers and what they eventually ended up getting.

There were also delays in paying farmers, all adding up to demotivating and in extreme cases, migration of producers to other crops.

Tobacco production has been one of the success stories in empowering previously economically excluded populations from participating in this economic activity. Towns such as Mvurwi and Rusape continue to register growth on the back of tobacco production.

Growing tobacco has transformed lives of many people and it is evidence of changed lifestyles of growers that saw the annual crop production recovering rapidly from the setback that the sector experienced soon after the implementation of the Land Reform Programme.

While emphasis is on decentralisation, all players should be making efforts designed to ensure that growers will be able to go back to the land and increase their hectarage during the 2020-2021 season. This is especially important because a contented grower will deliver a better crop and a quality crop will fetch higher prices for the trader and the grower.