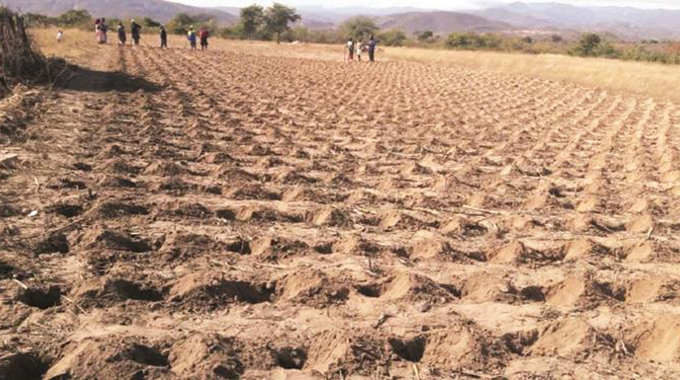 Most fields prepared under the Pfumvudza concept across the country now have planting holes, with the farmers just waiting for the first rains to start planting

The distribution of farming inputs under the Climate-Proofed Presidential Inputs Programme, commonly known as Pfumvudza, is now in full swing countrywide, ensuring that farmers will earn a profit from their labour this year and Zimbabwe will grow enough food.

Since the conception of the Pfumvudza programme, President Mnangagwa and his two deputies have been on the frontline of preparation as the Government shows highest commitment to the attainment of a prosperous farming community and national food security.

The fact that most farmers have already received their inputs before the rainy season, is equally good news and speaks to the seriousness and determination the Government is prepared to go to ensure farmers are ready to start planting as soon as the experts say enough rain has fallen and the country is food-secure.

Also important is that agriculture extension services have been revamped, wheeled, retooled and re-kitted to support farmers.

To this end, the Government should be lauded for doing extremely well to ensure land preparation, training and availability of inputs before the rainy season.

The Government is doing its bit and, because the farmers only get inputs when they have shown they are serious by undergoing the new training and then applying it in the initial preparations, we are not going to have wasted inputs or inputs siphoned off into the black market.

The inputs are going to farmers who are ready and able to use them, and with the revamped Agritex, with officers now on motorbikes, problems and odd deficiencies can be speedily addressed with the majority just getting the good advice they need, when they need it.

Pfumvudza promotes conservation farming techniques and involves use of small plots on smallholder farms and applying the correct agronomic practices for higher returns.

Previous agricultural initiatives failed to yield good results because the inputs were distributed during the course of the rainy season, splitting the farmer’s time, attention and effort between field work and collection of inputs and often arriving too late to take advantage of the whole season’s rainfall.

The Pfumvudza programme aims to go to greater lengths in boosting household food security and income so ensuring that Zimbabwean farmers move from subsistence towards prosperity.

This is indeed in line with Vision 2030, which is difficult to achieve without national food security and without having those hundreds of thousands of small-scale farmers moving up the ladder into income earning households, creating and sharing national economic growth.

Middle-income status does not just mean a richer country. It also means that everyone moves forward so that all families, as well as the entire nation, are middle income.

Through Pfumvudza and the Command Agriculture programme, President Mnangagwa is confident that Zimbabwe will bid farewell to food imports in two years’ time, especially considering that the country expects normal to above normal rains this season.

The Grain Marketing Board is currently spearheading the distribution programme across the country and so far so good, according to reports from the provinces.

With a prediction of good rains expected mid next month, it must be all systems go, if the distribution of the inputs continues at this good and professional pace.

It is our belief, however, that the Government should monitor closely the whole process from planting to crop management, harvesting and post harvesting handling of the yields.

All these stages are critical for family and hence food security.

The good thing about Pfumvudza is the concentrated space and ease at which the plots can be managed given that they are mostly closer to homesteads and not far off in the fields.

Most farmers, have in the past failed to manage their crops due to the distances involved between home and fields.

Many farmers have in the past failed to do any meaning harvest because they plant too big plots against the availability of sufficient inputs.

When followed to its essence, the Pfumvudza project emphasises on high yields on smaller plots and even the inputs being distributed are enough for the marked plots.

Gone are the days when farmers spend precious time and energy on bigger plots when they do not have corresponding manpower, machinery, expertise and inputs.

The Government needs to support of all and sundry on this project and farmers will be their own enemies if they fail this project when everything has been made available to them.