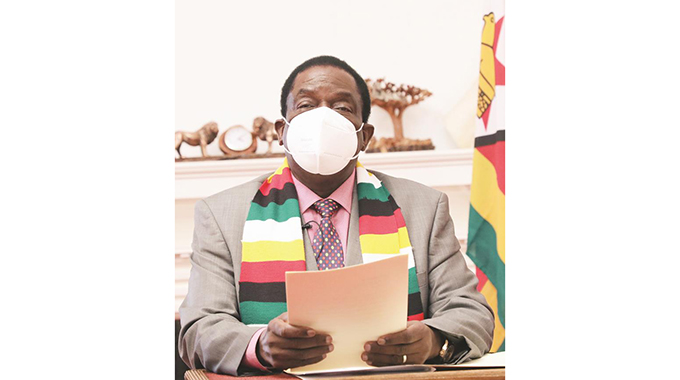 The achievements of Zimbabweans over the last two months of the level-four lockdown have allowed Government to move swiftly on the two measures that the country needs: the immediate re-opening of the economy and the preparations for the imminent re-opening of schools, colleges and universities although that date has not been set yet.

But, announcing these relaxations of the lockdown yesterday, along with the curfew adjustment to 10pm to 5.30am and some intercity travel, President Mnangagwa made it clear that full precautions must continue and that while the vital areas of national life would reopen, the luxuries of socialising would be restricted.

Everyone has to continue wearing masks in public and at work, keeping their hands clean, maintaining social distancing and having temperature scans, businesses re-opening, and this includes the informal sector whose closure caused so much hardship, have to follow fully the protocols set by the World Health Organisation, and this includes the disinfection of premises and avoiding crowding.

Enforcement of the personal and business measures continues, although people will no longer need permission letters to pass roadblocks.

Businesses or markets that fail to follow the rules will be closed, and those flouting the personal rules will be fined. But in any case, it is in our best interests, regardless of enforcement measures, to heed the advice of our medical experts.

The last couple of months have seen high levels of voluntary adherence to the guidelines and rules, with people following them far away from any police officer simply because they did not want to get sick, infect others or die.

We need to continue that level of urgency and self-interest. This continuation of WHO guidelines is vital.

We can all remember how the complacency and general ignoring of personal measures towards the end of last year triggered off the second wave that we have largely beaten back, and we do not need a repeat of what we have had to endure for two months, round about 1 000 extra deaths, the bulk of our fatalities, and thousands of infections along with the economic hardships.

It has been a hard two months, and while the Government had little option to re-impose a level-four lockdown, and then continue it through a pair of fortnight extensions because the infection and death rates were not yet low enough, no one desired this, and we certainly do not want to go through it again because there are people who reckon they know more than the medical experts and no longer need to tale precautions.

Quite sensibly the President was not in a tearing hurry to re-open social life very much. We can live without big parties and socialising over a few drinks.

So social gatherings are limited to 50, enough to get married or go through church services in batches, but not enough to trigger outbreaks, especially as we will be in masks at these gatherings and standing far apart.

The continued ban on bars and nightclubs, sitting in restaurants and big parties, although restaurants can re-open for takeaways and deliveries, seems essential and does not cause much hardship.

It was far more important that we can all go back to work and that our children can soon go back to school than we have fun with friends.

At the same time the vaccination programme is accelerating. Besides the 200 000 Sinopharm doses already in Zimbabwe, with our first commercial order of 600 000 and the second gift of 200 000 announced last week coming very soon, China is now ready to release another 1,2 million doses of our orders. To this can be added gifts in the pipeline from India, Russia and Britain.

It now looks that we have assured supplies for the first two phases of our national programme: the frontline workers, elderly and those with chronic complaints in the first phase and lecturers, teachers and others at medium risk in the second phase.

The fact that medical aid societies and businesses are now cleared for importing through Government whatever additional doses they can track down, so long as these are administered without charge, should help accelerate the programme further.

But we have a long way to go before we have 10 million people vaccinated, and this is the bare minimum for herd immunity, and so we have to redouble our personal efforts.

We know these can work, since we defeated the first wave and beat back the second wave by our efforts.

By keeping all the basic precautions in place we can avoid a third wave and just carry on until the vaccination rates are so high that further relaxation is possible.

Now that the Government, after listening to its medical advisors, has found it possible to re-open most of the economy and to prepare for the re-opening of schools as soon as possible, we would be rash to relax our guard any further until the all clear is sounded.

We showed over the last two months that we could work together, largely in unity, to beat back the second wave, far more severe than the original wave, and so we should be able to keep working together to keep infection rates low while we all line up as our groups are called in for vaccination, so that eventually we can return to normal lives.