Editorial Comment: Nehanda statue: We make our own history 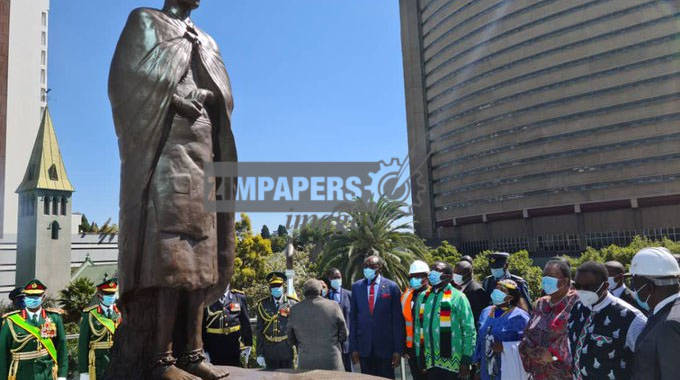 The commissioning of the statue of Mbuya Nehanda at one of the busiest intersections in Harare yesterday should be marking the start of the process of how we interpret our past and how we honour those whose example we wish to follow.

We cannot ignore or rewrite our history, although we can pervert it as the colonial authorities did, but we can highlight achievements and we can honour those whose lives made a difference, then or in future generations.

The legacy of Mbuya Nehanda is a good example.

A custodian of many traditions, she inspired her contemporaries.

You do not just give up; you do not go down without a fight; you do not accept evil deeds. The battles that followed

Because the people of Zimbabwe went down fighting, instead of just quietly surrendering, they could rise again.

And when the circumstances were right they did rise again, and the inspiration that Mbuya Nehanda gave the First Chimurenga was also the inspiration for the Second Chimurenga. So in the end what she represented, what she inspired, succeeded.

Nehanda’s heroism became a significant source of inspiration in the liberation struggle of the 1960s and 1970s.

In independent Zimbabwe, the maternity section of Parirenyatwa Hospital in Harare is named after her. The College of Health Sciences of the University of Zimbabwe is located there as well.

She was a spirit medium, and that gave her the authority to take a leading role.

There were many who worked with her and many who followed her.

But the statue is honouring a woman who took personal responsibility and assumed leadership as a person who knew what had to be done.

So it was right that we have been honouring her, because what she stood for, and what she inspired others to stand for, is how we would all like to see exemplified by our country of Zimbabwe.

She exemplifies that long struggle against colonial rule, from the beginning to the end. Because of her, and people like her, no one forgot that Zimbabweans had once been free and could be free again.

Around the world, there is now growing debate on who should be publicly honoured with statues and monuments and who should not.

Zimbabwe, at independence, had little doubt about what should not be honoured and a handful of statues, including two of Cecil Rhodes, were taken down and despatched to museums, where they belonged as an illustration of very sad periods in our history.

But a couple of the old statues did survive, although in subdued public places, not so much because they were heroes of Zimbabwe but because they had done far more good than harm and would in time be just a small part of our own public monuments.

So we now need to be thinking about those who wish to honour, those who we want future generations to think about and be inspired by.

And this needs a degree of consensus and some care that the decisions are national, rather than political.

This was obviously the case with the statue of Mbuya Nehanda.

The Government might have nominated her, but not only did no one object, but almost everyone thought she was a good choice.

For sometimes mistakes are made if politics is followed.

We are now seeing in the United States a growing majority consensus that the statues of Confederate generals and other monuments exulting the rebellion of those who wanted the continuation of slavery should not be in honoured public positions, as they are not worthy of that honour.

In the end, most will end up in museums or quiet private places.

In Britain there are statues of philanthropists, a few famous but many now almost forgotten, that when present generations delve into history were found to have used fortunes based on slave trading or slave ownership for their public works.

So although they might have done good with those fortunes, the evil they abetted to create the fortunes means they should not be held up in public honour.

We have already, since we changed our country’s name at independence, been remodelling our physical landscape with name changes, and naming airports, hospitals, schools and other structures after those who wish to honour.

Some of this naming has seen the retirement of colonial names, often honouring people that no one should have wished to honour, and instead drawing on our own history and our own appreciation of whose example we wish to follow.

And this is important. In the colonial era there was an attempt to create a “little England” in Africa, as well as exulting those who had done so much to create that colonial society.

By naturalising what was there we have made it part of ourselves, and we need to remember that the bulk of those who worked to create that were not the colonialists, but the people they hired to do the hard work.

So the achievements are ours.

We now need to continue the process, of creating within our physical landscape all that makes it part of us, part of who we are and part of what we want to be.

It is a long, careful and delicate process, but we are now on that journey and starting to exult in our own history, not other people’s doings, and creating that cultural environment that helps define who are.