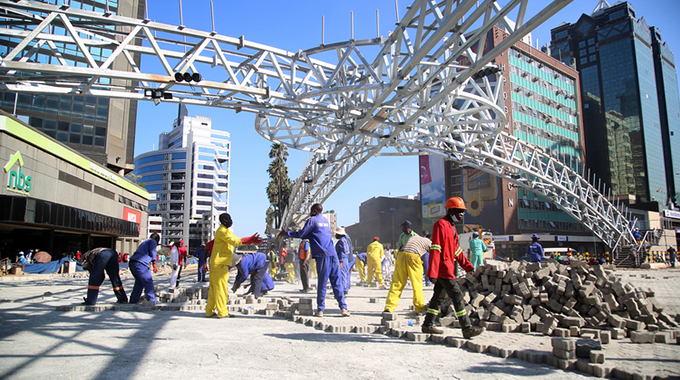 THIS Africa Day, which also happens to be our Culture Week, the Government recognises Mbuya Nehanda (Charwe Nyakasikana), when it unveils the statue of the legendary spirit medium and heroine of Zimbabwe’s struggle against settler colonialism.

The statue is at the intersection of Samora Machel Avenue and Julius Nyerere Way in the capital.

For her defiant stance against the imperialist forces, Mbuya Nehanda was executed on April 28, 1898.

Launching Culture Week at Chief Njelele’s homestead in Gokwe, Midlands Province, President Mnangagwa announced: “On May 25, we are unveiling Mbuya Nehanda’s statue in Harare and we are going to do the same for Gen Khumalo and all the other heroes and heroines of the country.

“Today (Friday) we have Chief Khumalo with us. He is the great, great-grand child of Gen Khumalo. Gen Khumalo was fighting for King Lobengula and they defeated a regiment that was led by Allan Wilson during the Battle of Pupu. We honoured Chief Khumalo’s grandfather posthumously and we are going to have a statue in his honour.”

According to a Zulu proverb, “A man without culture is like a Zebra without stripes.” So too a person without history is formless and has no vision.

Mbuya Nehanda’s statue will straddle at a location central to city dwellers and visitors, a place that is also pregnant with symbolism.

President Mnangagwa told the people in Gokwe that where the statue will be unveiled this Africa Day, “is a church, built on a well that Mbuya Nehanda used to fetch water. Now we have constructed the statue near the church.”

To some people, this might look like the Church and State at loggerheads, but it is not. Apart from its spiritual importance, water is life.

The intersecting roads are also named after Africa’s greatest sons of the 20th century — Tanzania and Mozambique’s founding fathers, respectively.

Africa’s history would be incomplete without the mention of President Julius Nyerere, and Mozambique’s President Samora Moises Machel both of whom sacrificed their countries’ resources for the liberation of Zimbabwe and other Southern African Development Community countries like South Africa, Namibia and Angola.

Mwalimu Nyerere is not only Tanzania’s founding president, but he is also one of the Heads of State and Government who founded the Organisation of African Unity, now the African Union in 1963. Thus, this is a grand showcase of regional peace and integration through artistic form.

There are also a number of landmark buildings leading to the memorial structure, depending on the direction one is coming from. These include Munhumutapa Building (the seat of Government); the High Court; the TelOne building; Reserve Bank of Zimbabwe; NSSA building; National Gallery of Zimbabwe; Monomotapa Crowne Plaza Hotel; National Building Society; Joina City, etc.

The statue occupies a strategic location. When one considers that Mbuya Nehanda was born and raised in Mashonaland Central Province that has the richest agricultural soil, and has the abundant mineral resources, especially gold, divine intervention must uplift Zimbabwe’s economic standing.

The intersection is also a display of innovative links and nodes that sum up the cultural, political, economic, historical, language and gender dynamics, not only of Zimbabwe, but the whole continent.

This interlinkage, speaks into the 2021 Africa Day theme: “Arts, Culture and Heritage: Levers for Building the Africa We Want.”

As Zimbabwe celebrates the recognition of its gallant sons and daughters this Africa Day, it is unfortunate that there are some dissenting voices. The armchair critics have said so much, but isn’t it interesting that the Covid-19 pandemic has exposed the double standards we apply regarding things Zimbabwean, disregarding the damage they cause to our identity?

Among some of the home remedies that people are taking as prevention against Covid-19 are natural herbs, some of which are normally dispensed by traditional healers-cum-spirit mediums.

One of them is Zumbani, which is now described as a wonder herb. Christians and non-Christians alike are taking it because life is precious.

“The Black skin is not a badge of shame, but rather a glorious symbol of national greatness” civil rights activist Marcus Garvey cautioned; while South African musician Hugh Masekela also said, “I’ve got to where I am in life not because of something I brought to the world, but through something I found — the wealth of African culture.”

African culture is so deep and rich in meaning; a culture that can turn the fortunes of this continent for better. Anything “woke” must not only be seen through Western lenses. As a people, Africa is capable of creating its own conversations.

If Mbuya Nehanda was not a towering figure in Zimbabwe and Africa’s history — past, present and future, why has so much research been carried out on every aspect of her life, especially her boldness to face off the colonisers?

Why were the people who dispossessed us of our land and other natural resources interested in wanting to know more about the heroes of the First Chimurenga, while some of us want to shun it?

EE Burke writing in a well-researched journal article “Mazoe and the MaShona Rebellion, 1896-97”, published in 1971 says: “The relationships in 1896 between the spirit mediums Kagubi (Kaguvi) and Nyanda (Nehanda), were interwoven with all the intricacies of Shona religious beliefs, and it is doubtful whether the relationships are as yet fully comprehended . . .”

He adds that “according to some accounts, Mkwati, the chief representative of the Mwari cult and the organiser of the Matabele rebellion, sent messages, in April 1896, to Mashayamombe, at his kraal near Hartley (Chegutu), offering the Matabele assistance if an insurrection could be organised amongst the Shona.”

Not only does this speak of an advanced intelligence and communication system among our people during the First Chimurenga, but it also shows that the ethnic groups in the country lived in harmony, and were united against the invading enemy forces, led by Cecil John Rhodes, whose relics are all over the country, but no one sees anything wrong about their spiritual implications on Zimbabwe.

So, if we ensure that the final resting places of our relatives have careful markers, including artistic impressions such as the deceased’s facial appearance, why not do the same for the country’s heroes and heroines?

Why claim that the Second Republic is worshipping the dead, when we have statues of our colonisers all over the country and, when some of us have done the same for our great grandparents, grandparents, parents, brothers and sisters?

Life and death are full of mysteries, sometimes difficult to unravel, especially when dealing with the life of a spirit medium, famed for fighting in the First Chimurenga, and making a prophetic pronouncement — “Mapfupa angu achamuka” (My bones will rise again”) — that many believe has come to pass, following the successful execution of the Second Chimurenga. Even in statue form, the iconic spirit medium and war strategist Mbuya Nehanda, continues to be a major talking point.