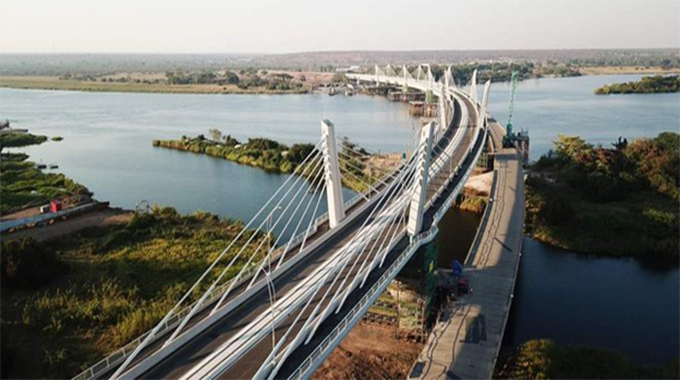 The commissioning of the new Kazungula Bridge across the Zambezi yesterday by the Presidents of Zambia, Botswana, Zimbabwe, Mozambique and DRC is important for all for the SADC region in that it creates a second major north-south corridor across the region, vital in the growth of trade as everyone puts development on the top of the agenda, and also opening new investment opportunities, especially in tourism.

It also cements Zimbabwe’s return under the Second Republic to becoming a fully participating partner in regional planning and development, prepared to pay its share of the bills and be a good neighbour, rather than riding on the back of other countries’ efforts.

The bridge started as a joint project by Botswana and Zambia in 2007. The two countries arranged the finance, a whopping US$259,3 million, and then arranged contractors and put in the required work on each side to ensure their road networks would be able to handle the extra traffic from the bridge.

Zimbabwe was a latecomer for reasons that we are all aware of. But at the start of the Second Republic President Mnangagwa wanted to put the past aside and offered to buy into the project. We were not looking for a free ride with our two neighbours paying the bills while we just connected to the north-south highway.

Zambia and Botswana were also willing to let bygones be bygones, and we need to remember that the bridge is more expensive than it needed to have been since it has to curve to avoid crossing Zimbabwean territory at that point where four countries almost touch. So it did need a concession by those two states to let Zimbabwe buy in.

But now, when payments fall due on the loans taken out to build the bridge, Zimbabwe will chip in with its share.

In order to get full benefit from its investment, Zimbabwe has also put the required upgrade of the highway between Kasane in Botswana and Victoria Falls at the top of its priority list.

Namibia, the fourth country that touches the Kazungula corridor, and the third one on the southern side of the Zambezi, is already connected to the corridor through its joint investment with Zambia for the Katima Mulilo Bridge upstream.

One of the first, and almost immediate, benefits will be to the tourism industry. Already many tourists coming into the area visit all three countries and the tripling of attractions produces an even bigger draw for the benefit of us all.

Now it will be possible for a rather interesting road journey: Victoria Falls to Chobe in Botswana, then across the new bridge and along the northern bank of the Zambezi back to Livingstone. Obviously there will be stop overs and no tourist will want to break the speed record, but such a journey, in stages, will give tourists an opportunity to travel through prime game areas on both banks of the river, and see a decent stretch of one of the world’s most famous rivers. This will be more exciting than travelling by air.

Presumably smart tourism operators in all three countries, and perhaps Namibia, are already thinking about the sort of luxury coaches they will need to make this trip a really worthwhile part of everyone’s holiday.

Botswana and Zambia are also planning a new north-south railway, the Mosetse-Kazungula-Livingstone line, largely to give SADC a second north-south railway corridor, again something that will be required as trade and traffic grow. The old colonial railway system designed by Cecil Rhodes will simply not be good enough, and in any case a link through Botswana will be significantly shorter and so cheaper for access to Atlantic ports and the southern ports of South Africa.

Zimbabwe needs to at least plan on how to connect to this proposed line at some point south of Kazungula, not to divert north-south traffic to Beitbridge, but to give Zimbabwean businesses a northern access point to Botswana and a more modern link to western Zambia than the old Victoria Falls Bridge.

For these reasons, and because of altitudes and gradients, it would probably make better sense to connect from Dete or Hwange, rather than have trains climbing down the escarpment to the Falls and then back up along the river, especially as Zambia Railways will have the northern bank line handling that route.

That route in turn will start making more sections of the Okavango-Zambezi transfrontier conservation park far more accessible. We need to remember that most Asians and Europeans see train travel as normal and preferable to road buses. So it is fairly easy to imagine a luxury train, with all carriages being a sort of combination dining car and observation car, travelling through north-west Zimbabwe, north-east Botswana, over the bridge, across south-west Zambia and then back over the Falls bridge. The new bridge includes space for a railway line.

We do not have to start working on this connection now, but it would make sense when the railway engineers from Botswana and Zambia start working on how to connect the proposed long section of new line in Botswana to the short proposed section in Zambia, that Zimbabwean engineers are involved in working out an acceptable and good connecting route and where in Botswana a suitable junction point could be created.

A good chunk of the Botswana route runs through forest reserves and national park, and any Zimbabwean connection would also run through national park, safari areas and forests. One problem of concentrating so much tourism around the Victoria Falls and Chobe is that there are limits to how many people can be in those areas at any one time if the natural beauty is to be preserved. Spreading the human traffic means more tourists can be accommodated without overcrowding.

So the new bridge is not only important for immediate trade network needs, but will open up many opportunities for those investing in neglected areas of the three countries. It seems a really good investment for Zimbabwe to have bought into the project and become a full partner.

Given the fact that the bridge will connect Botswana, Zambia, Malawi, the DRC, Mozambique, Tanzania, South Africa and Zimbabwe, it is without doubt that it will boost regional economies through increased traffic throughout the North-South Corridor, increase global competitiveness of goods as a function of reduced time-based trade and transport costs and will in turn limit the transit time from three days to less than half a day.

Newer Post
Journalism has always been cornerstone of activism, and Zimbabwe regime’s attempts to curtail this is a sign of cowardice and fascism
Older Post
RG’s office ‘shields’ corruption accused officer