EDITORIAL COMMENT : Rains welcome, but be wary of hazards 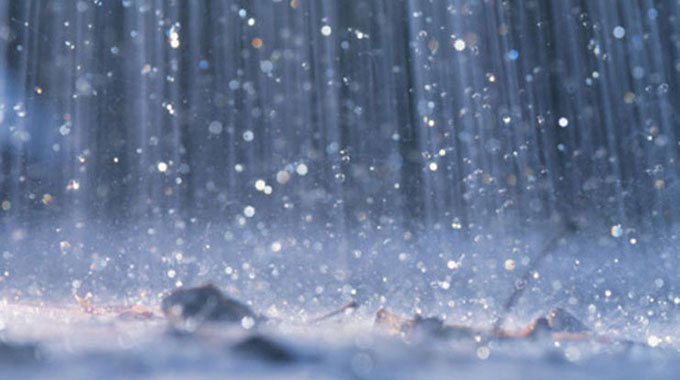 We all love the sound of rain, the smell of the earth that erupts, the flourishing green trees and lawns and, above all, the air of expectation for an enhanced life that grips everyone.

While there are a lot of benefits to humanity brought by rain, we have to always bear in mind that the rainy season can bring with it a host of trouble.

It can lead to death or permanent injury, while there are other problems that linger well after the spell is gone.

As the rains started falling this week, with meteorologists predicting more as the season is expected to receive normal-to-above normal rains, it is prudent that people are aware of the dangers that lurk.

Precautions should be taken as heavy rains can cause widespread weather hazards resulting in heavy damage to both humans and the environment.

Motorists have in the past fallen victim of the rainy weather after failing to prepare their vehicles in advance of the rainy season. In some cases, some find at the last minute that their wipers are not working properly, that their tyres cannot provide good traction and their brakes no longer have a tight grip.

These are some of the areas vehicles owners should be pre-occupied with so that when the rains increase they do not find themselves being involved in mishaps.

Vehicle owners should be aware that rains impede visibility, especially during the night, or when it gets darker due to heavy cloud cover, so they must always ensure that their headlights are in excellent condition.

Speeding is always dangerous, but it becomes more lethal when the weather conditions are not favourable and this has resulted in some motorists veering off the road unexpectedly.

Slowing down to the minimum speed or pulling off the road in heavy rains will always save a life.

For those on the highway, one of the important safety precautions is to drive a safe distance from heavy vehicles which can splash so much water with the potential to totally impair the driver’s visibility.

The other important tip is for drivers not to attempt crossing flooded rivers, despite how shallow the water might appear.

In the past, we have witnessed many deaths as lorries and buses were swept away after drivers tried to drive through flooded bridges after underestimating the strength of the water current.

Flooding in general, is another problem that the rainy season is likely to bring, and this calls for people to be extra careful and take precautionary measures before disaster strike.

One of the easiest ways to avoid getting in problem is to always listen to the radio to have knowledge of what is brewing.

In the event of a pending flood, people should quickly move to high ground and stay there until it is safe to return to their homes.

We have already seen some areas in Chipinge district where houses and schools were damaged last week after rains that were accompanied by a storm hit the area.

This should be expected as we go forward because the rainy seasons are no longer predictable due to the effects of climate change.

In some cases, the result of such storms is the falling of electricity poles, and this means people must not be inquisitive by touching electric lines.

The Civil Protection Unit should be carrying out awareness campaigns in such areas, so that people can treat all electric wires as live at all times.

Staying away from flooded areas can also help avoid electric shocks since water is a great conductor of electricity, especially if it comes in contact with electricity lines.

Lightning is another deadly occurrence associated with thunderstorms, thus people should always be aware that lightning bolts can strike even when it seems safe.

Never seek shelter under trees and do not stand where you are the tallest object since this exposes one to being struck by lightning bolts. The safest place to be is in a well-constructed building, or a metal cage, like a car.

Switching off all electric gadgets in the home is another precaution one can take to avoid damage by lightning.

During the rainy season, there is need to escalate measures to prevent bites from mosquitoes, since it is their breeding season.

The rains will create stagnant pools of water where mosquitoes lay their eggs.

But keeping mosquitoes away and wearing clothes that cover the body, as well as using mosquito repellents could be the perfect way to combat malaria that is caused by bites.

Diseases like cholera are also likely to crop up during the rainy season because the bacteria that causes the disease thrives in dirty or contaminated water whose presence will be facilitated by the rainy season.

The rainy season can also be devastating to farmers as the rains can easily destroy crops, affecting harvests.

The rains also encourage the breeding of bacteria and fungus that affect crop production, so farmers should always be prepared for such encounters.

Hazards associated with the rainy season call for responsible authorities to do more in educating the people on how they can avoid getting into problems when it rains. Of course, the rains are badly needed, especially after the country went through droughts in the past few seasons, but it should be always registered in the minds of the people that they can also bring misery.

People should stop relying only on entities like the CPU in times of disaster. Individuals and communities have a responsibility to take necessary precaution to avert possible loss of lives and destruction of property.

It cannot be overemphasised that the season we have entered into requires one to be vigilant and be on the lookout for the likelihood of natural disasters.