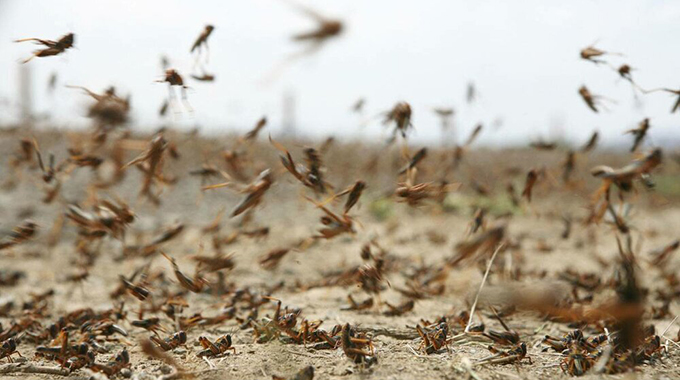 East African countries have been hit hard by a desert locust infestation in decades, threatening crops, food security and the livelihoods of millions of people in the region.

Most of the affected countries have seen their national response capacities over-stretched.

All this should give Zimbabwe and its neighbours within SADC useful insight into the complexities of managing locust outbreaks.

Diseases and pests know no boundaries and the locust outbreaks that ravaged East Africa could happen in this region if we don’t take such threats seriously.

It is clear that without urgent regional and international cooperative action at all levels, our region won’t be able to contain the locust outbreaks effectively.

The Covid-19 pandemic is over-stretching national budgets and if there is going to be a massive locust outbreak, most countries in the region will find it difficult to control the large swarms of the voracious pests.

It is quite heartening to learn that the UN Food and Agriculture Organisation recently launched the Southern Africa Emergency Locust Response and Preparedness Project which is funded by FAO’s Technical Cooperation Programme.

The project will increase the emergency capacity of SADC and International Red Locust Control Organisation for Central and Southern Africa (IRLCO-CSA) to support the four affected member states namely Zimbabwe, Botswana, Namibia and Zambia in their bid to prevent the pest from causing more damage.

This US$500 000 project will focus on emergency response in the locust hotspots and strengthen coordination and information exchange among the affected countries.

This programme allows FAO to draw from its own regular programme resources to respond to countries’ most pressing needs for technical assistance.

Furthermore, it is important to state that around seven million people in the four affected countries who are still recovering from the impact of the 2019 drought and grappling with the economic impact of Covid-19 pandemic, could experience further food and nutrition insecurity, if there is no effective preventative measures to control the locusts.

Locust outbreaks should not be taken.

The outbreaks of the African migratory locust are different from the desert locust emergency in eastern Africa, but their destructive potential is similar.

Experts say locusts are among the most destructive pests in the world.

One swarm can contain tens of millions of adults and there are already multiple swarms in southern Africa.

A single swarm can eat as much in one day as 2 500 people, demolishing crops and livestock pasture in a matter of hours.

Normal to above normal rains have been predicted for the bulk of the region and wetter conditions offer a conducive environment for the breeding of large swarms.

The insects could pose a severe risk if SADC does not unite and coordinate efforts to control the pests, as it has done in the past when it met and defeated the menace, which is why IRLCO-CSA is there and still exists.

Governments in the region should be on high alert and activate national response plans to control the locust outbreaks.

The swarms that hit the region decades ago were defeated, as old people remember from their childhood, by aerial attack, killing the hoppers on the ground and the swarms in the air.

An individual farmer can do little, although all farmers must be readied to give the alarm as soon as locust hoppers and swarms appear.

But the necessary systems, including the aircraft, must be on standby so that when an alarm is given action can be swift and complete.

The FAO has led international efforts to fight locusts across Africa and the Middle East for over 50 years, acting as a link between donors and the affected countries.

Our own organisations have the institutional memory of what works, and what does not, and can ensure that resources and aid are channelled into the correct response.

Given this, it is important for SADC to build strong relations and cooperate with the FAO prevent locusts from demolishing large swathes of the southern African region in this coming cropping season.

Experiences and best practices from other regions should be studied carefully and implemented to help control locust outbreaks.

Resource mobilisation is key and SADC should start engaging donors ranging from the United States, China to the European Union to raise funds in preparation of a worst-case scenario.

Donors should be alive to our possible needs as a region ahead of time.

If nothing is done on time, our governments struggling over Covid-19 preparedness will further get a heavy bashing for doing too little too late to tackle the locust outbreaks which would have escalated.

Zimbabwe and the region should be properly geared up to deal with the locust outbreaks. We have beaten the pest before. We can do it again.