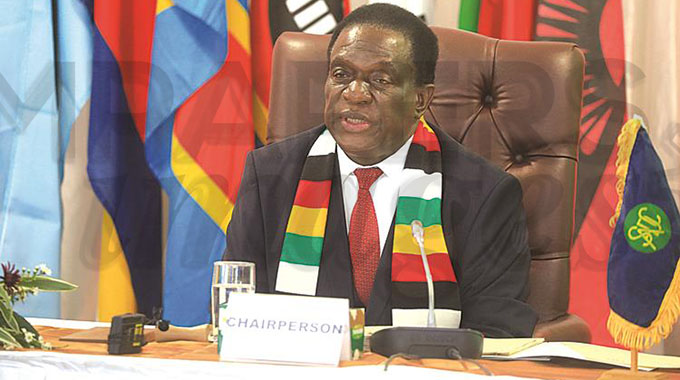 Prospects of Zimbabwe becoming food self-sufficient within the next  three years as stated by President Mnangagwa on Friday, bring good news to a country that has been ravaged by successive droughts and Cyclone Idai, compromising its ability to adequately feed its people.

These funds can be redirected to other critical needs once the country begins to produce enough.

It is about time this country stops searching for food elsewhere, but should be the one exporting to those in need, regaining its breadbasket status in southern Africa.

Zimbabwe has been buying maize and wheat from countries it used to export to, but we are confident this state of affairs is about to change.

The energy expended in putting in place proper strategies to increase production should yield results over the next few months and years.

The capacity is undoubted and the ingredients for increased production levels are there on the ground, hence there is no excuse for poor performance going forward.

The President’s confidence that the complexion of agriculture will change within the next three years is based on what he is seeing on the ground.

We have every reason to believe him and the onus is on all stakeholders to work towards achieving this.

This summer cropping season should be telling.

In fact, the President has been consistent in his desire for Zimbabwe to grow enough to feed its people.

He said as much at his inauguration speech on November 24, 2017 as he emphasised that this country had the stamina for self-sufficiency.

“Therefore, I exhort beneficiaries of the Land Reform Programme to show their deservedness by demonstrating commitment to the utilisation of the land now available to them for national food security and for the recovery of our economy.

“They must take advantage of programmes that my Government shall continue to avail to ensure that all land is utilised optimally.

“To that end, my Government will capacitate the Land Commission so that the commission is seized with all outstanding issues related to land redistribution,” he said.

The Land Audit Committee has made recommendations to reduce farm sizes in some instances and ensure the finite resource is put to maximum use.

We applaud the Agriculture Recovery Plan which we believe is a solid foundation on which the agricultural sector will anchor.

It is one that should effectively reverse the negative production trends registered over the past few decades and ensure attainment of self-sufficiency.

Furthermore, the Pfumvudza programme under which Government targets that rural areas produce 1,8 million tonnes of cereals and 360 000  oil seeds in the 2020-21 is one strategy that should significantly feed into total output.

On its part the farm mechanisation programme launched a few months ago, should be a game-changer.

Provision of such implements as tractors, combine harvesters, planters and disc harrows, among other machinery is expected to boost production levels and hence facilitate self-sufficiency.

The new Minister of Lands, Agriculture, Water and Rural Settlement Anxious Masuka has the experience to effectively superintend over the anticipated transformation of this sector.

Agriculture contributes 20 percent to the Gross Domestic Product and employs 33 percent of the country’s labour force.

It feeds at least 20 percent of its produce into the manufacturing sector.

Such a central role demands that the sector performs well, hence the economy.

Time for Zimbabwe to stand up and claim its rightful place in the region and on the continent at large is now.

We need to tie any loose-ends as the summer cropping season beckons. More irrigation facilities will be critical to offset effects of climate change.

Furthermore, Government should not hesitate to take away land from those that are not fully utilising it. It must be given to serious farmers intent on contributing effectively to the national breadbasket.

Recommendations by the Land Audit Committee must be implemented expeditiously in this regard.