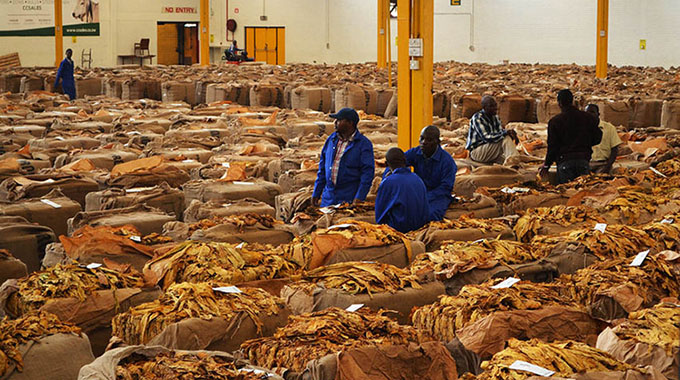 Side-marketing has been the bane of contract farming for some years with middlemen going around buying crops for cash at well under market prices, cheating the farmers, and then selling either directly to final users, even the GMB or another marketing company, or illegally exporting the produce and thus cheating the contractors and the country.

The only people who are enriched by this process are these middlemen and their profits come out of the money that should be going to the growers and those who financed the growers. At the same time they damage the whole agricultural finance system, in that the companies that put up money to provide inputs to farmers do not get paid back when the harvest comes in.

Maize is already a controlled crop, with in any case almost the entire harvest grown from inputs provided through the Grain Marketing Board through the Presidential Inputs Scheme and Command Agriculture and funded by the Government or the commercial banks.

Tobacco, with the well-established contract schemes policed by the Tobacco Industry and Marketing Board providing most of the crop and the auctions for the self-financed producers, has been largely immune from side-marketing since merchants have agreements, enforced by the TIMB, that they will only buy from their own farmers or on the auction floors. In any case there is no ready market for raw leaf outside the system.

There were worrying reports that middlemen were trying to buy tobacco from farmers under contract, at well under the contract prices, and were presumably trying to make a profit by selling this at auction under a bogus farm delivery although the possibility exists that they were trying to smuggle it out, although there is no international market for raw unprocessed leaf. Farmers who succumb are likely to be black-listed by the contractors, so the system is self-correcting.

Cotton has been badly hit by side-marketing in the past, with even companies prepared to buy direct from farmers under contract to someone else, and farmers selling at the back gate to avoid refunding the cost of their inputs. And now there are dangers that soya beans, either grown under contract from a major cooking oil company or under contract from the GMB, could be hit.

The move at the end of last week by the Ministry of Lands, Agriculture, Fisheries, Water and Rural Resettlement to criminalise side marketing of raw cotton yet to be ginned and or of soya beans was necessary and has come just in time as the harvests start being collected.

The measures gazetted by Lands and Agriculture Minister Dr Anxious Masuka also make it far more difficult for middlemen to sell the crops they buy, since the large local companies that are the eventual buyers are forbidden to buy outside the system, and there are sufficiently few that these can be checked in a quick audit. Closing off the local market for side-marketed crops may in the end be more effective than just a ban on side-marketing.

Potential cheating for exports was blocked, as exports of raw cotton or soya beans now need written permission from the GMB or, with cotton, from an authorised agency. To make sense such exports would have to go by truck through a border post, and that can be monitored effectively. Commercial smuggling by backpack is not a viable option for raw unprocessed crops.

The regulations are careful not to ban exports of processed crops. Once cotton has been ginned the fibre can be exported, and with the dearth of our own textile industries still, most will be exported; but such exports have been monitored for years under Reserve Bank of Zimbabwe rules. Technically cooking oil, the main product from processed soya beans, can also be exported and hopefully one day will be once we grow a surplus. But that is not yet the position so just about everyone will be selling locally and our oil expressers will be happy to buy local soya beans in local currency from their contracted farmers or from the GMB to make as much cooking oil as possible before hitting the foreign currency auctions.

Even self-financed producers of both crops have for all practical purposes can only sell to the authorised buyers of these crops. But in any case such farmers produce these days only a tiny percentage of the harvest, since farmers do need finance and the contract schemes offer a much better deal considering the appalling interest rates demanded by banks making pure unguaranteed commercial loans.

Even transport of soya beans and retention on farms of soya beans is controlled for contract farmers. These farmers are just able to move 100kg or less across districts or keep on their farms. Any quantity can be taken to the nearest delivery point set up by the contractor.

Enforcement will need to be monitored. The authorities, basically the police, can investigate where there are reasonable grounds for suspicion and then can impound both the crops being moved and the vehicles being used until the criminal proceedings are concluded. If there are convictions the crops can be declared forfeit to the State.

This might well mean check points to monitor dubious lorries and regrettably, despite strenuous efforts being made by the Zimbabwe Republic Police to root out corruption, some police still accept bribes.

As the major penalty is a fine of three times the value of the seized crops, using the top local price for the best grades, buyers in side marketing deals are certainly going to be tempted to offer cash if caught,

One way to minimise the problem is to make it crystal clear that offering a bribe is as serious a criminal offence as accepting a bribe. We have tended, in our anti-corruption drives, to hammer those who take illegal payments.

We need to have a few well-publicised arrests, trials and convictions of those who pay or, more precisely offer to pay, since we all now expect the police and other authorities to be more resistant to corruption.

The evils of corruption can be tackled at both ends.

The new regulations already hammer the buyers in side-marketing as well as the sellers. In fact the buyers are more likely to be hit since they will have already paid the cheating farmer before they are caught, although since thieves are notorious for falling out many will not want to suffer alone.

In the end all Minister Masuka wants is everyone to follow the civil contracts they have signed. He has criminalised breaches of those contracts, and made it very difficult for anyone to profit by tempting farmers to breach their contracts, but basically there will be no arrests, no trials, no convictions, no crops forfeited and no illegal exports if everyone is honest.

The Minister has just made honesty pay better than dishonesty.