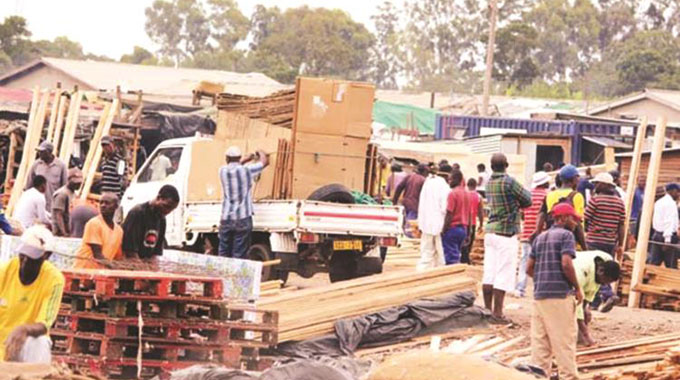 With around three quarters of the economically active population earning a living in the informal sector according to official statistics, the reopening of this swathe of businesses was obviously a priority as lockdown conditions were eased.

But, as President Mnangagwa made it clear last Friday, the reopening of the informal sector is not a return to the total anarchy of March.

The reopening needs to be done in an orderly way and with public health safeguards, otherwise the huge health gains of the lockdown will be totally dissipated and Covid-19 can run amok.

In any case, the formalisation of the informal sector has been a long-term goal of the Government and many others for some years, converting what was seen as a survival strategy into what it should be, the breeding ground of new businesses.

Treating those providing services and goods in the informal sector as a different breed from those opening new formal businesses was always a bit weird and somewhat insulting.

These people are, in fact, businesspeople even if their businesses are small.

So, first of all, the Government wants the informal traders and service people to be registered. The legal procedures have existed for decades.

Local authorities have the facility for licensing hawkers, people who move around selling vegetables and other small items, and vendors, people who sell from a fixed point, often from a table or a booth.

The problem is that very few local authorities have been insisting on this, Bulawayo being the major exception.

Registration at least gives a list with names, ID numbers and addresses, and offers the opportunity for control and regulation, that you cannot just set up shop where you like.

The seizure of pavements by vendors has been a problem for a long time, and hawkers at some suburban shopping centres have driven customers away to better controlled shopping areas, to the detriment of both formal shops and informal traders.

This can be fixed. We have already suggested that flea markets are a more obvious solution with the private sector encouraged to help and cooperate.

We already see this in some areas, and town planners have allowed purpose-built markets to be erected in Harare city centre, and for suitable premises to be converted.

More informally there has been sub-letting, an ordinary shop divided into several counters. Places like Mupedzanhamo have been established by Harare City Council itself.

There are other buildings and premises that could be converted, or proper markets established.

Avondale in Harare is perhaps a prime example of how a suburban shopping centre can be used by everyone in a highly controlled way, with a limited number of hawkers, a flower market for the next stage up and a private flea market giving the upper end of the informal sector controlled premises and security.

This is important when it comes to the other conditions set by the President, the need for public health.

The enforcement of masks is simple, and taps and bathrooms are an obvious condition for the licensing of the market premises.

It would probably be better to figure out market facilities, on a small scale, in every suburban shopping centre rather than have tens of thousands of vendors piling up in a city centre. Again some effort has been made by local authorities in recent weeks as they try and regulate the already-permitted vegetable markets, and this can be extended. At the same time property owners can be encouraged to establish flea markets.

The one major problem from the past, that vendors just start trading wherever they like, can be avoided as we rebuild better by using the registration system, but at the same time we cannot just dump people far from customers.

This is why a sensible planning and regulation of suburban markets could be a partial answer, spreading out the informal traders.

The next stage up from a local authority vendor licence is registration as a small enterprise, where someone who has started off very small can now move into the more formal world, access some working capital and generally start that journey to what was once called a real business.

The Finance and Economic Development Ministry also needs to start being imaginative and creative.

Most in the informal sector do not pay tax.

Obviously with VAT paid by suppliers and the two percent transaction tax there is some revenue, and in some cases there are withholding taxes paid by larger businesses, largely when they hire services rather than buy goods. But a great deal of economic activity operates outside the Zimra umbrella.

Yet presumptive and withholding taxes offer an opportunity to widen the tax base. But it does not make sense to have Zimra spending $1 000 to bring in $500 of taxes, so a simple tax system is required. This is not impossible, and it might even be possible to have a simple tax collected by others.

One example would be those in flea markets, who pay a daily rent, to have a little extra added and the flea-market operator responsible for forwarding this every month. Even $10 a day, multiplied by tens of thousands, would help.

Zimra inspectors would then be checking bulk payment systems, rather than individual traders. At the same time the taxmen could be keeping an eye open on those who they feel might be progressing from the low tax area and making them start keeping better records and submitting returns.

But the quarterly tax payment rules might not be the best way for small businesses.

Something a bit more on the order of a monthly tax return would make more sense.

This needs the Government and the local authorities to be talking, continuously, with those in the informal sector, moving away from a stark choice between anarchy and police raids to a system where the informal sector is seen a real business sector, subject to simple rules and offering the same security as larger concerns.

We have an opportunity to build better

We must grab it for the future development of Zimbabwe. We must grab it now when we need to re-open this sector without Covid-19 infections and deaths.

Covid-19 has already made everyone start thinking, it has changed a lot of attitudes and concepts.

Perhaps we just needed this spur to get our brains into gear and stop thinking that the old ways were best.