EDITORIAL COMMENT: Zim getting it right on vaccine roll-out 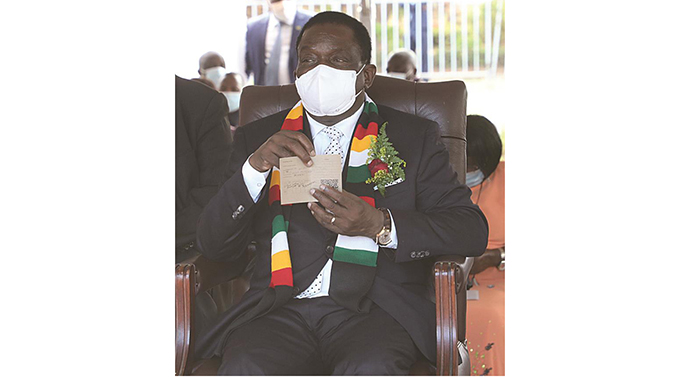 The President displays his vaccination card at Victoria Falls Hospital on Wednesday.

The opening of the second phase of the national vaccination programme in Victoria Falls this week is a clear sign that Zimbabwe is getting it right and that surely and steadily we are moving towards the day when we can hope to eradicate Covid-19 from our country, and keep it eradicated.

As President Mnangagwa noted, 68 percent of those in the first phase, the frontline workers, have already received their first vaccinations and this week the first groups are getting their second shot after the four-week gap in shots.

That figure, plus the arrival of the larger second delivery of vaccinations, allowed the Government to move forward and open the second phase, which sees teachers as the main group, although the fairly small group of Parliamentarians and Ministers have now also been called in, on the same grounds that their duties mean they have to interact with a lot of people and that they cannot isolate themselves.

As a member of this phase two group, President Mnangagwa jumped at his opportunity and stood in line, in front of television cameras. He stood in line because he wants his vaccination, he did it in public to show the way, set an example and show that he listens to health experts rather than read weird messages from ignorant conspiracy theorists on social media platforms.

Political leaders had been careful not to use their clout to jump the vaccination queue, a queue managed by health experts whose advice was used by the Government to set the priorities, the same priorities that almost all countries follow, starting with frontline health workers.

But when their group is called they turn up. Importantly the main opposition leader, Senator Douglas Mwonzora of the MDC-T, accepted the President’s invitation to accompany him, and stood in line and took his shot.

As did those from smaller parties. This is important because a fair block of the social media drivel comes from their supporters.

The President stressed that the programme is run by health experts, and that the ceremony launching the second phase was to show national unity in combating the pandemic.

Senator Mwonzora followed the same line and called for de-politicisation of the national effort to combat Covid-19, including keeping politics out of the vaccination programme.

This is rational. Political parties are neither set up nor staffed to cope to deal with public health emergencies and everyone is reliant on the advice and expertise of the same group of experts within the Ministry of Health and Child Care and the medical schools at universities.

This in fact is how we all live our lives when it comes to our health. No one ever wants to know how their doctor votes: they just want to know if they are good.

Scoring political points from a public health emergency is both stupid and damaging, but anyone, including an opposition politician, with a good idea to make a vaccination programme work better is more than welcome to submit these thoughts.

But ideas should be informed and make sense, not just be stupid or exhibiting dislike of particular countries.

Religious and other community leaders have now been universal in their advice to their followers to stand in line as their groups are called and get their jabs.

The people of Victoria Falls are enthusiastic about their groups reaching the front of the queue. When we talk about the economic damage from Covid-19 tourism is in the top slot.

The restrictions on movement, globally, regionally and nationally have hit Victoria Falls hard. Obviously anything that can make the destination safer will be grabbed, and equally obviously as visitors return tourism staff are the sort of people who deal very closely with large numbers of total strangers and need to be safe.

It is difficult to understand why some people want to make a political issue of the Chinese vaccines. Sinovac and Sinopharm, and Zimbabwe is getting doses from both companies, followed a very safe and very traditional approach to developing their very similar vaccines.

Both companies decided to go for the inactive, or dead vaccine. While the concept is fairly simple, and has been used to develop a wide range of vaccines against other diseases, the technology process and the safety and effectiveness testing took time.

The huge advantage of the inactive vaccines is that they are totally safe, since nothing living and nothing even potentially poisonous is injected into a human.

The one major question is if they work, that is does the injected person develop the desired immunity. As the two vaccines have been rolled out, and the Chinese not only taking the bulk of production themselves, but have been more generous than all other countries in giving others, including Zimbabwe, supplies, the continually improving statistics are showing effectiveness of around 80 percent, which is within the band of all Covid-19 vaccines.

The live viruses use engineered RNA developed from similar viruses, in one case from a chimpanzee virus, but which are not dead. These effectively contain short strips of the Covid-19 code that will generate antibodies for a few of the coronavirus spikes without making the person ill.

But the inactive vaccines allow immunity against all spikes. This is important when you have new varieties.

If the new variety does not have the particular spike your live vaccine was engineered to deal with, it will not work so well. South Africa has been facing this problem with the live vaccine it first chose for the Covid-19 mutation rampant in that country.

But since the dead vaccine deals with all, most are still there despite any changes. So it is more likely to work against varieties that no one can predict before they emerge.

In fact there are only three questions that arise with vaccines: Are they safe? Do they work? Are they available? With Sinovac and Sinopharm we get three yeses, even though availability has required the Chinese President to give a personal instruction to release doses desperately needed in his own country.