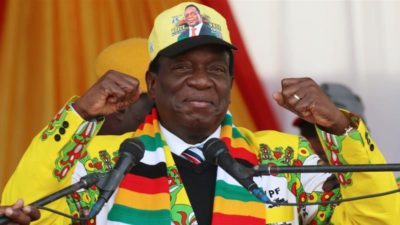 PRESIDENT Emmerson Mnangagwa’s visit to Bulawayo last week and his promise to assist in resolving the water crisis in the city has been described by residents and human rights activists as a political gimmick.

They said if Mnangagwa was sincere, the Zambezi water project would have been long finalised since he has been in government since 1980.

Bulawayo has this year experienced its worst water crisis with residents currently going for six days without running water in their homes while some areas claim to have been without water for more than six months now.

Mnangagwa on Saturday met Bulawayo mayor Solomon Mguni and councillors and promised that the government would soon step in and address biting water shortages in the city.

“The water situation in Bulawayo is dire and there is a direct link between shortage of water in Bulawayo and the government system in Zimbabwe. The major cause of water shortages in Bulawayo is the national government itself. It has not invested in water and stifled the ability of local authorities to operate and harvest water,” she said.

Ibhetshu lika Zulu secretary-general Mbuso Fuzwayo said the government was just “playing politics” but would not resolve the water crisis.

“Bulawayo’s water problem will not be addressed by the leadership that has got a problem of human rights violations and as a side show they come to Bulawayo to distract those who are talking about good governance, poverty and kidnapping,” Fuzwayo said.

“This has been a longstanding issue and our hope is that they will deliver on the promise they made. We do appreciate their coming to Bulawayo to come up with measures to help during such a crisis,” Sibindi said.

“The Bulawayo water crisis needs a permanent solution, not firefighting because people are suffering out there and if we continue the firefighting again we will face the same problem next year. We will monitor closely to see that the government provides what they promised.”

Three Bulawayo city supply dams out of six have since been decommissioned due to low water levels as a result of poor rainfall in the past rainy season.