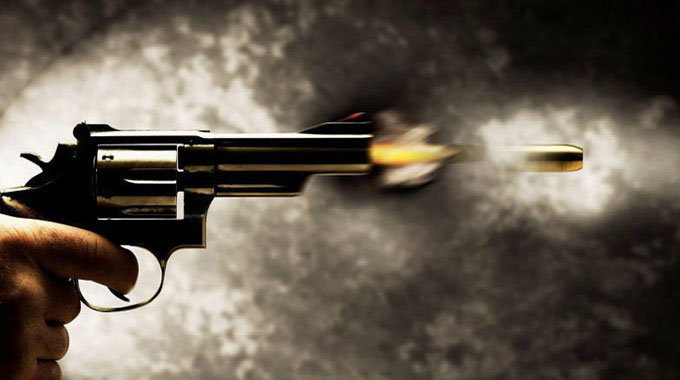 Popular Gweru socialite, Gamuchirai Mudungwe (30) who was shot and killed in a frenzied gun attack on four people by a local polygamous man, who accused his second wife of cheating was yesterday buried at Senga cemetery in an emotional send-off thronged by hundreds of mourners.

It was indeed a befitting send-off as mourners paid their last respects at her parents’ house in Senga high density suburb.

Gamu was shot at close range from the back as she fled through the stair cases of a flat at her friend’s residence in Gweru Central Business District on Friday after his alleged killer, Peter Dube confronted her together with the other three as he accused Gamu of being involved in his second wife’s alleged acts of infidelity.

Nyasha and Nyaradzo are still hospitalised with their condition reportedly now stable.

The road leading to Senga cemetery was totally sealed off as hundreds of lights flicking cars blocked all ends of the road behind a Nyaradzo Funeral Service hearse on its way to Gamu’s final resting place.

“We are very saddened that we have lost a lady of the people. For a very jovial lady like Gamu to die violently like that was the most cruel thing she least deserved,” commented one of her peers, and neighbour, Elizabeth Chidoori.

“She was a hardworking young lady and we are still in shock, we did not even know that she was as popular as this, it’s disheartening that she died a violent death,” she said.

Mr Simbarashe Dzvuka, father to  the late Gamu said they were not expecting some payment from the Dube family, but were keen to have the assailant brought to book so he could be accountable for the callous killing.

He confirmed the Dube family had reached out to them and allowed them to be at the burial.

“We are still in shock as a family and we are in mourning. The death of my daughter was just cruel by all measure but what can we do, we can’t resuscitate life. What we wish is to have justice in the end, this Dube guy should face justice, this is all what we can say at the moment,” said Mr Dzvuka.

Gamu is survived by one child.

Meanwhile, a convoy of over 100 cars drove from Kwekwe to Gweru to pick one of the shooting victims’ body Shelton Chinhango, a well know gold dealer in Kwekwe who was also buried yesterday.

Hundreds of gold dealers and artisanal miners who used to relate with Chinhango made a convoy of cars as they honked and skidded while giving Chinhango a befitting send-off.

On Monday,  Dube’s relatives sent an SOS saying they were now living in fear as they constantly received threatening calls from Chinhango’s peers who vowed to mete out revenge.

Dube’s young brother, Advance said they were advised by the police to move away cars from  Dube’s car dealership company after receiving calls from unknown people threatening to burn down the car sales premises.