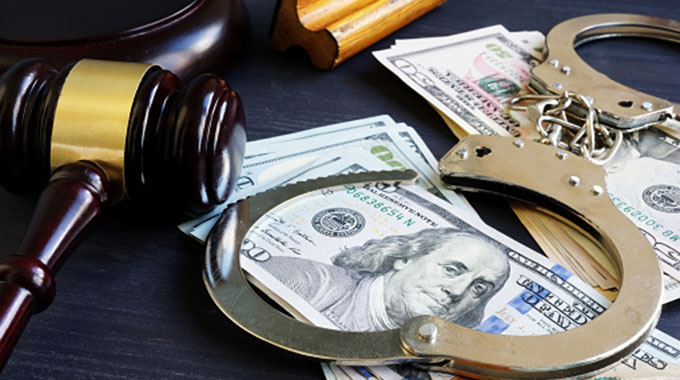 Nyore Madzianike
Senior Court Reporter
A Mukuru branch manager and his assistant allegedly stole US$100 000 from a sealed trunk of banknotes entrusted to their care in February, stuffing the cash they removed into their pockets, and had the security seals replaced in an attempt to shift the blame.

Yesterday branch manager Alexander Zengeni (30) at Send Money Home (Pvt) Limited, trading as Mukuru, and his assistant Raphel Ruduvo (34) appeared in court on charges of theft of trust property, that is property entrusted to their care when the trunk was left in their custody by Fawcett Security guards for safekeeping on behalf of Inter Africa, a financial institution.

The two, both represented by lawyer Mr Nathaniel Chigoro, appeared at the Harare Magistrates Court. They were not asked to plead to the charges when they appeared before magistrate Mr Dennis Mangosi, who remanded them in custody to today for determination of their applications for bail.

Mr Lancelot Mutsokoti, prosecuting, alleged that on February 23 this year, the security guards handed the two a sealed trunk, which the two signed for. Zengeni also signed for the money and secured the trunk in the vault.

Sometime in April, Rudovo was transferred to work at Mukuru headquarters at Tendeseka Office Park in Eastlea, Harare. Upon undertaking a hand-over and take-over routine with Fiona Musandirire, who had been promoted

to take his position, Rudovo allegedly handed all other valuables in his care except the cash trunk.

Musandire later discovered that the trunk, which was left in the vault had broken seals and asked Zengeni and Rudovo, who told her not to worry. On May 3, Fawcett security guards were sent to collect cash from Mukuru and Zengeni was notified in advance by someone called Antony from Inter Africa, where the money was destined.

It is alleged that Ruduvo volunteered to assist Musandire to process the instruction. Ruduvo asked Fawcett Security guards to put another set of seals on the trunk, allegedly without checking on the contents.

The court heard that the guards placed the seals and took it to Inter Africa where it was discovered that the money was missing. It is alleged that Zengeni and Ruduvo were spotted on the CCTV stashing money into their pockets.

Newer Post
Zimbabwe government should make up its mind – are sanctions a “curse” or “blessing” for country, or are they even real?
Older Post
Invictus Energy board ropes in Mtizwa