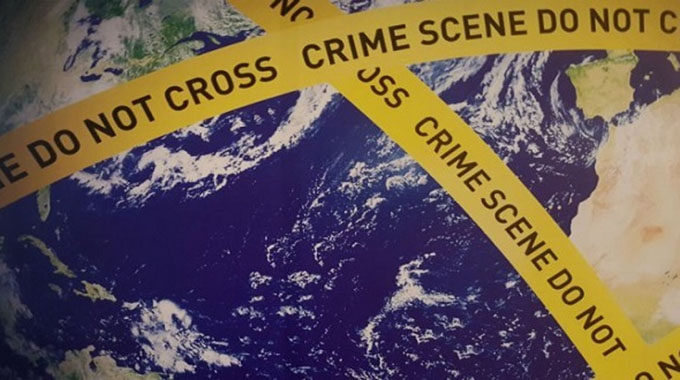 Climate Story Jeffrey Gogo
ENVIRONMENTAL crimes such as wildlife trafficking and illegal logging have overtaken the drug trade as the major income source for militias and terrorists in the DRC, Kenya, Mali, Somalia and elsewhere around the world, accounting for more than a third of their revenue.

The drug trade accounts for 28 percent, illegal taxation 26 percent, and kidnappings and foreign donations, 3 percent each.

“The interest in natural resources is rising, especially gold and other minerals, and timber, among many armed and criminal groups, and this can be currently seen in the Great Lakes region of Africa . . .

“Environmental crime is now slightly more lucrative than human trafficking, and is the third largest criminal sector worldwide, moving up from the 4th largest, after drugs, counterfeit goods and trafficking,” reads the report.

Altogether, the World Atlas of Illicit Flows, a study by the global policing agency Interpol, Rhipto, a Norwegian UN-collaborating centre, and the Global Initiative Against Transnational Organised Crime identified more than 1 000 routes used for smuggling and other illicit flows around the world.

The seven main extremist groups of insurgents and terrorists receive funding of between $1 billion and $1,4 billion each year combined. Worldwide environmental crimes now generate between $110 billion and $280 billion in total each year, 44 percent above the 2016 range.

Between $24 billion and $34 billion of the amount goes towards funding organised crime, said Interpol.

The cost impact of environmental crime is rising by about 7 percent annually, or two to three times the rate of the global economy.

The biggest thefts occur in the forestry industry, where illegal logging rakes in between $51 and $152 billion for criminals each year.

Dumping of toxic and electronic waste props up criminals to the tune of $12 billion yearly.

In all this, governments lose the equivalent of $28 billion in unpaid taxes.

For African countries experiencing ongoing conflicts, including Mali, Central African Republic, DRC, Sudan and Somalia, a conservative estimate is that overall, the militia and terrorist groups in those countries may gain $111 million to $289 million annually, depending upon prices, from their involvement in, and taxing of, the illegal or unregulated charcoal trade, said  Interpol.

According to the report, Al-Shabaab in Kenya and Somalia receives about $20 million, half from the illicit charcoal trade and the rest from other forms of taxation, while Boko Haram in Nigeria made $5 million and $10 million mainly from taxation, bank robberies, donations from other terrorist groups and kidnapping for ransom.

Over 8 000 rebels inside the DRC make at least $13 million a year from the exploitation and taxation of natural resources “and this sum is but a small portion of the total estimated value attributed to illegally exploited resources in the eastern DRC, which has been put at over $770 million a year”, it said.

Ivory Tower
Ivory provides a portion of the income raised by militia groups in the DRC and CAR, and is most likely a primary source of income for the Lord’s Resistance Army, which currently operates in the border triangle of South Sudan, Central African Republic and DRC. Ivory also provides a source of income to the Sudanese Janjaweed and other horseback gangs operating across Sudan, Chad and Niger, the study says.

“Given the estimated elephant populations and the number of projected elephants that are killed within the striking range of these militia groups, the annual income from ivory to militias in the whole sub-Saharan region is likely to be in the range of $4 million to $12,2 million,” Interpol said.

But ivory trade only accounts for just one percent of terrorists funding, although elephant and rhino populations are increasingly being decimated by poachers in Africa.

Interpol said that about 94 percent rhinos are poached in Zimbabwe and South Africa, which have the largest remaining rhino populations.

The value of rhino horns poached in 2013 were valued in downstream markets at between $6 million and $192 million, “but the value is much less at the supply end of the chain.”

“This threat (of environmental crimes by militias) must be addressed in peacekeeping and in enforcement and prevention, otherwise it will continue to grow and undermine development and security in decades to come.

“Environmental crimes, and associated transnational organised crime, which are often deeply embedded in state and non-state armed forces and the political elite, are therefore directly stimulated by continued or renewed conflict in many of the world’s most deadly contexts,” said the reported.