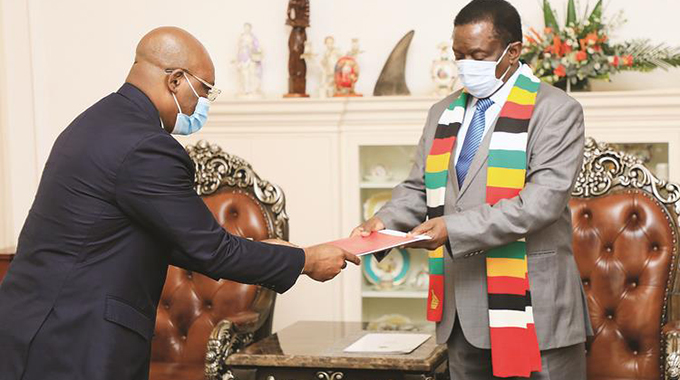 Farai Dzirutwe
The sound bilateral relations between Zimbabwe and Equatorial Guinea are set to reach new heights after the leader of the oil-rich West African nation, Teodoro Obiang Nguema Mbasogo, yesterday dispatched a high-powered 10-member delegation to Harare for consultations with Zimbabwean authorities.

Head of delegation Mr Oyono, together with the two other ministers, paid a courtesy call on President Mnangagwa at State House yesterday morning and delivered a special message from President Nguema Mbasogo.

In brief remarks after meeting the President, Mr Oyono said his team had been deployed to seek ways of strengthening already existing bilateral ties.

“We are all part of the African Union (AU) and the United Nations (UN) and we already have excellent bi-lateral relations. We are here to look at areas where we can strengthen the ties, and particular focus will be on tourism, mining and agriculture,” said Mr Oyono.

Dr Moyo said Mr Oyono and his delegation held talks on various issues with President Mnangagwa after which they presented a special message from their leader.

“Thereafter, there was what I would call a mini joint commission between Equatorial Guinea and Zimbabwe and resultantly, we had a meeting which had a number of issues which were covered.

The two countries also looked at various areas of investment which could be  explored for mutual benefit.

“We also looked at the expansion of the educational structure in the MoU so that we could increase the number of Equatoguineans who come into Zimbabwe so that they get into our tertiary education,” he said.

Discussions also focused on capacity building and how Equatorial Guinea had managed to develop urban infrastructure in a modest way.

The two countries have had excellent ties since 2004 when Zimbabwean authorities helped foil a planned coup against President Teodoro Obiang Nguema Mbasogo.

President Nguema Mbasogo has visited Zimbabwe several times, the last being in 2018 when he pledged to continue working with President Mnangagwa’s administration.

He also expressed desire to improve existing bilateral ties whose foundations were laid 16 years ago.

President Mnangagwa has in the past said his administration would maintain already existing cooperation agreements and explore more areas.

“We have several agreements between Zimbabwe and the Equatorial Guinea government. We will continue to implement them and embrace new ones as we go forward. We have always worked together.

“We have had cooperation with Equatorial Guinea; we shall cooperate today and tomorrow and forever,” he said.

There are no human rights without love