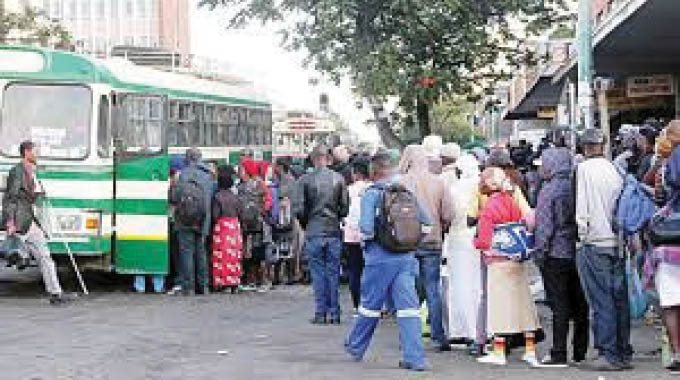 THE timely coming on board of the Zupco buses to service town routes that have all along belonged to private owned commuter omnibuses or kombis  has brought smiles to the majority of citizens who were labouring under the weight of unfair fare increase to and from work.

The increase in prices is never matched with salary hikes leaving a majority of the country’s workforce living pitifully and hardly affording basics and families with children learning in town are the most affected. The capacitating of Zupco buses in major cities and towns has put private players in the transport system to their rightful place hitherto taking advantage of the citizen’s desperation to fleece them of their hard-earned money by willy-nilly increasing fares.

Zupco buses have come as a relief considering their prioritisation in the allocation of fuel which means they are constantly on the road and there has not gone even a single day since their introduction without their presence.

The past week saw the introduction of the Zupco kombis which are fairly cheap as they are pegged at RTGS$2 compared to RTGS$5 charged by those not affiliated to Zupco but the biggest undoing apart from them being little is the lack of bus shelters.

Both the elderly, schoolchildren and the working class usually form snaking queues in the open where they are exposed to the sweltering afternoon sun and they are sure to get soaked by the rains if nothing is done to reconstruct bus shelters in town and at major pick-up points.

As the dry season is at its peak and the rainy season almost upon us the ball is now in the Government’s court to ensure clientele protection from the vagaries of the unforgiving weather. The reconstruction of the bus shelters that have long suffered both vandalism and neglect should commence as a show of seriousness on the part of Zupco and the city council to protect the workforce and the travellers.

“We met with the council management on Wednesday and discussed the way forward in terms of constructing bus shelters as we want to create a steady relationship with our clientele,” said Mr Madangwa.

BCC Town Clerk Christopher Dube confirmed the meeting citing that he was not in the office to give full details of the construction.

“Yes, we met with the Zupco management but at the moment I am not in the office to give full details but we discussed a number of issues,” said Mr Dube.

Mr Madangwa stressed the need for the bus shelters, confirming that they wanted to protect the clients from the rain. The recapacitating of Zupco that has coincided with the revamping of other parastatals has seen the Government reviving the company in three phases and President Emmerson Mnangagwa revealed that by the time the scheme is complete, the country will have — 200 buses from South Africa, 500 from Belarus and 1 000 from China.

This is expected to increase the number of people relying on the services of the bus as compared to kombis. Countries like China are serviced by efficient mass public transport such as trains and buses and Zimbabwe can pluck a leaf from such countries.

Meanwhile, Vice-President Kembo Mohadi last week said another batch of Zupco buses is expected in the country from South Africa within the next few weeks as Government continues to step up efforts to alleviate transport woes in Zimbabwe’s urban centres.

People who spoke to Sunday News said although it was already late, the Government should ensure the reconstruction of bus shelters before the commencement of the rainy season.  Ms Smangele Matsveru from Nkulumane 5 said with the growth of Zupco the process of erecting bus stop shelters should be initiated immediately.

“The rainy season will be coming in a few weeks and considering that the buses are increasing their numbers, it will be wise for the Government to start rebuilding these bus shelters so that no one will desert the buses for the taxis which are expensive. Building bus stops will go a long way in making sure that we as the customers are able to wait for the buses which currently do not have fixed timetables,” said Matsveru.

Mr Anele Sibanda from Pumula South said the construction of such structures would boost the citizen’s confidence in the Government which was working hard flat to fix the economy.

A student from Gifford High School who spoke on condition of anonymity said bus shelters would be of much value as people wait for a long time before the buses come because they are still a few.

“If the Government constructs bus shelters especially in town it will definitely help us as students who currently have our own queue and we only board as standing passengers once the bus is full,” he said.