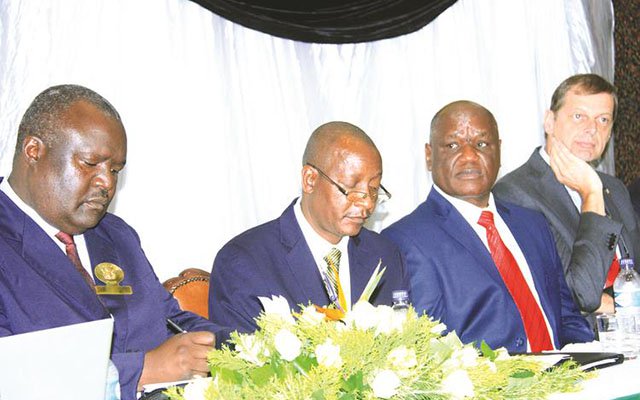 Daniel Nemukuyu and Nokutenda Chiyangwa
The European Union (EU) has injected $17 million into Zimbabwe’s justice system, in a move meant to improve justice delivery and strengthen the rule of law.

The funds will be spread across stakeholders in the justice sector such as the Judicial Service Commission (JSC), Law Society of Zimbabwe (LSZ), Legal Resources Foundation (LRF), the Ministry of Justice, Legal and Parliamentary Affairs and the Chief’s Council.

The assistance came following a recent undertaking by the EU to work with the Government after President Mnangagwa assumed power in November last year.

President Mnangagwa has called for strict adherence to constitutionalism. He has insisted that Zimbabwe will go to elections in the next five months, promising these will be free, fair and credible.

Addressing justice stakeholders at the launch of the Zimbabwe Justice Sector Programme in Harare yesterday, EU Ambassador to Zimbabwe Mr Phillippe Van Damme said the EU had put in Euros 14 million, which translates to $17 million.

“In total, the value of the support to the justice and rule of law sector under this new programme comes to Euro 14 million, roughly $17 million,” he said.

Ambassador Van Damme said the launch of the projects was timely.

“The projects we launch today are starting at an opportune time. The ongoing political transition presents a hopefully favourable environment for intensifying justice sector reforms. His Excellency, President Emmerson Mnangagwa, in his inaugural address and in his State of the Nation Address underscored the need for accountability to the people and for delivering services impartially, equitably and without bias,” said Ambassador van Damme.

He reiterated the EU’s willingness to cooperate with Government.

“Let me end by reiterating the recent EU’s Council conclusions on Zimbabwe that:

“The EU reaffirms its availability to engage constructively with the new authorities including through a structured political dialogue with political actors across the spectrum and with civil society on the basis of a mutual commitment to shared values focused on human rights, democratic principles and the rule of law,” he said.

Chief Justice Luke Malaba hailed the EU and the International Commission of Jurists (ICJ) for the support saying the partnership was based on the principle of mutual respect.

“The partnership has lasted for so long and achieved its objectives because it is based on the principle of mutual respect. The EU and the ICJ respect the principle that the Judiciary and the JSC are independent institutions with the right to conceive and decide on the appropriate course of action to be taken to achieve specific goals,” said Chief Justice Malaba.

“Our partners have not attempted to foist programmes on us. They appreciate that their role is to support us with funding and expertise to attain our objectives,” he said.

“In turn, we have recognised and respected their position by committing all support funds and other resources to the purposes for which they are intended. We have and will continue to ensure that there is maximum transparency and accountability in the management of such resources,” he said.

Justice, Legal and Parliamentary Affairs Minister Ziyambi Ziyambi said Govermnent was advocating for the promotion of judicial independence. He applauded the EU for its continued support to Zimbabwe.

“We thank the EU for the continued support and I implore you to continue working with us and supporting us,” said Minister Ziyambi.

The funding will be used in the training of traditional leaders in areas such as sentencing and other legal issues to capacitate them to justly deal with cases in areas under their jurisdiction.

The EU will also assist in the establishment of the specialised anti-graft courts to deal expeditiously with corruption-related cases. Part of the funds will be channelled towards training of magistrates, judges, court interpreters, clerks, court reserchers and others.

Chiefs and headman, who preside over court cases, will also be trained on the correct procedural justice, human rights and gender. The programme will also fund lawyers who assist those who cannot afford legal practitioners.

Lawyers will be capacitated to assist the needy on electoral and constitutional matters.

Newer Post
Peace and Reconciliation Commission gets down to business
Older Post
After Davos, work cut out for ED