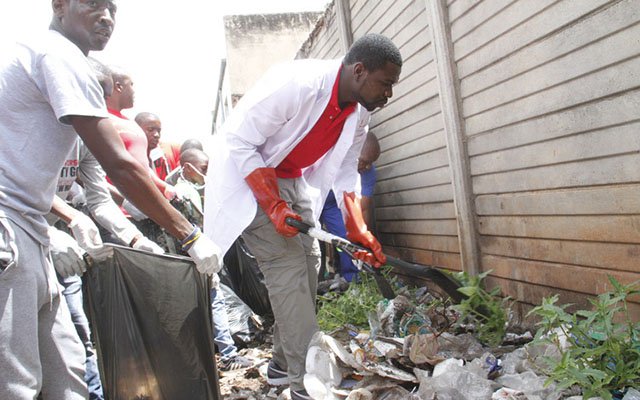 Roselyn Sachiti Features Editor
On Saturday February 3, 2018, Minister of Environment, Water and Climate Oppah Muchinguri-Kashiri announced to over 60 000 PHD Ministries followers that her ministry was working on ways to introduce a mandatory community service sentence for litter bugs.

This, she said, had been necessitated by the continued littering of streets by pedestrians and motorists, and dumping of refuse at undesignated places by residents.

Making the announcement to the congregants who were led by their leader Prophet Walter Magaya and wife Tendai to clean Harare’s streets and alleys, Minister Muchinguri-Kashiri commended the church for playing an active role in environmental cleanliness, urging the public sector to emulate the church’s good example.

“Waste management is no longer the responsibility of a single organisation. Avoiding littering results in less cleaning costs for local authorities,” she said.

“I commend Prophet Magaya and PHD Ministries for this initiative and urge them to adopt areas as well as streets on which they can place bins. The church can maintain these as litter free zones,” she said.

Well structured clean-up campaigns of a similar nature are likely to result in a healthier community as they rid the city of diseases like cholera which thrive on dirty environments, especially during the rainy season.

“Poor waste management can easily translate and manifest in diseases like cholera especially during the rainy reason,” she warned.

Her warning comes at a time when 95 cases of cholera have been reported countrywide as of Friday last week. 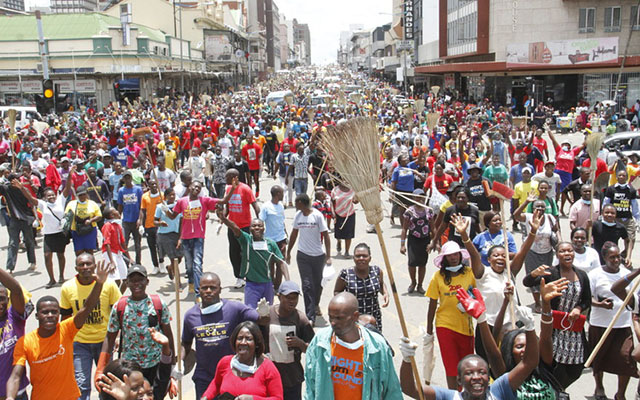 Some of the congregants who attended the clean-up campaign

Four people have lost their lives as a result of cholera. Large groupings like churches have a role to play in maintaining the environment.

“My wish is for Christians to educate each other through environmental awareness programmes,” Minister Muchinguri-Kashiri said.

As a way of giving back to the community they exist in, PHD Ministries’ congregants had gathered at Robert Mugabe Square as early as 8am for a clean-up campaign which was to begin at 9.

When their leader arrived, congregants were divided into 55 groups and each group allocated a part in town to work on.

Each person had a broom and received a pair of latex gloves and a bin liner.

Other delegates who were attending a Business Seminar and Leadership Conference which kicked off on February 1 and ended Sunday February 4 from countries such as China, UK, Botswana, Portugal, Swaziland and SA also eagerly took up brooms ready to invade Harare’s streets for the clean-up campaign exercise.

After being allotted spaces to work on, the groups made beelines into the city centre getting down to business in places like Market Square, Copacabana rank, Charge Office, and various alleys in the central business district.

Some could be seen removing mounds of dirt from clogged storm water drains which had been a headache in the city.

Others removed dumped old furniture and rubbish from alleys while some used shovels to remove grass that had started to grow around traffic lights.

Most alleys which are supposed to be maintained by building owners had the most dirt and as bin-liners filled up, the extent of the dirt could be clearly seen.

Three City of Harare refuse collection trucks slowly followed picking up the rubbish which had been placed at different points.

As the congregants walked further into the CBD, street vendors some of the biggest polluters, had their own views. Some were just happy to see Prophet Magaya in a white dustcoast holding a broom and cleaning. Others shouted that he had traded the Bible for a shovel and broom to become a “madhodhabini” (council refuse collector).

There were those who just looked on and went about their business, while passers-by at Gulf Complex shouted that the church should clean the streets everyday. 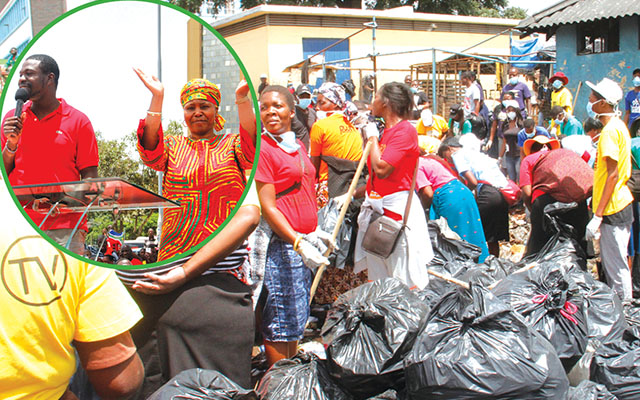 Minister Muchinguri-Kashiri thanks PHD Ministries congregants for cleaning up Harare (inset). In black plastic bags is some of the litter that was picked up

From Gulf Complex, the carnival of cleaners moved into Robert Mugabe Way, bringing business to a standstill.

Cars hooted, while pirate taxis and kombis operating from an illegal point at the corner of Robert Mugabe Way and Julius Nyerere complained that customers were being blocked by the cleaners.

Pedestrians and motorists thanked the church for its effort to keep Harare clean.

The sea of people then poured into Charge Office rank, where there was a repeat of what had happened at other ranks.

In no time, the cleaners moved towards Mohammed Mussa Wholesalers, making a turn into Robert Mugabe Way which would lead them to Road-port along Simon Muzenda Street.

At that point, everyone who had taken part in the clean-up campaign gathered and made a u-turn back into Robert Mugabe Way which would take them to Robert Mugabe Square.

After taking care of their business for the day, the congregants started walking and spreading the word to keen followers, but those who saw litter still picked it up and placed it in bins.

Prophet Magaya described the clean-up campaign as a success as they had achieved their goal of helping to keep Harare clean and assist in restoring its Sunshine City status.

He said as a way to help curb cholera and typhoid, his church would continue holding such clean-up campaigns to minimise dumped refuse which attracts flies that spread diseases.

Council spokesman Mr Micheal Chideme said it was sad that while it is a criminal offence to litter, people still break the law. He said building owners should maintain alleys behind their premises as this was the reason council asked businesses to put up gates on all alleys.

Chideme said it was a crime to dump refuse in drains, adding that the road verges by-law of 2016 provides for that.

According to the by-law, every occupier shall maintain the road verges adjacent or opposite to the property that he or she occupies.

The law also states that no occupier shall deposit or abandon or cause, or permit to be deposited or abandoned, any litter in the road verges.

Occupiers are required to maintain shrubs on road verges and prohibited from planting or allowing shrubs to be planted as well as trees that may obstruct traffic or any informative sign.

“No occupier shall cut or permit trees to be cut outside the boundary of his or her property without authority of the council,” it further stipulates.

Churches have a role to play in maintaining the environment considering the numbers they draw. If followed with consistency, initiatives of this nature could solve some of the environmental and health headache the country faces.