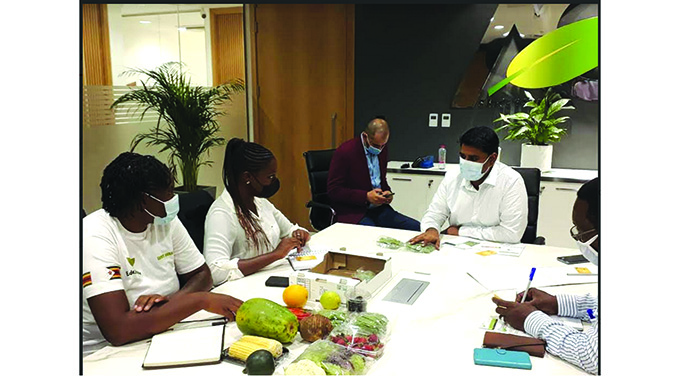 Ali Gholami Import manager Shihad Aboobacker (centre) explains the quality and standards that are expected for one to export to his company, one of Dubai’s leading vegetables and fruit supplier for the hotel and catering industry. Looking on are exporters from Zimbabwe attending the ZimTrade organised outward seller mission

Zimbabwean companies should now focus on exporting value added products to augment mineral and raw products that are largely being exported currently, ZimTrade board chairperson Mrs Clara Mlambo has said.

While Zimbabwe has been growing its exports over the years, they are biased towards mineral and primary products.

But according to Mrs Mlambo Zimbabwe has a comparative advantage in the production of a number of products and should focus on those in its export drive.

Mrs Mlambo mentioned horticulture products, tobacco products as well as exotic leather and leather products as some of the products that Zimbabwean companies can focus on exporting.

“As ZimTrade, we are cognisant of the fact that UAE is strategically located between the East and West, which makes it accessible to emerging economies in the Gulf region, linking shipping routes and facilitating goods movement between the different regions in Middle East, Asia, Europe and Africa,” Mlambo said.

She also highlighted that without production in terms of horticulture, the UAE is becoming a major supplier of horticulture into the Gulf Cooperation Council countries through the concept of re-exports.

“What this reflects is that our Zimbabwean exporters who are able to create solid markets in Dubai will likely find it easy to use UAE as a gateway to land their products in other markets in the Middle East,” she said.

ZimTrade’s export drive comes at a time Zimbabwe is committed to attaining upper-middle-income status by 2030.

Trade is central and key to achievement of this target, according to Mrs Mlambo.

She said ZimTrade, as a trade development and promotion organisation, has a key role to propel the country to attain economic growth through trade.

There is potential for Zimbabwean farmers to increase exports to UAE if they secure direct exports, which will also improve their foreign currency earnings.

For farmers that can produce more, there are indications that Dubai will remain a viable market considering the total fresh produce bill of the market.

According to Trade Map, the fresh produce import market in UAE were valued at over US$4 billion and of this amount, US$2,3 billion is re-export to Iran, Saudi Arabia, Yemen, Oman and Iraq.

Meanwhile at least 10 Zimbabwean companies are taking part at the outward seller mission.

One of the companies taking part is Intefresh, and executive chairman Mr Mahomed Jassat, said Zimbabwean companies looking to export to Dubai should try to cut corners when exporting to countries like Dubai as this would tarnish the image of the country.

He said while opportunities are abound, everything has to be done in a thorough and professional manner.

“Think about every little detail. If you do the right thing you will have phone calls every single day, of people wanting to buy because Zimbabwe is producing amazing products,” Mr Jassat said.

His company Interfresh as well as its sister company Farmgate is currently exporting most citrus products to Dubai and the rest of the Middle East.