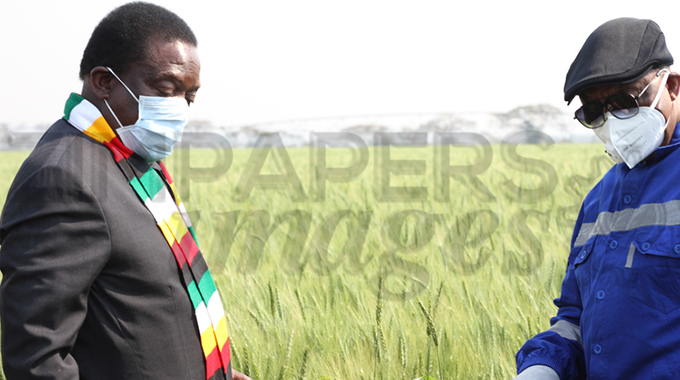 Lincoln Towindo Agriculture Reporter
THE Grain Marketing Board (GMB) has started distributing inputs to farmers to give them a head start ahead of the 2020-2021 summer cropping season.

The inputs are not being stockpiled, but distributed as soon as they are received from suppliers.

Close to 2 million households, particularly those who have received training through the Pfumvudza Conservation Agriculture Programme, will benefit from the recently remodelled Climate-Proofed Presidential Inputs Scheme.

Over 1,5 million hectares have been set aside for planting crops, with a target of over 3,6 million tonnes of maize.

Weather forecasts show that Zimbabwe will receive normal to above normal rains between October and March next year, raising prospects of a bumper harvest.

“The Presidential Inputs Scheme was launched recently in Guruve by VP (Dr Constantino) Chiwenga and since then we have started distributing the inputs.

“You are aware that it is being done under the Pfumvudza Programme, which is a conservation agriculture model,” he said.

“What happens is that Agritex is coming up with a list of beneficiaries who underwent training, and once we receive that list, we distribute the inputs to the wards. We are anticipating to distribute to over 1,9 million farmers who have been trained.

“We are distributing the inputs as and when we receive them from suppliers; meaning we are not waiting to first stockpile consignments before distributing.”

Beneficiaries of the inputs, which include seed and fertilisers, are expected to have three plots — one for maize, traditional crops and another one for oil seeds.

VP Chiwenga launched the inputs distribution scheme at Nyabvuti Farm in Guruve on August 20, signalling the beginning to the distribution programme.

“Under Pfumvudza, we started by running a campaign to mobilise farmers to be part and parcel of the programme,” said Mr Gondo.

“We started by training our extension workers across the country and then the farmers themselves. Basically, what we have in our plans is that between July and August, farmers would have started holing out so that by the time the rainy season comes everything will be in place.

“We are also encouraging them to bulk litter, which they will use as mulch that can be in the form of grass or stalks from last season’s harvest. So all that has been done by now.”

He said following the launch of the inputs distribution programme, provincial launches will be held countrywide.

“We have also had a very aggressive publicity campaign in farming areas and we are confident that the message has gone through.

“In connection with that programme, we are also running a programme on soil conditioning where we are encouraging farmers to have their soil tested for PH levels and in return recommendations on how to farm on that land.

“We are also, as part of Pfumvudza, encouraging rotation, especially involving legume crops. But for this season, we are confident that we are ready for the season; we have covered all angles.”

Under the Pfumvudza concept, communal farmers practise conservation agriculture which guarantees high yields even in cases of extended mid-season dry spells. It involves the utilisation of small pieces of land and applying the proper agronomic practices for higher returns. The concept is being applied for maize, traditional grains and soya beans.

Hundreds of extension officers have also been deployed to track and monitor the farming practices, as well as provide advice and assistance to farmers where necessary.

Weather forecast
Forecasts are pointing towards normal to above normal rains throughout the season. Meteorologists are predicting greater chances of a La Nina, a weather event normally associated with wetter conditions in Southern Africa.

Last week, the Southern Africa Regional Climate Outlook Forum (Sarcof) predicted that most of central and southern parts of Southern African Development Community (SADC), including all of Zimbabwe, would receive good rains.

Above-normal rainfall is defined as rainfall lying within the wettest third recorded during the 30 years from 1981 to 2010.

The Meteorological Services Department said the national forecast will be issued this week.

Revival
The early distribution of inputs and new farming methods are part of a multi-pronged strategy being deployed by Government to promote food security and save foreign currency through import substitution.

In addition to facilitating the injection of fresh investment, promoting optimum use of land, viable producer prices and farm mechanisation, Government is also investing in irrigation to wean farmers from rain-fed agriculture.

Last week, President Mnangagwa launched the Agriculture and Food Systems Strategy, which is projected to turn agriculture into a US$8,2 billion sector by 2025.

The strategy was drawn from the Agriculture Recovery Plan and the Livestock Growth Plan.

The plan is an exhaustive undertaking which outlines specific key projects, including the provision of inputs to both vulnerable and smallholder farmers, fostering market links, climate-proofing all agriculture support programmes, implementation of market-based programmes which bring in the private sector and improve competitiveness of agriculture commodities on local and export markets.

The strategy is anchored on four pillars: enabling agriculture policy and the regulatory environment to facilitate the flow of investment into the sector; appropriate agriculture investments for productivity, food security and resilience; efficient agricultural knowledge, technology and innovation system; and the agriculture sector coordination for responsive planning, implementation monitoring and evaluation.

Speaking at the launch of the programme, Lands, Agriculture, Water and Rural Resettlement Minister Dr Anxious Masuka said the strategy will revitalise the sector.

“The two strategies . . . are a product of an inclusive and participatory consultative process,” said Dr Masuka.

“Their implementation will result in the attainment of national and household food security and nutrition security, import substitution, expanded and diversified exports, employment creation, which will see an improvement in access to agricultural finance; and deepen and broaden value addition.

“The Government is keen to see a well-coordinated and functioning competitive productive and profitable agriculture sector.

“To do this, farming must be approached from a business perspective.

“This requires the co-operation and collaboration of all stakeholders to ensure there is efficient flow of investment into the agricultural sector.”