‘Farmers should contend with $300 daily pay-out’ 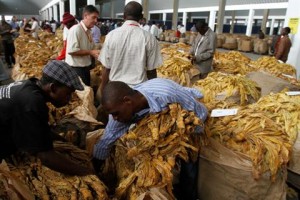 THE Tobacco Industry Marketing Board (TIMB) will not crucify the central bank if it fails to pay $300 per day to tobacco farmers, as there are other pressing cash demands in the economy.

TIMB chairperson, Monica Chinamasa told journalists yesterday during a tour to assess tobacco floors’ preparedness ahead of the opening of the marketing season next Wednesday that the Reserve Bank of Zimbabwe (RBZ) was doing its best.

“I have a lot of faith in RBZ. If they say $300, they will do their best to look for $300, but if they fail to find it, we are not going to crucify them. They are just doing their best. We are not the only one who needs the money, the whole country needs the money,” she said.

Chinamasa’s remarks come after the RBZ failed to stick to its promises of paying farmers $1 000 per day last season.

Last week, RBZ governor John Mangudya said this season growers would be paid $300 per day through banks stationed at auction floors upon presentation of sales statements.
He said the balance would be transferred into growers’ bank accounts.

Asked if TIMB was going to push for an upward review of the $300 pay-out given that farmers were complaining, Chinamasa said there was nothing she could do if the cash was not available.

“We are guided by RBZ, everybody knows what is in the country. RBZ can only give what’s available. We don’t blame anybody. We have to create the money; this is where tobacco comes in strongly,” she said.

“From now on, we should see an increase in the inflow of foreign currency. So, RBZ can only work with what’s available and I know our people understand.”

Chinamasa ordered the TSF management to deal with the ballooning of vendors and state of the road leading to the floor.

TSF executive director for agriculture cluster, Peter Mujaya, promised to put measures in place to deal with the situation.

Chinamasa said the e-marketing system will be limited to fewer bales, as it cannot accommodate huge volumes.

The e-marketing system was introduced last season but failed to take off at the opening of the auction floors due to technical glitches.

The system worked intermittently throughout the marketing season. Tobacco is one of Zimbabwe’s largest foreign currency earners.

Last season, the tobacco sales generated $600 million after 190 million kg of the crop went under the hammer.

This year, Treasury has projected an output of 200 million kg.