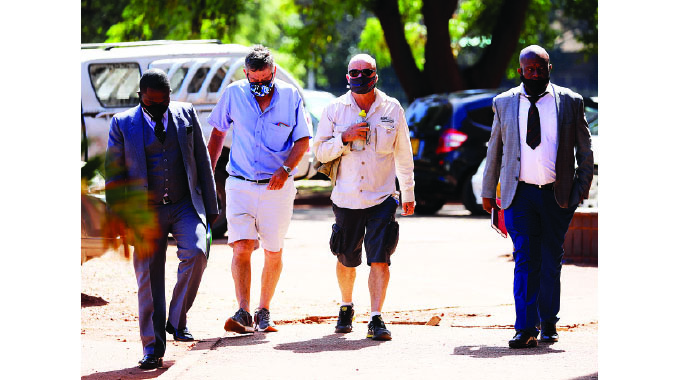 BUSINESSMEN John Taylor and Alexander Kirkman, who own 50 percent shares each in Feedmix (Pvt) Limited yesterday appeared in court facing allegations of stripping assets from their company’s premises after selling it to another Harare businessman.

Taylor and Kirkman separately appeared at the Harare magistrates court charged with fraud.

They were both not asked to plead to the charges when they appeared before magistrate Mr Dennis Mangosi who remanded them to May 18 on $50 000 bail each.

They allegedly jointly defrauded Yitbarek Yemanu Tekie of more than US$700 000 in cash and assets.

Circumstances leading to their arrest are that on January 11, Taylor, who is the executive director and owns 50 percent shares in Feedmix (Pvt) Limited sold the shares to Tekie for US$1 050 000.

Tekie is said to have paid US$615 000 towards the purchase of Feedmix.

Taylor is alleged to have connived with Kirkman, who also owns the other shares in Feedmix, and started stripping the firm’s assets.

Upon realising that the assets were being stripped, Tekie approached Taylor and Kirkman in a bid to stop them but the duo employed security guards to block him from gaining access into the company’s premises.

Kirkman is alleged to have transferred a stand into his other company — Open Curve Investments — without Tekie’s knowledge. He also allegedly withdrew US$29 000 from Feedmix account pretending as if he wanted to purchase the stand in question into Feedmix name and converted the money to his own use.

Kirkman also allegedly withdrew another US$50 000 from the company after misrepresenting that he wanted to purchase soya beans on behalf of Feedmix before converting the money to his own use.

He allegedly further withdrew US$43 000 and US$35 000 pretending as if he wanted to purchase steel for the company and paying legal fees to Linda Harrison.

As a result of the alleged misrepresentation Tekie lost US$157 000 from his investment.