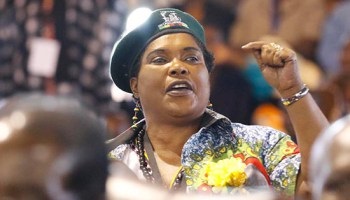 MUTARE – Mandiitawepi Chimene –the motor mouth former minister of State for Manicaland Province and a fierce critic of President Emmerson Mnangagwa – has broken her silence for the first time since she went into hiding more than six months ago.

Chimene skipped the country into neighbouring Mozambique in November last year soon after the military stepped in to dislodge former president Robert Mugabe from power, and replaced him with his ally-turned foe, Mnangagwa.

Before Mugabe’s dramatic fall after 37 years of iron-fisted rule, Chimene – a key member of the Generation 40 (G40) faction – had turned herself into one of Mnangagwa tormentors, stonewalling the former vice president’s ambition to succeed Mugabe.

On numerous occasions, she savaged Mnangagwa — then vice president — accusing him of plotting to unseat the despot through unconstitutional means.

Following Mnangagwa’s dramatic rise last November, Chimene, along with a coterie of G40 functionaries, became conspicuous by her deafening silence, except for Patrick Zhuwao and Jonathan Moyo – former Zanu PF politburo members – who have remained outspoken.

But this week, Chimene spoke for the first time since she slipped out of the country to evade the military which was targeting “criminals around Mugabe” under an operation code-named Operation Restore Legacy.

Chimene told the Daily News on Sunday his week that she was taking a break from politics.

“I have no ill feelings at all with what transpired. That is a political phase and it’s acceptable. When there are changes in government, this was bound to happen.
It’s time to rest from politics and concentrate on business and farming,” she said.

“I do not want to be commenting on politics in the current context and l have not been active,” added Chimene.

Chimene declined to disclose her location.

The former Provincial Affairs minister appeared to be roaming as she is currently using a local mobile number.

She also refused to be drawn into discussing politics, citing the sensitivities of the current political environment.

Instead, she was more forthcoming in discussing the unfolding saga involving her daughter, Ellen Zimondi, who was arrested recently for allegedly impersonating Lands minister Perrance Shiri to fraudulently acquire and facilitate farm allocations.

Chimene said the media should not muddy her name by prefixing Ellen’sname with her own, arguing that her daughter was old enough to carry her own cross.

“People should learn to confine themselves to individuals they are dealing with. If they arrest someone, she has her name. She is called Ellen Zimondi or she can use her so-called husband’s name, Kanjanda. She is a grown-up, she is above 30 and very responsible for her own deeds,” she said.

She said police have taken too long to act on the alleged fraudulent activities, which Chimene said first surfaced when she was still presiding over Manicaland Province.

“I told CID Mutare (about this). l asked them when I was still minister to arrest my so-called son-in-law (Kanjanda),” a furious Chimene said, suggesting her son-in-law could have been behind Ellen’s actions.

Chimene claimed at the time she had raised her complaints with the police and even pushed for Kanjanda’s arrest for possible prosecution after he had allegedly defrauded people by claiming that he was selling land on her behalf.

“I told the police that people are being defrauded of their money on the pretext that l had land that l was offering for sale.

“I even had the complainants in my office and l handed them over to the detectives to work on the case but they didn’t do anything (about it). I even told my daughter that if she continued to condone her husband’s activities, she was going to be in soup for being an accomplice,” Chimene said.

She said she even warned her daughter that if the rumours about her husband were true, she too was going to be arrested as an accomplice.

“I once called her and told her that if the rumours I’m hearing are true then you are also going to be arrested as an accomplice. So people should confine themselves to dealing with Ellen Zimondi and not involve me.”

Chimene was particularly miffed by claims made by the investigating officer that Zimondi could skip the country into Mozambique to join her mother if granted bail.

“The police detective was saying if released she will flee to Mozambique to her mother but where in Mozambique can they find me? No one knows my whereabouts.”

She said she was wherever she was by choice and would go wherever she pleases without hindrance, including coming back to Zimbabwe.

“I’m here because that is where I’m. No one can stop me from going wherever l want to go. I’m a citizen of Zimbabwe and I’ll come home when I want to come.”