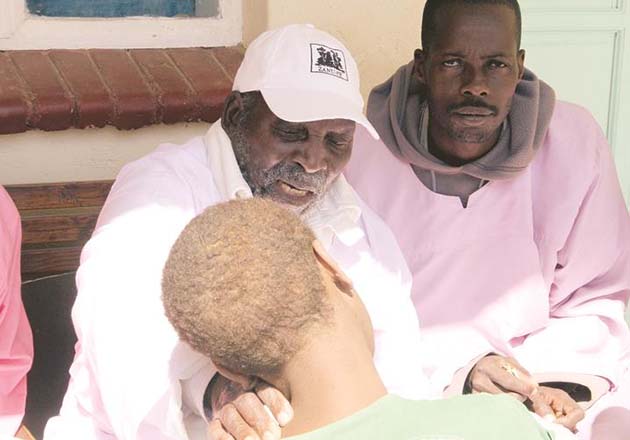 HARARE – An ugly fight has broken out among family and church members of the late mystic preacher, Aaron Mhukuta — who was also commonly known as Mudzidzi Wimbo — and who was famous for having allegedly prophesied six decades ago that Zimbabwe would one day be led by ousted former president Robert Mugabe.

Wimbo died last week, with his burial stirring controversy as his divided church and family held two separate ceremonies — with the majority of the family, including many of his children failing to attend the main event, as a faction in the church allegedly took over all proceedings and blocked them out.

Well-placed sources told the Daily News yesterday that so bad was the infighting among Wimbo’s family members that President Emmerson Mnangagwa had now allegedly been forced by circumstances to send senior members of the ruling Zanu PF to the feuding parties — in a desperate endeavour to try and mediate the dispute.

Wimbo, who is survived by two widows, left behind several properties — including a number of houses and a state-of-the-art school which is nestled in Mt Darwin, close to his church shrine.

“We are going to Mt Darwin where we are hoping to settle the inheritance issue. The prophet left two wives and so many children.

“We have been advised that the vice president (Constantino Chiwenga) will also be going there, and hopefully that will go a long way in resolving the dispute,” one of the sources said.

Wimbo’s eldest son, Exnevia Gomo, told the Daily News that since 2015 — when their father was taken away from the family to stay at his shrine permanently — they had not had any interaction with Wimbo and had been looking up to the government to resolve the matter.

“We have exhausted all the means to find a solution and we are still waiting to see our father’s body, as they refused to allow us to see it … and they went on to bury him while most of us were not there.

“We have now written to the president and we are yet to get his response. Hopefully, we will get that response soon,” the grieving Gomo said.

The provincial minister for Mashonaland Central, Martin Dinha — who was one of the government officials who attended Wimbo’s burial at the prophet’s heavily-secured shrine — said the tension during the burial was palpable.

“It is an open secret that the family and the church have a long-standing dispute which, regrettably, was unresolved until the death of the father and church leader.

“Speaking for myself as a lawyer, maybe the dispute and conflict could have been resolved and settled in favour of either contesting parties by the courts.

“I don’t want to get myself entangled in the dispute, and all I yearn for as a public official is peace, harmony and understanding among communities and the amicable resolution of disputes — be it at churches or within families, or between the two social institutions,” Dinha said.

At the height of Zanu PF’s deadly tribal, factional and succession wars, there was a mad scramble by the ruling party’s brawling factions to control Wimbo — who was acclaimed by his followers for having uncannily prophesied in 1957 that independent Zimbabwe would be ruled by a man with the name of an angel.

While there is no documentary evidence to prove Wimbo’s prophecy, this remarkably came to pass when ousted former president Mugabe, whose middle name is Gabriel, took power from the British in April 1980.

This was why, as Mugabe approached the twilight of his political career, brawling Zanu PF factions sought to control the enigmatic preacher — who in 2015 claimed Mnangagwa, who was then the nonagenarian’s deputy, needed help to ascend to the presidency.

That year, Mnangagwa had visited Wimbo at his shrine and got involved in a bizarre church rite. He was told by Wimbo — also known as Mudzidzi Majinetsa — that it was time that he got others to put shoulder on the wheel to help him in his higher political ambitions.