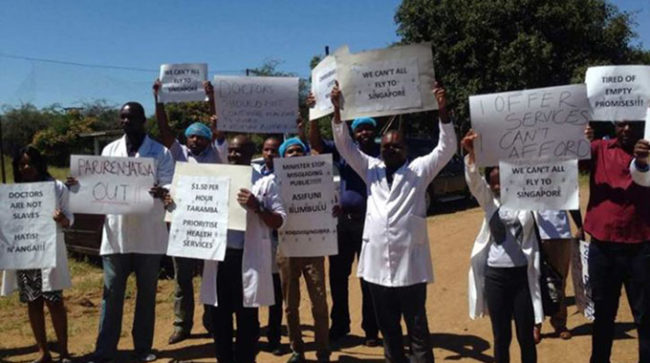 ZIMBABWE’S health sector is mired in a crisis as public hospital doctors have been on strike for over a month. The job action has resulted in patients being turned away from hospitals while there have been widespread reports of deaths in circumstances which could have been prevented had patients received adequate care. Doctors are demanding better salaries and allowances, as well as conditions of service, but the government has offered a maximum of 70% salary increment which has since been turned down. Presently, there is an impasse as both sides have adopted hardline stances.

In light of this, Zimbabwe Independent senior reporter Bridget Mananavire (BM) had an interview with Zimbabwe Hospital Doctors’ Association vice-president Masimba Ndoro (mn, pictured) on these and other issues. Below are the excerpts of the interview:

Prior to that, we had serial engagements with the employer, requesting the employer to address this matter of reviewing our allowances. But the engagements were fruitless until our members saw it fit to declare the incapacitation.

It started gradually, with a few people not reporting for work raising their concerns that transport fees, rentals, food costs were outrageously more than they were earning. So, on September 3, the whole group decided to declare incapacitation. We knew that the salaries were not going to sustain us until the next pay date.

BM: How did the government respond when you declared incapacitation?
MN: There was a bipartite meeting which was called, where the government offered a 30% increment in our salaries. In that meeting Dr Peter Magombeyi, Dr Tawanda Zvakada and Dr Nyasha Banga were representing the doctors. As Zimbabwe hospital doctors and other health associations, we declined that offer and the representatives walked out of that meeting. It was a few days after that bipartite meeting that Magombeyi disappeared.
BM: Government went on to offer a 60% increment, why did you reject that?

MN: The cost of living has actually increased , now it’s by more than 1 500% and for us as doctors, we have been subsidising the employer for far too long, trying to report for duty on time and trying to attend to patients on full capacity. But now comparing to what is happening out there with increment of 1 500% of prices compared to the 60% increment, who would subsidise the increment and how? We really felt that the employer was not serious because they are not forthcoming.

They are a lot of promises which were made by the government which have not been addressed since 2018. A lot of collective agreements signed, with government promising to implement which have not been implemented. It just means that at this particular moment, the employer is not willing to come to the table with a reasonable offer which we can adjust to and report for work.

BM: What kind of offer would you accept right now?

MN: The constituency I represent are requesting an adjustment on our on-call allowance, the on-call allowance is the money we get when we work overtime, a lot of us doctors work overtime during on-call and travel at ungodly hours trying to serve patients. We were asking the employer to adjust that allowance. We earn ZW$1 200 per month, which will be broken down to ZW$7,50 per hour.

BM: There has been criticism that the doctors are heartless as people are dying, and that you are being selfish and that you should at least have a heart and attend to patients.

MN: It is quite sad that we are not in a position to be offering services we should be offering, services which we are trained to offer. What I can tell you is a hungry doctor is a dangerous doctor to the patient. The government is the one which is responsible for offering quality and affordable healthcare to its citizens, and my job as a doctor is to make sure these services are implemented at the hospital.

Now the government has the mandate, my mental and physical well-being is catered for in the sense that I should be financially and socially secure and also my security should be guaranteed as regards to my workplace. Hence I should not be thinking of what I do not have when attending to a patient. I should be in the right state of mind and be physical well when attending to a patient. So the responsibility with what’s happening to the healthcare system solely lies on government.

BM: How long are you willing to hold fort, and what’s your next step from here. MN: So this is not a resistance, we are actually appealing to the employer to come up with sustainable solutions to address this impasse. The rate at which this impasse is going to be solved solely depends on the will of the employer. The employer is responsible for my financial welfare. If a reasonable offer is given to us, and we are capacitated to go back to work, we will go back to work.

Now in our case, we really feel that as doctors we have peculiar needs that are guided by the nature of work, for example some healthcare workers are allowed to flex to work for maybe two days per week, but for doctors its continuous every day you should be there on time and if you are on call you should work overtime.

So on the negotiating table, the grievances will not be uniform. So this is actually a plea to the employer to come up with a solution. If you notice this impasse has been going on for long before we even came, and it is repetition of the same thing. It is something that needs to be revised to come up with a different platform.

As doctors do not draw pleasure from any of this, we are supposed to be in the hospitals saving lives. But the employer leaves us with no choice.
BM: Do you have members who have done an assessment of the situation in hospitals?

MN: Basically there are no patients because there are no doctors in the hospitals. I understand the ministry has deployed doctors from the uniformed forces, which is insignificant looking at the population of this country, they are highly overwhelmed.

So it is a sad situation, this is more of a silent genocide going on, because if there are no patients in hospitals, people are dying are at home, because they know there are no doctors at the hospitals. There should be something done to just capacitate doctors to report for work and save lives.
BM: Do you have statistics of the current death rate?MN: Unfortunately we do not have those.BM: How much do you earn now, what is the total package MN: The total package is ZW$1 900 including the on-call allowance.BM: So if no solution is reached on this current impasse, what will happen?
MN: I think I’m not in a position to determine what will happen, but like I said the responsibility of provision of healthcare services solely lies on government.

BM: Can the government fire you, or punish you for this?MN: I do not know, but a government which has care to its citizens will not fire doctors, they should actually try to engage doctors and since we are one of the essential services then try and address our grievances as a matter of urgency. They should not be at loggerheads with government. They should make sure doctors are capacitated.

BM: What is your opinion on the suspension of paediatric surgeon Bothwell Mbuwayesango and Cardiothoracic surgeon David Chimuka by the University of Zimbabwe for influencing doctors not to report for work?

MN: It is quite sad because Mr Mbuwayesango is one of the best paediatric surgeons of this country. There is a history of him being the first Zimbabwean to separate the Siamese twins in 2014, an achievement to the practice of medicine in Zimbabwe. This even shows we have the expertise and we are capable of delivering quality healthcare. He has experience of over 30 years in public hospitals.

I think it’s an ill-advised move by university authorities. And Mr Chimuka is a well-experienced cardiothoracic surgeon here in Zimbabwe who has done a lot to the practice of cardiothoracic surgery. He is behind us having open heart surgery being done in Zimbabwe hospitals until government failed to support the activities. A lot of us have passed through their hands.

This is an attack on the medical profession and what we know is medicine is a noble profession world over which holds its own dignity and integrity.
BM: What would be your final word on the whole situation?