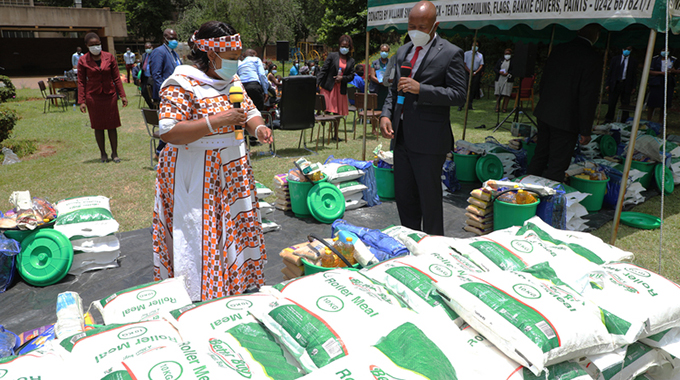 Tendai Rupapa
Senior Reporter
FIRST LADY Auxillia Mnangagwa yesterday held a heart-to-heart interactive session with parents of children living with cancer as she sought to have a deeper understanding of the challenges they face while giving them hope and comfort.

The visit comes ahead of the International Childhood Cancer Day (ICCD), which falls on February 15 annually.

The day is a collaborative campaign to raise awareness about childhood cancer and to express support for children and adolescents with cancer, the survivors and their families.

The First Lady, in her capacity as health ambassador, has been leading a campaign to screen men and women nationwide of breast cancer, cervical cancer and prostate cancer.

She has also in the past roped in experts to spread awareness on the disease which continues to kill thousands of people across the globe.

In yesterday’s interactive session, men and women who were at Parirenyatwa Group of Hospitals gave heart-rending accounts about the journey they have travelled as parents of children living with cancer.

One such parent, Caroline Nhamburo said she got to know of her child’s predicament three months after giving birth.

“Three months after giving birth to my child in the rural areas, the child started losing weight and being anaemic. The child would at times be weak and as people who lived in the rural areas we always thought the child would get better without seeking medical attention. We used to spend much time in the fields and suspected my child had been bitten by a scorpion and later took him to the nearest clinic where they treated him according to my narration since I told them it might have been a scorpion bite.

“Things got worse and I was referred to Parirenyatwa where I eventually got help. Tests which were done showed that mwana ane sickle cell,” she said while fighting back tears.

The First Lady comforted her and assured her that through treatment, the child would get better.

“We are still to get a cure for this disease. Madzimai, I do not want you to be overburdened and troubled in your minds. To find people around you like health experts, doctors, WHO officials and those from Kidzcan are here showing that what you are going through is being seen and people are with you. We may not be together day-by-day like this, but you are not alone in this problem,” the First Lady said.

“I have come so that we discuss as parents since I am a mother just like you. I am therefore pained by the problems that are faced by parents of children living with cancer. I am here so that we assist each other with various things and I also want to know how you are coping. How did you notice that your child has cancer? If you remember, I traverse the length and breadth of the country because cancer is not for children alone, even in elders it is there.

“I visit the whole country with my foundation’s mobile clinic screening for cancer before handing those with cancer over to doctors and nurses. Whatever we find out there we hand over to them that is why I am grateful to them.

“The job they do is timeless even at midnight we find them in hospitals assisting people. I do this to show that you are not alone in this predicament, some of you may feel low because of your sick children, but I want to let you know that you are important. I know we work for our children and these are the same children we are gathered here for. Vamwe venyu munganzwe kuzvidzikisira nepamusana pekuti mune vana vane gomarara asi ndinoda kukuzivisai kuti makatikoshera uye musaregedze kuramba muchipa rudo kuvana venyu.”

Another parent, Mrs Seviria Fira said she only learnt that her child had a health challenge when he started dripping saliva.

“My child just started dripping saliva and we thought the baby had developed tonsils. We went with him to our local clinic and was given a dose for tonsils. The situation did not change, he actually became serious and was no longer eating. We went back to the clinic where we were told he was suffering the effects of the first dose. When the child received the second dose, things got worse and he was no longer talking, he lost weight, his condition deteriorated and was no longer walking,” she said.

Mrs Fira said her child’s legs got swollen and when they rushed him to a specialist, he was diagnosed with brain tumour and needed to be operated on for over US$15 000. The First Lady brought cheers to parents of children affected by cancer by giving them food hampers, soap, blankets, buckets and other basics after their interactive discussion at Parirenyatwa Group of Hospitals yesterday

“We failed to raise the money and asked to be discharged to go home and wait for God’s time. We then went to Parirenyatwa were we got help and since then there is great improvement even though the child cannot speak. We want to thank the hospital and Kidzcan for their support,” she said with a smile. Her case was, however, different from one parent who got to know of her child’s condition after falling from a bed.

“One day the child fell from a bed and got a scratch on the leg, but he was okay and had no signs of pain. Three days later his body temperature yakatanga kukwira and he started vomiting. We took him to the clinic and were told the child had typhoid symptoms and was put on treatment. The child’s legs got swollen and we consulted a doctor. A scan showed dislocation, pus and an infection. Further tests showed the child had leukaemia.”

After listening to the parent’s account, the First Lady paid glowing tribute to nurses and workers in the health sector.

“We have seen you doing a sterling job and all these health challenges are placed on your shoulders. Even under the Covid-19 pandemic which has affected the country, you have done your best on the frontline to ensure our people do not continue dying. Your job is a calling from God. During my school days I yearned to become a nurse,” the First Lady said as she sought to make the environment less tense.

In explaining how she ended up at the hospital, another mother, Mrs Tatenda Chipanga said her child had stomach pains for which she was given MMT medication at a clinic.

“But the child was getting pale and weak by each day. I went to a doctor and further tests showed the child had low blood. We were then referred to Parirenyatwa for blood transfusion and it was proved the child had leukaemia.”

Amai Mnangagwa, who has a passion for the welfare of women and children, could be seen fighting back tears as different mothers gave accounts of their children’s illnesses.

Mrs Dorothy Nyakanyanga said when she discovered that her child could not walk when she reached the age to do so, she thought the child was disabled.

“Her health deteriorated until the village health workers advised me to take the child to hospital where she was diagnosed with cancer. As a family we did not readily accept it because in the family’s history no one had been diagnosed with cancer. I was given medication, but because I had not accepted the truth, I would at times skip to giving her medication saying I thought she was bewitched.”

Mrs Nyakanyanga said village health workers had to sit down with her family and explain the condition and today the child is improving.

The First Lady donated maize-meal to the hospital to go towards the ward housing children with cancer and to the mothers she donated various items and foodstuffs that included blankets, maize-meal, cooking oil, rice, salt, sugar, toiletries and goodies for the children among many other items.

Speaking at the same occasion Parirenyatwa Group of Hospitals acting chief executive officer Dr Aspect Maunganidze paid tribute to the First Lady for her visits and said his hospital had the biggest oncology unit in the country.

“We are the ones who house the paediatric oncology unit and the only oncology unit for paediatrics in the country. It is a very special ward and we call it a special. The only paediatric and quality care ward in Zimbabwe. It is a 32 bedded ward which admits children of ages zero to four. Even those who are above four and might need chemotherapy are also admitted. In 2020 we had 150 cases of different paediatric oncology cases the common being wilm’s tumour.

“It is such a busy ward because most of the patients are very sick and are coming from all over the country and they need special care, especially during and after receiving chemotherapy which as we are all aware demands a lot of patience.”

The women thanked the mother of the nation for her love and support.