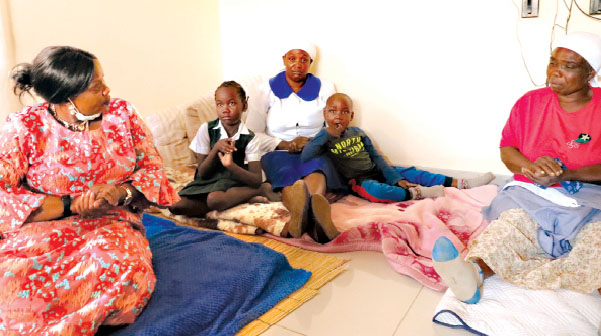 First Lady Auxillia Mnangagwa yesterday visited the family home of her aide, Albert Vunganai (36), who passed away in an accident in the Mavhuradonha mountain range during a tour of duty to Muzarabani last Friday.

Earlier, she had visited her three other hospitalised aides, who were in the same vehicle as the deceased, and wished them a speedy recovery.

The First Lady paid homage to her aide and gave mourners an emotive account of how tragedy struck.

Amai Mnangagwa was deeply moved that she joined other mourners who collected the deceased’s remains from a city funeral parlour.

She spoke glowingly about Vunganai, whom she said worked hard and acted professionally in the discharge of his duties.

She wished Vunganai’s team strength in the face of calamity and praised his parents and church for bringing up such an “upright, honest and hard-working gentleman”.

“To the family, I want to say that I am here for you and I will ensure that each time you are in need of something I will assist were I can. Kuna mai nababa vaVunganai, I thank you for raising an upright child who did not betray your family’s image. He was an upright young man who was the envy of everyone,” the First Lady said while fighting back tears.

“He worked hard with his team, giving them direction and ensuring that everything was done to perfection.”

The First Lady showered praises on the deceased’s mother for having played her motherly role well in bringing up her child, who she said always demonstrated unimpeachable integrity.

Vunganai, she added, was more of a son than an aide to her.

The deceased’s father, Mr Calvin Vunganai, said he was humbled to have been visited by the First Lady in his moment of grief.

He chronicled his family history and described his son as a hardworker.

“I wish to thank the First Lady for coming to commiserate with us in this dark hour. I have no power over God and I will have to look after my grandchildren so that they can have a bright future,” he said tearfully.

When tragedy struck, the First Lady and her team were on a tour of duty to Muzarabani, where they were distributing foodstuffs to the elderly and vulnerable families.

She also used the opportunity to raise awareness about the coronavirus (Covid-19) pandemic, which has killed thousands worldwide.

The country is currently under lockdown to prevent the spread of coronavirus.

However, this has exposed the elderly and vulnerable members of society, most of whom are food insecure, hence the First Lady’s interventions countrywide.

Vunganai was a principal security aide in the President’s Office having joined the organisation in 2008.

He leaves behind a wife Nancy and two children – Nyevero (9) and Jefferson (4).

He will be buried in Harare today.