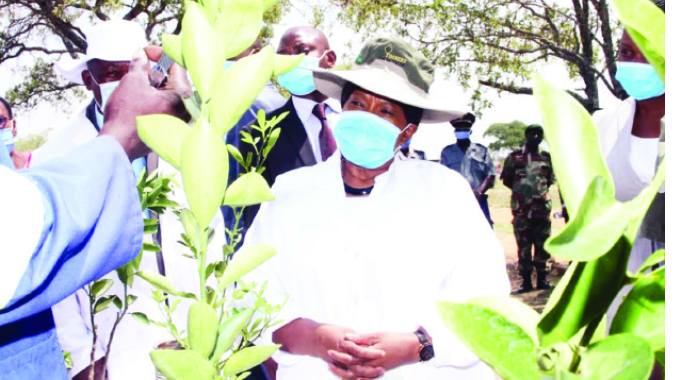 The formal campaign for national tree planting will be launched on the first Saturday of December.

Trees provide food and oxygen, while also beautifying the landscape and curbing erosion.

At Gangarabwe Primary School, the local community joined the First Lady in planting trees, with Amai Mnangagwa planting several trees, including a Baobab.

Chiefs, headmen, political leaders and the community at large, joined in planting the estimated 1 500 trees in the school orchard.

She conducted an interactive session with the elderly on the importance of trees in peoples’ lives.

One of the elders said: “Miti inotipa carbon then isusu tofema oxide.”

The First Lady noted his explanation, but swiftly corrected his narration, saying he wanted to say people get oxygen from trees and breathe out carbon dioxide.

Said Amai Mnangagwa: “I am committed to advocate, teach and lead in this pre-National Tree Planting Day commemoration campaign in all the provinces ahead of the national launch ceremony to be conducted by His Excellency President Mnangagwa.

“I would like to urge all the chiefs, headmen, village heads, councillors and political leaders to demonstrate environmental stewardship, as well as ensuring that their local areas are reforested, while the natural forests are conserved.

“Trees and forests remain a vital component of our daily lives and with many communities and industries currently deriving their livelihoods from them. It is critical for the country to recognise their importance and collectively work to conserve them.”

As patron of the environment, the First Lady initiated the programme together with the Forestry Commission after noting the rampant chopping down of trees across the country.

She implored the younger generation to embrace the culture of planting trees and conserving them for posterity. “Let us plant trees today and ensure a food secured and richly nourished nation towards attaining an upper middle class economy by 2030,” said the First Lady.

“I would also like to implore you the people of Midlands Province to desist from engaging yourselves in activities that destroy or degrade forests. Those who are illegally selling firewood should not be allowed to do so.

“Illegal selling of firewood in urban areas has caused serious deforestation across the country and should be strongly discouraged,” she said.

Amai Mnangagwa said urban settlements must be supplied with infrastructure and facilities for commercial sources of energy such as electricity, coal and gas.

Illegal settlements, particularly in protected and environmentally sensitive areas, should be discouraged.

“I urge you to practice proper land use planning and desist from reckless cutting down of trees,” said the First Lady.

“On the first Saturday of December, I, therefore, urge leadership in all sectors of the society to demonstrate this environmental stewardship so that the whole nation appreciates the value and the need to conserve trees and forests.

“I encourage you to keep on working together and remind our citizens to develop forest resources through tree planting and widen the livelihood base for both rural and urban citizens.”

Chiefs were called upon to take stern action against those who cut down trees and those who cause veld fires in their areas, to stop deforestation.

As the country’s health ambassador, the First Lady called on the people to continue observing Covid-19 measures to avoid the second wave of the pandemic.

“In this regard, let me reiterate the clarion call made by the Government of Zimbabwe to strictly observe the prevailing regulations as we plant trees across the province,” she said.

The event was held under the theme: “Fruit trees for food security and nutrition”.

Fruit trees such as mango, guava and baobab were planted at Gangarabwe Primary School.

The tree of the year is Muuyu (Baobab), also known as African Baobab in English, Umkhomo in Ndebele and Mubuyu in Tonga. The tree was chosen as the Ambassador tree for 2020 for its multi-purpose use.

Its bark makes excellent ropes, bags, hats and floor mats and produces a semi-fluid gum used to treat sores. The tender leaves can be used as relish and can be dried and stored as mufushwa.

The flowers can be eaten raw or used to flavour drinks, among other uses.

Amai Mnangagwa said as the nation implemented the devolution policy, there was need for people to start developing the raw material base for the food industry and other food stuffs in the form of fruit tree orchards, which will be processed into various products such as beverages, canned fruits, body lotions and spreads.

She called for the need to reduce the impact of climate change through planting of trees, given that drought and high temperatures were dominating across the world.

There was a moment of jubilation as the First Lady, who is the former National Assembly member for the area, having to retire from active politics when she became First Lady, reconnected with the community.

A number of senior Government officials including Permanent Secretary in the Ministry of Environment, Climate, Tourism and Hospitality Industry Mr Munesushe Munodawafa, chiefs, and Forestry Commission officials, graced the event.

Newer Post
Shamva Gold Mine resumes operations
Older Post
EXCLUSIVE: In and out of Zimbabwe with ease