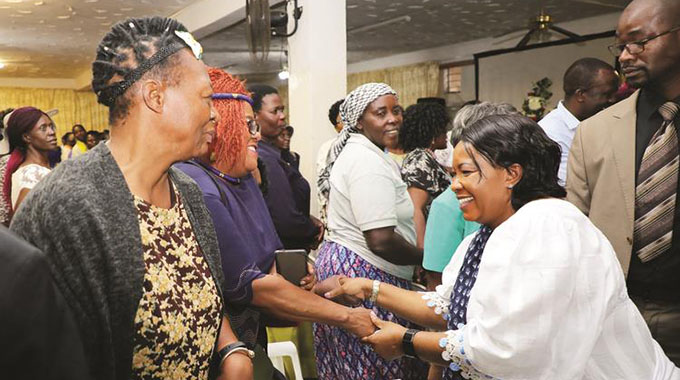 The meeting, which was the first of its kind and a precursor to countrywide interfaces between the female former combatants and the First Lady, comes at a time when the latter is advocating for the creation of a Freedom Fighters Day in line with other countries in the region.

Namibia, Tanzania, Zambia and South Africa have such days on their calendars.

The First Lady is also pushing for the establishment of a school for female war veterans, who said some of them never went to school after the war.

She urged them to come out in numbers to march against sanctions on October 25, a day set aside by the SADC bloc to call for the unconditional removal of the illegal embargo.

“I want to thank you for coming out in your numbers so that we have a heart to heart talk as women,” she said.

“You are important to us for you liberated this country. However, the war is not over yet, we have another war on the 25th (of October) where we will be fighting against sanctions.

“We want the sanctions imposed on our country to be removed. They have caused untold suffering. We also want to thank SADC for standing with us in this fight.”

She said women should support the anti-sanctions march as it was not “about a certain political party, this is about our nation Zimbabwe”.

On the issue of education, Amai Mnangagwa said those who wished to go back to formal education would be given vocational training.

“You should remain united as female former fighters so that when you speak, you speak with one voice for your benefit and for the benefit of the country.

“You should also do your projects in groups and this is only achieved if you are united,” she said.

At yesterday’s meeting, the First Lady brought representatives from the women’s bank and urged women to utilise the bank and to work with the Ministry of Women’s Affairs, Community, Small and Medium Enterprises Development.

“Amai has shown us the true meaning of love. This has never happened to us since we got our independence having a heart-to-heart discussion with the First Lady.

“The meeting was a first of its kind. She has rolled out projects for us and we are so grateful; we were not expecting this and it came to us as a surprise.

“As a listening mother, she listened to all our concerns which she promised to forward to the President. Amai will conduct similar meetings in all the country’s provinces,” said Cde Sithole.

Amai Mnangagwa promised to pass the concerns of female former combatants to President Mnangagwa. She rolled out goat-rearing projects for former fighters in Matabeleland North and Matabeleland South provinces. She also donated sewing machines for those from Bulawayo who are expected to start producing reusable sanitary pads.

Wives of war veterans and war collaborators later joined in the meeting.