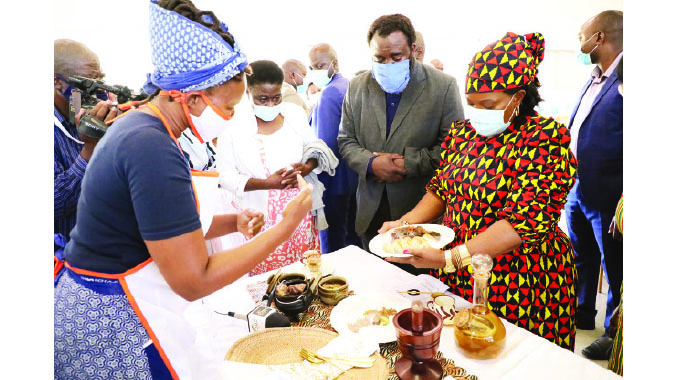 WOMEN with disabilities have expressed gratitude to First Lady Auxillia Mnangagwa for incorporating them in her traditional meal cookout competition designed to ensure people embrace traditional dishes and how to prepare them.

Describing the First Lady as Godsent, the women said they had grown accustomed to being looked down upon and being regarded as useless.

Among the disabled women was visually-impaired, Mrs Sithabisile Mhlanga, who competently prepared many innovative dishes and explained that she relied on sounds and smell when in the kitchen.

This comes as women called for the introduction of gastronomy tourism in the country in which, for a chosen week or month, people will have a chance to taste traditional dishes prepared in different parts of the country. Mouth-watering dishes were prepared to showcase what can be done to make traditional dishes more appealing.

Yesterday’s competition, which was held at the United College of Education, was unique as it included the participants with various disabilities who all sang praises to the First Lady for accommodating them.

Mouth-watering dishes were prepared to showcase what can be done to make traditional dishes more appealing.

One of the participants, Ms Courage Chipatiso, who has muscular dystrophy, said the competition had helped boost her morale and proved she could prepare dishes like any other women out there.

“I have learnt a lot from the kind-hearted women I worked with from other districts. The programme united us,” she said.

“People in the communities look down upon us because historically, people considered us useless, but the First Lady does not discriminate. She is kind-hearted and we thank her because I would not have taken part in such a programme were it not for her.”

Ms Chipatiso came up with a number of interesting dishes which showed innovation.

“I cooked many dishes like millet sadza to be served with mazondo, madora with chilli, mixed dried vegetables and dried mushrooms with peanut butter. I also have chakada with peanut butter and round nuts. I did roast groundnuts and pumpkin seeds and those of water melons mixed with butternut seeds. I roasted and salted them to come up with a three-seed snack.

“I also did mufushwa combo which is a combination of three dried vegetables — munyemba, nyevhe and tsine. I prepared this with cream and I did not use oil and other things that are harmful, but those that build our bodies,” she said with happiness written all over her face.

Ms Chipatiso urged other disabled persons not to look down upon themselves because they have capacity to do wonders if granted an opportunity to prove themselves.

“I was working with my assistant who is deaf and unable to speak. We use sign language to communicate. It was an experience to remember because it was tough, but I succeeded to even work within the given time. Most functions, I do not perform on my own, but I need assistance to accomplish them because of my condition.”

Another participant, Mrs Vimbai Hove, who is also disabled, was ecstatic to have been allowed to take part in the traditional meal cookout competition.

“I have come with my colleague Anne Malinga and we are disabled. We have come to the First Lady’s cooking competition. She is the first mother in the country to recognise us as disabled persons.

“We are looked down upon as disabled persons, but we have done wonders today.

“We are thankful and wish she continues propping us up and accommodate us in various other programmes as people with disabilities.

“It is our first time to attend such a wonderful programme. People say we do not walk, we are blind and write us off.”

“We are thankful to the First Lady for her love and let her be blessed. I urge others who are disabled not to be afraid because the First Lady sees everyone as equals. We are the same,” she said with a broad smile.

Mrs Thabisile Mhlanga, who is visually-impaired, took the First Lady through the steps she follows when preparing meals for her family.

“I am visually-impaired and happy to be in this programme because we have been given an opportunity to be part of this event as disabled women.

“It is showing that we are not lost and cast away. We are still being acknowledged as mothers despite the disability,” she said.

She said she uses sounds and smell when cooking, adding that if she was cooking meat, there is a first sound she hears which tells her that the meat has defrosted which she ignores and then starts stirring later on after hearing a second sound of meat “crying” out to be fried. She said the sounds and smell contribute immensely to her cooking process.

Monalisa Mujuru (19), a Travelling and Tourism student at United College of Education, made an appeal to the First Lady to have a similar programme specifically for youths so that they appreciate more and understand the value of traditional meals.

She said most young people were still to understand the value of traditional dishes.

She added that it was her wish one day to see youths owning their own hotel, which serves traditional food only.

Mujuru prepared Tiwi dish originally from Malawi which she said is mostly enjoyed in mines during celebrations.

Another youthful contestant, Fortune Tapererwa (30) used honey from ground nesting bees in most of her dishes while Nompumelelo Nyathi (33) packaged her dishes with creativity using modern ways that appeal to the younger generation.

In her remarks, the First Lady expressed delight that the handicapped women had proved their mettle.

“I am happy that you have competed with your fellow women and I am also happy that as women in urban areas, you have matched your counterparts in rural areas.

“We should continue doing this in our communities. I want to thank the young ladies who took part in this competition because not so many youths will be able to prepare the traditional dishes the way they did. Yesterday’s competition, which was held at the United College of Education, was unique as it included the participants with various disabilities who all sang praises to the First Lady for accommodating them.

“The young ladies appealed to have a similar programme, specifically for youths, I have heard their plea and will work with them to fulfil their wish and vision,” she said.

The First Lady urged local businesspeople to promote women who are doing projects and help them secure markets for their finished products.

The women’s projects were funded by the Zimbabwe Women Micro-Finance Bank (ZWMB).

Amai Mnangagwa made reference to one of the participants, Mrs Daina Ndoro, who grows herbs, dries and packages them before taking them to the market.

“Thank you for raising our flag high, you have put our country on the map,” she said.

Minister of State for Bulawayo Provincial Affairs and Devolution, Judith Ncube, said she was grateful that 20 chefs who participated were drawn from all the five districts of her province.

“Their dishes will give you a feel of Bulawayo. The foods represent our local culture. We should take note of the value of our cultural heritage.

“By reviving the consumption of traditional dishes, you are also promoting tourism in our country Amai. This is a nation-building programme. Your initiatives make us proud to be Zimbabweans. We thank you Amai and may the Lord give you more wisdom,” said the minister.

In yesterday’s competition, Joyce Dube came out tops followed by Zanele Ncube and they both won sets of pots and other kitchen utensils.

All participants walked away with an assortment of food hampers and toiletries.

Women’s Affairs, Gender, Community, Small and Medium Enterprises Development Minister Sithembiso Nyoni yesterday described the competition as unique and educative and praised the mother of the nation for her innovation.

“We have a First Lady who is not only an angel of hope but also the greatest innovator that I have seen. She is very innovative and she grounds her innovation. I have never worked with such an innovative driver,” she said to applause.