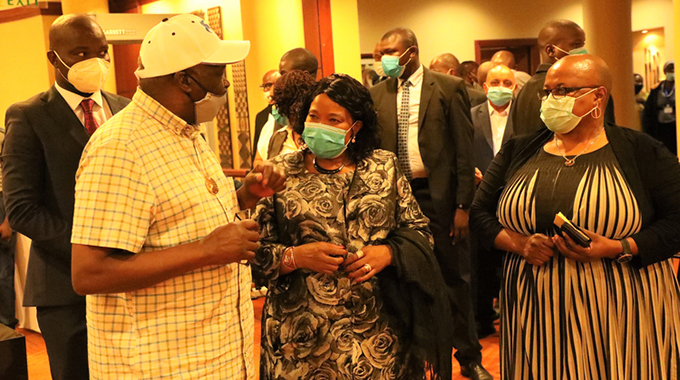 The First Lady spelt out the need for women to pull in one direction and shun the pull-her-down syndrome, which does not augur well for development and nation-building.

Addressing female councillors drawn from both rural and urban councils, Amai Mnangagwa outlined the central role women play towards socio-economic development, hence the need for them to be afforded equal opportunities in both public and private entities.

The women in local government had earlier held an indaba with President Mnangagwa, before inviting the First Lady to share ideas on the development of communities and the nation at large.

The First Lady said women needed to work together closely regardless of political persuasions to develop the country.

“First of all I want to congratulate you for what has happened in your life for the first time in 40 years. This is a meeting that we must not forget madzimai, it has never happened. If you look beside yourself, maybe you have never looked at that woman next to you closely because of partisan issues. But today we are all in one room as women for a good cause.

“I also want to thank the President who listened to what women had to say because he knows that with the involvement of women zvinhu zvinofamba. Now I am saying ladies, because you have been given what we asked for, let’s go and do it.

“Show the world, show the country and also show the President himself that what you have done to us, this is what we are, women can do it,” she said to a thunderous applause from the councillors.

The First Lady said women played a greater role in society since most issues affecting families needed to be addressed by them and they needed to work hard and educate each other to spread knowledge.

Noting the agreement to develop quickly the mechanisms to ensure at least 30 percent of councillors were women, she urged the councillors to work hard to reach 50 percent.

“Being a woman involves working hard, uniting the family, nation building and being able to assist others in life, especially the vulnerable members in our communities,” said the First Lady. “Madzimai let us go and work, you are the pillars and backbone of the country.

“Your failure to unite will not bring any development that benefits our country. Your disunity will also hinder progress in our children’s growth.”

The mother of the nation implored women to assume responsibility over all children and not to hesitate to provide wise counsel whenever the need arose.

Amai Mnangagwa, a hands-on person, said she wanted women who were committed to hard work and using their hands to work.

“I want women who are committed and who can ‘run’. I will roll out my programmes in your communities,” she said. “All women councillors, I shall pay your areas of jurisdiction a visit. Ngatishandei pamwechete madzimai.”

The First Lady emphasised that women must do away with gossip and channel their energy towards things that were progressive and beneficial to the nation.

She urged women to vote each other into positions of influence.

This comes as the representation of women within local authorities declined from 18 percent in 2008 to 14 percent in 2018.

“Now that I have seen that this kind of unity is possible, let us go and vote for each other as women so that the numbers go up in Parliament, at workplaces and in influential positions,” said the First Lady. “But the greatest undoing is that we have a Pull-Her-Down syndrome. Why do we speak ill of each other as women? Let us do away with hate speech.”

The First Lady added, “As mothers we want to show the country and the world that once women are united, things become possible. This meeting has opened doors for us to have so many more meetings and scale up humanitarian activities within communities.”

Amai Mnangagwa said it was critical for women to be organised and work together.

“There is no nation-building we can achieve if we are not united,” she said. “If we work hard as women, chances of gossip will decline. We were created in a funny way, full of gossip and after gossiping we set about destroying each other.”

Earlier, leader of the opposition in Parliament and MDC-T leader Dr Thokozani Khupe had said it was disheartening that women did not occupy higher positions in most settings, yet they constituted over 52 percent of the country’s population.

“Women constitute 52 percent of the population,” she said. “Women contribute more than 80 percent to the Gross Domestic Product. Half of the food consumed in this country comes from a woman’s hand.

“Women are creators of wealth because more than 70 percent of people in the informal sector are women.”

Dr Khupe paid tribute to the First Lady’s hard work and said she was a typical example of hard working women in the country.

“Women work 10 times harder than men,” she said. “I see it from you Amai because you are all over working hard and I think women can testify to that. Having said that, the sad reality though is that there are very few women in local authorities which is the reason why we are gathered here.”

Dr Khupe said the word woman was pregnant with meaning, before splitting each of the letters that make up the word.

“But more importantly N stands for nation builders. Women are nation builders because we carry babies for nine months, we give birth to them, we nurture them to be who they are.”

Dr Khupe urged Zimbabweans to cast aside their political differences and work for the good of the nation.

Amai Mnangagwa has a passion for the advancement of women’s welfare as seen by her relentless interventions to improve their welfare through income-generating projects and introducing them to financial literacy, among a host of other empowerment initiatives.

Women across the length and breadth of the country now boast of nutritional gardens, goat-rearing ventures, poultry projects, soap-making and sewing clubs, courtesy of the First Lady and her Angel of Hope Foundation.

Always leading from the front, the mother of the nation also cares for the health of women through breast and cervical cancer screening sessions to ensure early detection and timely commencement to treatment.

She has also been assisting previously marginalised communities like the Doma in Kanyemba and the San in Plumtree as she works hard to bring people together and improve the welfare of the country’s citizenry.

Gender organisations have also hailed the First Lady’s humanitarian efforts, describing the initiative as a critical plinth to upholding the livelihoods of vulnerable families across the country.