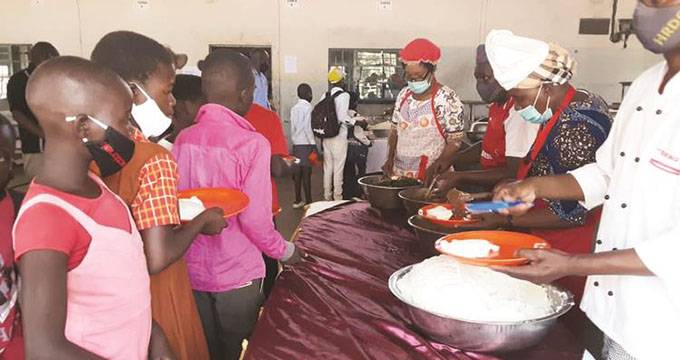 The programme was launched two weeks ago by the First Lady at Chemhanza High School in Wedza and has so far benefited over 1 000 vulnerable children.

Senator Munzverengwi said: “As a province, a lot of people have benefited from Amai’s charity works, including the elderly, people living with disabilities and the disadvantaged, as well as vulnerable children.

Chief Svosve said the feeding programme was proof that the First Lady was a loving and caring mother. He urged all mothers to follow her good example.

“Children are a gift from God and the feeding programme by the First Lady shows that she is a caring mother,” said Chief Svosve. “We look forward to more charity works from Amai.”

Cde Machakaire said: “As a constituency, we are thankful to the First Lady for bringing joy to our children. We have been affected by drought as a nation and most villagers are finding it difficult to feed their families.”

Villagers who spoke to The Herald expressed their gratitude to the First Lady for bringing the programme to ward level.

One of the villagers, Anastacia Musekavanhu, said she was glad that her grandchildren had benefited from the First Lady’s benevolence.

“This programme has not only benefited vulnerable children, but also us the elderly people who are having challenges of bringing food to the table,” she said.

Another villager, Winnie Chiutsi said: “We want to thank the First Lady for such programmes. We are learning a lot from Amai’s charity works.”

The feeding programme will cascade to all the country’s eight rural provinces.

The nationwide school feeding programme has been rolled out by Amai Mnangagwa through her Angel of Hope Foundation and is expected to reduce the number of children dropping out of school owing to hunger and malnutrition.

The initiative by the First Lady builds on the national and regional thrust to promote nutrition of schoolchildren, as well as fight hunger within the education sector. Droughts experienced over the last two farming seasons have exposed many families to food insecurity.

The worst affected are schoolchildren in rural areas who endure long distances to attend classes, some of them on empty stomachs, which has contributed to a high drop-out rate.

However, this situation is being addressed through school feeding programmes introduced by the First Lady that are targeted at addressing poor school performance due to malnutrition and hunger. Pupils will be served healthy porridge, traditional food such as sadza, dried vegetables with peanut butter, beef and beans. The initiative is one of the response strategies to cushion communities and the feeding scheme is complementing Government efforts to enhance retention and performance of pupils.